If you feel like reliving the historic days that occurred seven years ago, then here are 10 films that capture their beauty and their shame. 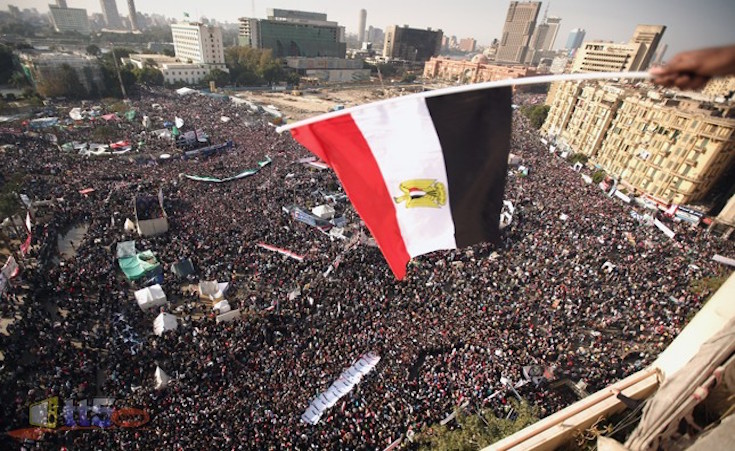 January 25th 2011, remains one of the most pivotal and historic moments in modern day Egyptian history, although it is unclear whether for many it is day to fear, celebrate, or mourn. Amidst the heightened security and warnings against protest tomorrow, we decided that if you are staying home, that these post-Jan-25th films will remind you of that special, yet scary moment, when Egyptians said enough is enough.

Premiering at the Cannes film festival, this film revolves around the 18 Days of the revolution, compiling 10 short films directed by 10 major Egyptian directors including; Mariam Abou-Ouf, Sherif Arafa, Youssry Nasrallah, Marwan Hamed, Kamla Abu zekri, and Ahmed Abdallah. Enlisting an equally impressive cast of acting superstars that includes; Ahmed Helmy, Hend Sabry, Mona Zaki, Asser Yassin, Amr Waked, Emy Samir Ghanem, Bassem Samra, and Ahmed El Fishawy, this film is definitely one to watch if you can find it. Appearing and disappearing off the internet this film is tough to find, but not impossible, and is definitely worth the watch if found.

Directed/written by Yousry Nasrallah and starring Menna Shalabi and Bassem Samra, Apres La Bataille follows the story of Mahmoud who was part of the armed groups that were coerced to carry out attacks on protestors in Tahrir Square on the 2nd of February 2011, in what is known to many as the Battle of Camels. In the aftermath he lost his job and became an outcast in society, bringing his family to near ruin, before meeting Reem, a secular young ecologist from a wealthy neighbourhood, shining a light on the two worlds that exist in Egypt separating its rich from its poor.

Arguably one of the most talked about documentaries to emerge from a post-Jan-25th world was none other than Jehane Noujaim's The Square. Starring the Ahmed Hassan, Khalid Abdala, and Magdy Ashour, among others, this documentary was quickly picked up by Netflix, before Netflix even arrived in Egypt, and is one of the finest documentations of the events that forever changed Egypt by following a group of Egyptian revolutionary battle leaders as they risk their lives to build a new society.

This movie is a sequel based on true events and although it isn't focused on the events that transpired in Tahrir Square, it is a true story surrounding drug dealer Ezzat Hefny's escape from prison during the January 25th revolution. This prison escape is a pivotal event as it was during this prison break that Mohamed Morsi would escape and eventually lead to his election as Egypt's first democratically elected President.

While many will say that the revolution started in Tahrir, Ahmed Nour's Waves/Moug shines a light on Suez, and argues that their historical struggles and hatred for Mubarak ultimately led to his ouster. Whether you agree or disagree, the film's strength lies in highlighting Egyptians beyond Cairo, and using a mixture of animation to creatively tell a Suez story which is often overlooked.

Tahrir 2011: The Good, Bad and the Politicians

Directed by Ayten Amin, Tamer Ezzat and Amr Salama, Tahrir 2011 focuses on Egyptians striving to achieve the goals of the revolution in the aftermath months after Hosni Mubarak was removed. Although many left the square following his toppling, those looking for change beyond the regime remained, and this film structured in three chapters attempts to playfully debunk misconceptions and stereotypes.

Cairo Year Zero is a fictional story that culminates months before the 2011 Egyptian Revolution, focusing on four young friends. This film is a actually a short, and although it doesn't document the events that transpired on January 25th, it does examine the relationships of a group of friends, whose fallen comrade becomes an unlikely revolutionary symbol.

Directed by Francois Verster, Dreams of Sharazade is a creative feature-length documentary film that captures the Arab Spring in Egypt and Turkey, while creatively intermixing it with the iconic tale of the 1001 Arabian Nights. Weaving between the tales of Shahrazad and the Arab Spring, the film is creatively gripping using a performance of Rimsky-Korsakov's Scheherazade as musical device to build or add to the tension of political upheavals.

Directed by Hala Khalil, Nawara is a sharp social critique that really highlights how screwed the poor are in Egypt. Set during the 2011 revolution, Nawara focuses on an Egyptian maid played by Menna Shalabi, who works for a wealthy politically connected family in an exclusive Cairo gated community. The film is another examination of the worlds that exist in Egypt that is seperated merely by wealth. The award winning film received rave reviews debuting at DIFF (Dubai International Film Festival) and is an excellent film that highlights that the goals of the revolution were trounced and the corrupt power players have returned to resume their roles with no accountability.

Diaries of a Correspondent

A nightmare captured by the camera of Egyptian correspondent Mohamed El-Sebay spanning the last six years of his work during Mubarak's reign leading to the revolution. Written and directed by Mohamed El Sebay, it a unique and often unseen look into the life of a correspondent cleverly embodying the bitter reality lived by the Egyptian society.