Celebrities love to visit Egypt, and we love to have them, but when they visit, the nation goes mental. Ahead of Yanni's concert, here are some lessons Eihab Boraie would like everyone to consider to keep you safe and hopefully end the cycle of questionable headlines every time they visit. 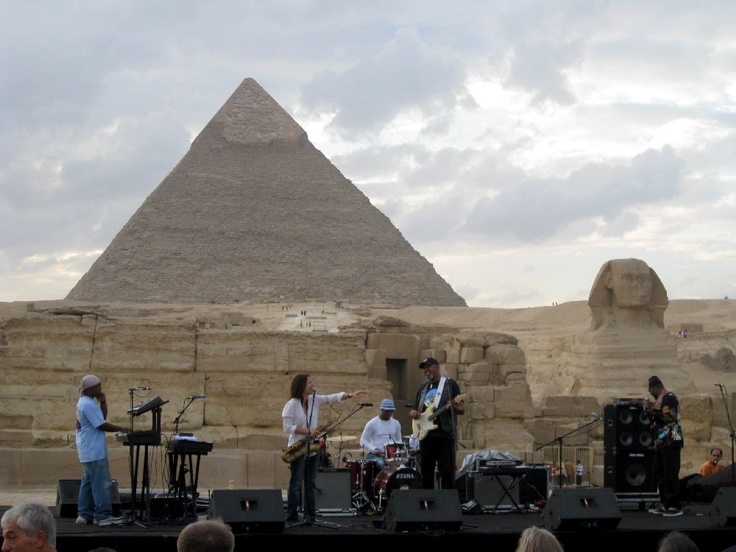 Confusing is society’s desire for fame, but more baffling is its ability to drive the so called fame-less into mass hysteria at the simple presence of someone who possesses its power. The cost of fame is simply a loss of privacy, and this is true almost everywhere, and sadly Egypt is no exception. When a celebrity comes to visit, the country collectively seems to lose its minds, giving these famous visitors a negative perspective on both Egypt and its people. With Yanni set to perform tonight at the pyramids, we decided to look at past visits and performances by international superstars, to see if there are lessons Egypt can learn from, to avoid making the same embarrassing mistakes that continue to hurt the nation’s image.

Lesson #1: Cheap Tickets May Exist But Come with High Risk

Purchasing the cheapest ticket is an investment that is never really worth it. If at the time of purchasing tickets the organiser can’t exactly tell you were your section is located at the show, then save your money and time. At the same time one must also consider how many ticket price levels are being sold. If a show is selling tickets for 1000LE – 150Le, with several packages in between them, then prepare for an experience more horrific than any trip to El Mogama3. One needs to look no further than the debacle that was the Akon concert of 2009 for evidence. According to several websites and comments from people allegedly at the show in the cheap seats - who are we kidding there were no seats - that area was nothing but a small barricade without a real view of the show. According to blogger Sarah Carr, who allegedly witnessed the event, she explained that the “LE 150 area wasn't in the toilets, it was mostly between the toilets.” Clearly a waste of money, but also brings us to Lesson #2.

At the Akon concert some fans opted to purchase the 2nd cheapest ticket, thinking it would be a better experience but alas it wasn’t. Still far away from the stage, the only divider separating them from the cheaper tickets was a flimsy barricade and a few security men. Once anger reached a fevered pitch, those who paid for the cheapest tickets stormed the barricade and got to enjoy the show from the second cheapest ticket level, saving themselves a whole 100LE for the same experience. “Suddenly and spontaneously the LE 150s made their move, storming and knocking over the barrier before charging, cheering, into beautiful freedom. The bodyguards were hopelessly outnumbered by pubescent teenagers and a DNE hack, and conceded defeat,” describes Carr. As one could imagine, this breakdown of barriers resulted in fights erupting between ticket holders who were packed tighter than sardines in a tin can.

Lesson #3: The Most Expensive Tickets are Not Always the Safest

Egypt’s unfortunate habit of quantifying poverty is always highlighted at these events. When tickets are offered to the A class, they are usually given the best private view. At the Akon concert those who paid a 1000LE were put on a stage, as to not be confused as a member of the B or C class. Most concerts around the globe will offer higher ticket prices for the best seats, but only in Egypt would they erect a stage for the wealthy that actually blocks the view of those behind them. That stage then proceeded to collapse, leaving six people injured. Instead of being held accountable for a total failure in security, especially in the cheap seats, the organiser was detained for endangering the lives of the rich, who apparently suffered only minor injuries.

A big event comes with long waiting times and even bigger traffic jams. If you are ready to spend hours in traffic, then waste hours standing around waiting for the performer to show, then spending arguably more time in traffic trying to leave, then a Pyramid party is your place to be. The time investment is rarely worth it, especially considering that sets can range from 30 minutes to an hour. At the Shakira concert at the pyramids, there was so much traffic going into Haram, that most of the guest arrived after Shakira had finished her brief set. People had to walk for miles across the desert to get there during a sandstorm. Adding insult to injury it didn't matter whether you paid 750LE, 1000LE or 2000LE; you were put in the same place anyway. Even if you make it there in time to catch the show, you could find yourself waiting for hours. In the case of Akon he arrived up to four hours late, because surprise, surprise, he too was stuck in traffic.

You may not get your money back from a terrible show, but you will witness Egyptian incompetence at its finest. Whenever Egypt hosts a big time event, they fail to deal with recurring incompetence. Sure there was the stage collapse at the Akon concert, but who could forget when we almost set Mariah Carey on fire at the Etisalat concert? There are no shortages of examples that range from hilarious to horrifyingly tragic.

In Egypt getting ready to go on stage and suddenly there was a surge of power and an electrical fire started under my feet! Wtf?!

Lesson #6: Security Will Always Be a Concern

Sure security will be hired, but there is never a guarantee that they know what they are doing. At the Enrique Iglesias show, reports of people getting beat up with belts emerged, and conflicting rumours that even Enrique was attacked. Couple with the failures at the Akon concert, and just about any event in Egypt is a security risk. It certainly doesn’t help when idiots like Akon think it is a good idea to crowd surf. As one could imagine he ended up crying for help, and was rescued by security that used force against paying fans to get him out of there. At the Tiesto concert in Sahel, security guards took bribes to allow fans to get closer, only to alert other security guards that they didn’t have the required pass and havd them kicked out. Simply security is the worst.

Lesson #7: Even If There isn’t a Controversy, Egypt Will Make One

It is still unclear if Enrique was attacked or not. Various media outlets reported that he was, going so far as saying he would “never perform in Egypt again.” And yet, Enrique took to social media to express that these rumours were not true. Why then, the controversy? Who knows. Just last week, Morgan Freeman was in the city filming a documentary. Egyptians were rightly excited about the film legend being in town, however within 24 hours reports started emerging that they didn’t have the required permits to film. We didn’t break the news, but with multiple reports writing about we decided to share the news, as Egyptian incompetence knows no bounds, and getting permits is one of the toughest things to achieve in Om el Donia.

Lesson #8: No Celebrity Will Visit If You Leak Their Itinerary

Katy Perry aka Katypatra wanted to celebrate her birthday in Egypt, possibly as a way of celebrating the fact that her Egyptian inspired music video was named the most viral video of 2014. Planning a Luxor getaway, Katy ended up cancelling her plans after publications released everything about her trip from where she was staying, to what she would visit, and so on. Clearly, no celebrity would invite a population of 90 million to her birthday, and so unsurprisingly she cancelled her trip. In the case of Morgan Freeman, we at CairoScene were told where he was staying. Although releasing the information would help hits, it would also scare any future celebrity from visiting. That being said, let’s all just take deep breath and respect their privacy. If you really want to see the legend in person, then wait for them at the Pyramids, they could use the extra visitors, and no celebrity shows up here without visiting them.

Lesson #9: Not Everyone is a Celebrity

Yanni meen Yanni? It’s hard not to notice Egyptians losing their shit over an Adult Contemporary (that's his musical genre, no joke) alleged superstar. The genre is boring, and frankly elevator music sounds more cutting edge. Clearly, Yanni attracts his own ageing crowd, but when asking the older generation "Who is Yanni?" very few could even name a single one of his songs, instead referring him to the man who married “Dynasty” actress Linda Evans. They aren’t even married anymore; we presume she too wasn’t a fan of his music. Perhaps we have gone too far, but nothing sounds more outdated then Yanni’s ‘New Age’ music. The whole event reeks of being a PR stunt, to show that Egypt is a safe destination, and Yanni seems all about constantly talking about how safe he feels, even helping put together a promotional video to boost tourism. Let’s be honest no one will flock here because Yanni was here, because those who know him are too old to travel anyways, and it’s not like the Pyramids are Vegas, and Yanni will be playing every night. Let’s just be thankful for that.

Remember when Amal Clooney was here for the ‘Al Jazeera 3’ trial? Not actually a celebrity, but rather a human rights lawyer, the press ignored that fact she was here to do her job, proving that there is some weird fascination with those who marry celebrities. Instead of talking about decaying press freedom, the Egyptian press seemed more obsessed with covering the size of her wedding ring, forgetting she was a lawyer, referring to her as ‘Actor’s wife’. It was a sad embarrassing episode, one that seems to be repeating with Yanni, whose press conference was filled with questions that would embarrass any nation.

From 50 Cent to Justin Bieber, Egyptians often get promised big acts that are supposedly coming only to find out it was all bullshit. This happens entirely too much and tends to be the fault of event organisers who think that it easy to book million dollar acts without securing funds or a venue. If the act is a big name then we advise being skeptical until the actual celebrity lands, conversely if we are talking about a musical act like Yanni, then expect he will be here, as no one cares about Yanni. That being said we would like to thank Yanni for coming here for promotional purposes, but could do without his so-called music.

Event organisers, authorities, fans, press, and just every other Egyptian needs to understand that celebrities owe them nothing, and that collectively we must change our habits. It is no secret that every time Egypt embarrasses itself it becomes global news, especially when it involves so called celebrities. That being said, hopefully Yanni will come and go without leaving us with a viral controversial headline that nation has to try to explain, but knows it can’t.