Egyptian women excel across a broad spectrum of fields – singing is definitely one of them. 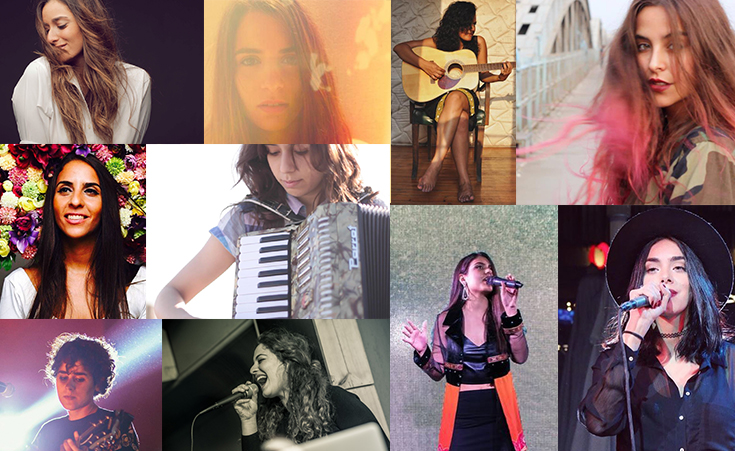 Amid the chaos and commotion – all the anguish, fear, and disgust that is our daily lives here in Egypt - comes a voice of beauty, a voice of peace, and a voice of 'I-don't-give-a-fuck about the world, I'm just happy I'm singing'. These voices belong to several young Egyptian women, some of whom are currently enjoying superstardom while others are still climbing their way up. Their voices catapulted them onto our list that we think best represents the huge sea of beautiful, angelic, and sometimes rambunctious female voices we have within our country. Note: the list is in no way extensive, we just picked 17 from amid the cacaphony. A beautiful girl who can sing and plays the accordion really well? Okay, we're sold on Youssra El Hawary. Her songs encapsulate the vision of a nation distraught, political at times, and at times solely handling societal concepts and dogmas - one thing is for sure, they are all very upbeat and chirpy. In one of her songs, entitled The Wall, a man is making pee pee on the wall. Egyptian folklore/rock fusion pioneer Sheriene Abdo's music is soft and melancholic at times – her voice velvety, her sound smooth. At other times it's rambunctious, with rock influences showing in streaks across her music. The Egyptian-born artist has been singing professionally for only five years now, accomplishing what other artists could barely fit into a decade. X-Factor Arabia finalist, Young Pharoz singer, and all around music aficionado Shahd El Shaarawy is hailed by some as one of the best upcoming female vocalists in the country. Her voice is strong and very soulful; she covers songs like Adele's Hello and several other difficult songs with ease. Cassis started singing in church choirs, where she got major experience and later went on to sing jazz, blues, soft rock, church rock, and pop songs. The Egyptian vocalist has been garnering quite a large number of plays on her Soundcloud account, making us think that church rock is not dead. Her music is upbeat and her voice angelic, featuring on Khaled Hussien's latest single, Donya Gdeda. A young Egyptian girl with big dreams, Saba is a signed Sony Music ME artist. Her songs are heavily inspired by urban pop with jazz and hip hop influences. Noted by several international publications as "Egypt's rising vocal diva" and "the Egyptian singer set to make waves," Saba's voice is amazing. Her song Snow has been making huge waves across the world, playing on international radio and television stations. Egyptian singer/songwriter, producer, and most importantly talented vocalist, Nadah El Shazly started out learning to sing opera before becoming a punk rocker where she covered bands like The Misfits. A powerful yet subtle voice carefully supplementing her productions, her music now involves an experimental hip hop-ish sound. Her vocals are inspired by 40s and 50s Egyptian songs, very ethereal. The Egyptian girl that has been taking over the punk rock scene in her own country and beyond, May Mansour has been living in London for well over five years now, part of punk rock outfit Shot! Mansour has been making massive waves with her vocal gimmicks - mainly screaming into a microphone for an extended length of time, every time. Singing runs in the Mansour family as Malak – May's younger sister – is also a vocalist, with her voice appearing on several releases by talented Egyptian producer Fulltone. Malak is currently working in refugee aid in Europe where she sings to refugees fleeing the war in the Middle East. No, we're totally kidding; she does help refugees, just not with singing. Egyptian singer/song writer Malak El Hussieny took part in the Middle Eastern version of X-Factor, and the rest – as they say – is history. She is currently one of the most easily recognised voices in the Egyptian indie/pop scene, garnering a huge following from fans inside the country and overseas, playing her music at a slew of different venues. Alexandrian-born and raised, Massoud moved out of her home at 19 years old, came to Cairo, and never looked back. She now lives in Paris where she performs regularly, but not before having covered the length and width of Egypt, learning folk music in all its different forms. Her music is a fusion of different folk sounds and an amalgam of different styles from around the world - international music. A regular fixe in Cairo's live nights, El Wedidi has been making massive waves with her music. After joining the El Warsha Troupe during her university studies and training with Grammy award winner Fathy Salama, El Wedidi knew what she wanted to do with her life. Adding to her list of achievements, she also won the Rolex Arts Initiative, granting her training sessions with Brazilian artist Gilberto Gil. What's there to say about Bosaina? She's the Egyptian girl with a massive amount of international gigs under her belt who burst onto the scene with Wetrobots, who were apparently in love with her. Lately she's toured Europe several times, playing at several world renowned locations including Barcelona's Sonar festival. Her music is experimental, with a touch of post-industrial techno influences. Aya Metwalli is an Egyptian female folk, pop, anti-pop, avant-pop, trip-hop, dark wave, post-punk, electronica, noise artist. Her vocals are melancholic, spunky at times – always very smart and witty. She's currently über famous for her contributions and is at the forefront of the sounds she plays, within Egypt and elsewhere. This prolific Egyptian actress who needs no introduction is also a vocalist. Her work with Soopar Lox and her solo work are beyond comparison with anything that was on the scene at the time. Hailed as one of the most beautiful voices of the underground scene, Amina Khalil was one whose gigs were fully booked days in advance, and that was before her major breakthrough as an actress. One of the most upbeat personalities you will ever meet in your life, Amy Frega started singing as a kid in choirs. "I took voice lessons in university where I majored in performance and music technology," she tells us. Pop, jazz, and classical are the highlights of Frega's sound. Performing in several different venues across the city, and currently in the process of creating original songs, Frega has her work set out for her. The jazzy sounds of Noha Fekry are sultry sometimes – at other times, soulful. She blends old classics with jazz, flipping the coin on some Egyptian favourites and making them into jazz renditions. She joined the Cairo Celebration Choir, and that was her start in the world of singing. Now she sings solo and with different artists, taking the lead in the jazz vocalist arena. Multi-instrumentalist, singer/songwriter, media guru, and go-getter mom, Daliah Galal does it all. She started playing instruments when she was four and sang for the first time in university, and later with her band Carousel. Married to famed video blogger Marwan Younis - who played in the same band as her when they were younger - we have a feeling their son Gaby (pictured above) is going to become one heck of a rockstar. Looks like he's already well on his way.