5 Movies You Simply Must Watch This Eid

It's that time of the year again to line-up at the mutliplex. 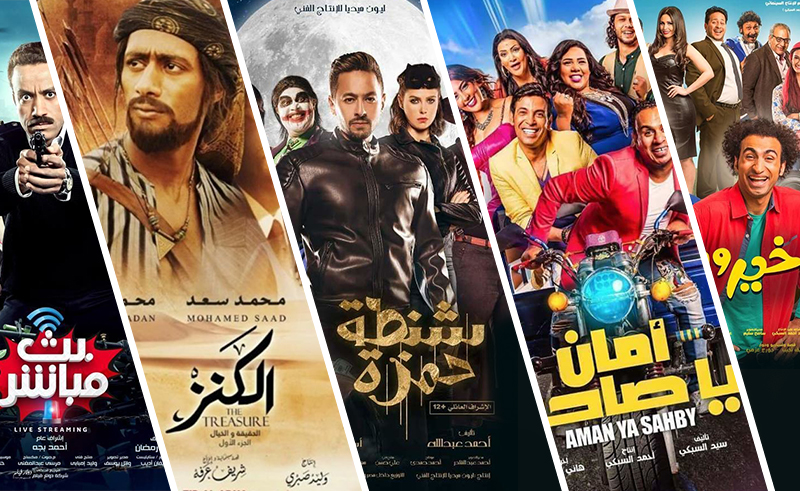 It's Eid again, and you know what that means. It's time to start blindly looking at cinema guides and ponder over the amazingly rich choices of movies to be hitting the silver screen this holiday. In a parallel universe, they'd all be worthy of a countless number of Oscars. Don't bother making any other plans as you will be simply wasting your life away as you tragically miss out on these spectacles.

Mohammed Ramadan makes his third appearance in the summer blockbuster season this year, as a Mamluk era...something. At this point, we should assume that obviously fake facial hair must be some artistic choice which the Egyptian cinema industry made many years ago. Any criticisms of Egyptian male actors not growing out natural beards and moustaches is simply unjustified. The Treasure also stars Hend Sabry, Amina Khalil, and Ruby. The Pharoanic, Mamluk, and early 20th Century are all simultaneaously depicted in a multiple-period historical drama thriller. The official synopsis on youtube claims that the movie takes places across "four eras, and they are the Abbassid, Ottoman, Pharoanic, and 40s, and even the 70s." I counted five there, but what do I know? The synopsis on elcinema.com is as mysterious as the trailer itself, discussing corruption and how religious figures have abused their power since the beginning of time by mixing faith and politics. Really? That happened? Who knew? At least it's not the usual action-packed drivel that's been on all summer.

The ubiquitous Sobky brings us another comedy this holiday season, starring Ali Rabei, Mohammed Abdelrahman, and Mai Selim. The plot follows two young men (Ali Rabei and Mohammed Abdelrahman) trying to look for a job they can hold down, whilst causing absolute havoc and mayhem on their rampage across Cairo’s job market. In every job they manage to get hired for, they somehow find some way of royally screwing it up. In the trailer, Mai Selim seems to be coming across as some femme fatale mobster villain who’s after the two main characters for messing it up just one too many times for her temper. This movie features one thing which has probably never before been witnessed in Egyptian cinema, not for a long time at least. A woman slapping a man. Men smacking women across the face is a staple in the Egyptian television and film industry, but considering our Machismo culture, the flipside is quite progressive, relatively that is. Another unique selling point of Khair Wi Baraka is that it is probably the very first movie in the history of the world to feature a snapchat filter on a character. Great production value. A seminal moment in cinematic history perhaps? Only time will tell. This is just your standard Eid comedy with all the same prop jokes and gags that have been executed over and over and over and over again since time immemorial. If it works for you, it might be worth a watch. If it doesn’t, read on. One more point though. After the Belly dancer-less Horoob Edterary (Forced Escape) and Gawab Eatiqal (Letter of Arrest) that came out earlier this summer, Sobky’s trademark belly dancing scenes make a grand return in this one.

The trailer for Shantet Hamza is certainly…interesting. At first you think it’s a serious, frown-faced thriller, then bits of dialogue that seem completely out of place make their way in. They feel odd because they are reminiscent of the tone that Egyptian actors bellow in when they’re trying to be comedic. Then it shifts back to being serious again, and then again some silliness which you try to wonder if its intentional or tragically poor acting. The plot revolves around apparent conman Hamza (Hamada Helal) who either stole or lost a big bag of money, or just doesn’t even remember and has become the undeserved victim of a rat race to retrieve it. All that matters is the central struggle of this movie is the bag which belongs to Hamza. Note the torture scene which suddenly features someone impersonating Christopher Nolan’s take on the Joker. Your guess is as good as mine.

Bath Mubashir comes across as a confused half-serious comic action thriller, yet a little more sure of itself than Hamza’s Bag. Sameh Hussein stars as the main character who is a suspended police officer named Faris, according to the synopsis at least. In the trailer, he goes plain-clothed and is still trying to solve cases (despite being suspended), with that very traditional, macho angry face and strict voice. Faris is trying to crack a growing number of corruption cases involving notable officials and businessmen, whilst a pundit follows his every move and streams it live on TV and social media to a massive audience. It’s not clear as to why Faris is so interesting to the point that he warrants such close-eyed attention. It is neither clear why the comic factor is necessary. Could it not just have been a neo-noir cop thriller refitted for the social media age in a Black Mirror kind of way? Hell, what do I know.

Out of this entire list, this one really takes the cake. After featuring no belly dancers in two of his biggest blockbusters this summer, Sobky really threw the kitchen sink at this one. The trailer opens up with an invasion of belly dancers of all shapes and sizes twisting away to entertained crowds across different venues. A star-studded cast which features folk music kingpins Saad El Soghayar, Mahmoud Elleithy, and Abdelbasit Hamouda, the story is about two down-on-their-luck folk singers (Soghayar and Elleithy) who are struggling to make ends meet in a music scene now dominated by DJs and electronic musicians. Abdelbasit cunningly proposes a masterplan to help the young men escape their poverty: marry women from rich families. The men then eagerly set out to find their suitors from Egypt’s upper tax brackets. They stumble upon two women played by Safinaz and Nirmeen Maher which they miraculously convince to fall in love with them, but not all is quite so clear and simple. Their romances become embroiled in a whirlwind of jealousy, patriarchy, and fragile male egos when the women’s brothers aren’t too happy with their sisters’ matrimonial choices. It’s a typical Sobky movie. Lots of Sha’aby music, belly dancing, textbook gags, slapstick humour, hysteria, and copy-pasted screenwriting. Maybe just leaving Cairo for Eid doesn’t sound so bad afterall.