A Good Day To Die Hard

Is five too many Die Hards? One was too many, says our resident film buff Wael Khairy. Read on to find out why he thinks it’s a good day to retire the franchise… 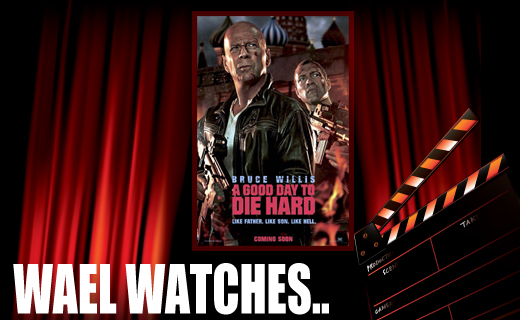 A Good Day to Die Hard is the worst action film I’ve seen in years. John Moore, a filmmaker who hasn’t directed a single good film in a career that spans 23 years, directs the weakest of the Die Hard anthology. The fifth installment is set in Russia and even though poking at Russia hasn’t been “in” since 1985, the film does follow the series’ horrible formula. You see, as the anthology went along, the terrorized area expanded with it.

In the original classic, the threat was concentrated in a building. The second took place in an airport; New York was at risk in the third, and for the fourth film, the threat expanded nationally, putting the United States at risk. Naturally, what’s at stake this time is international in scope. I read somewhere, they’re making a sixth film; maybe rereleasing Armageddon in theaters with a different title would crack the universal extension of hazard. Anyway, the scope expands, and each sequel is worse than the one before. It doesn’t take a genius to do the math and see what they’re doing wrong.

That’s not the only problem. This is a perfect example of product placement completely ruining a picture. Mercedes-Benz is the official sponsor/distraction and they most definitely got their money’s worth, because A Good Day to Die Hard feels like an hour and a half Benz commercial; a very bad Benz commercial at that. Seriously, all the villains ride BMWs and we even get a shot of them all exploding. There’s another shot of the G-Class crushing a Porsche, and in one ridiculous scene the G-Class slams into a tank and drives it off a bridge, when it reality the car would fall apart merely touching it. Anyway, the product placement spans the whole runtime of the film and the Mercedes-Benz logo gets more screen time than Bruce Willis.

Which leads me to another issue I have. Whoever wrote the script should’ve capitalized on the fans love for John McLane. Not only does he share the action with his son, who is played by a horrible actor (I didn’t even bother looking up his name), but he also bores us with cheesy father-son talk in a film that is supposed to be anything but lovey-dovey. Finally, what we loved about John McLane in the past was seeing him all bruised up and barely in shape to save the day. Remember how cool it was in the first one when he walked barefoot on glass? Here, McLane is virtually invisible. He doesn’t get shot once while walking through showers of bullets. As a chopper tries to crash the floor he’s in, he jumps off the window and gives the pilot the finger mid-air for fuck’s sake.

Apparently, McLane has evolved into a dumb character too. I’m serious. He goes to Russia to see his son, but nevertheless keeps saying the horrible catchphrase, “I’m on vacation.” No, dude. You’re not on vacation; you booked the flight to see your son one last time before he gets sent to jail; idiot. Anyway, I kept watching the film hoping I’d at least get my money’s forth in the traditional badass “Yippe-Ki-Yay” scene, and guess what? He utters the line and a freaking Benz saves the moment. It’s a good day to retire this franchise.