Niveen Ghoneim chats with artist Hady Boraey who, with moving patterns, contrasting colours, and piercing insights, creates a tragic and dramatic world as he deconstructs our own. 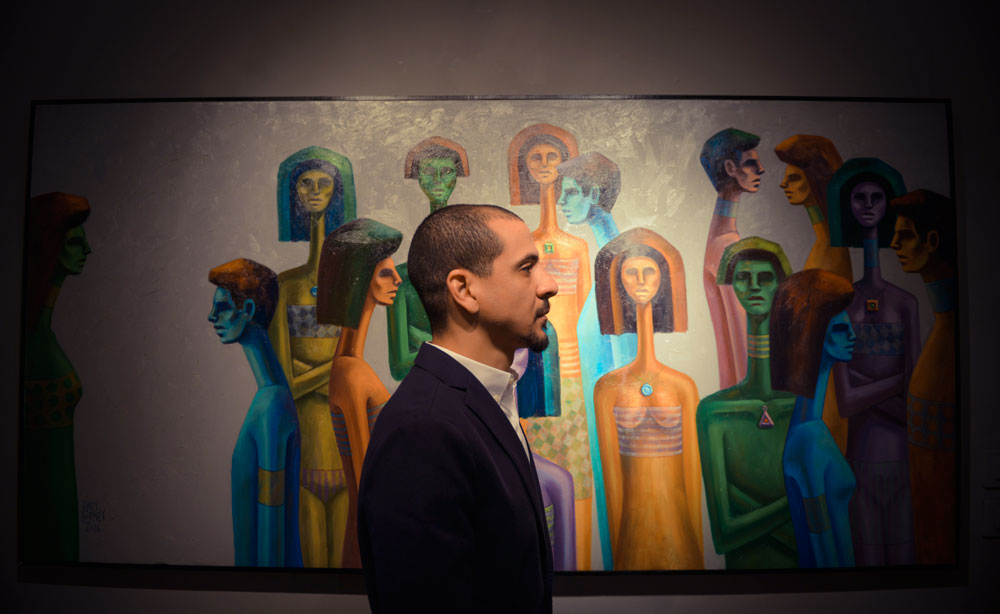 To know artist Hady Boraey is to be dumbfounded; the minute you start labelling and pinning things down like you have just had an epiphany is the minute you lose him. In his language, meanings are not assigned words but rather exist in a formless state, free of semantics. But words are my life, my bread and butter and the medium with which I vociferously protest and proclaim – without them, I am just a cowardly girl sitting on the sidelines, which I totally am in the physical world. Like me, Boraey has a crutch, except his is made of lines and shapes, patterns and colours, and nuances, motifs, and canvasses rather than words, analogies, and metaphors.

Walking around Art Talks Gallery with a perplexed look on my face, scrutinising the visually stunning paintings like some kind of existential detective, a waiter was kind enough to bring me an Absolut Vodka Cosmopolitan, which later proved to be a much-needed dose of emotional lubrication into Boraey’s realm, because, as Bobby Long quite eloquently put it, “take away the bottle, take away the genie!” His latest exhibition, Towards The [Un]Known, is a walk on the wild side of artistic expression, a hazardous crossing into an exotic and far away land. “Immigration is becoming this grail, everybody wants to leave, thinking anywhere is better than where they are,” Boraey says. “I used to think that people everywhere else were happy, it was incredibly naive of me, but then when I would go to these places, I would see that people everywhere had the same problems and that we are equally unhappy.”

In art, like in life, there is a pattern to the chaos; the capricious non-matter and the simmering passion that inhabit our bodies may work in mysterious ways, they may elude us, but Boraey chases them with the curiosity and eagerness of a child. “I think it is all about expression, the need to express something whatever it may be, which, to me, takes visual form,” he explains. “I was going through a very tough time personally when I was working on this project, so I think that this is where it came from.” He found salvation in someone else’s catharsis; “I was reading a lot of Arabic literature at the time, one that really stayed with me was Ziad Rahbani’s My Friend God in which he writes about the human struggle of feeling lost and finding oneself,” he recounts. “There is this part where he likens days to doors, so every day you open a door until one day there is no door to open and that’s when your life ends – visually, to me, this is about the search.”

In his search, Boraey found life in all its fullness, in all its promise and dismalness. “This is an extension to my previous exhibition, Beyond Borders,” he explains. “In my mind, I imagined that there are these people who reach the edge of the world – as if Earth is not round – so now they’re wondering how and when did we get here? And where did we come from?”

The search is never really over because, as with everything in life, satisfaction is never guaranteed; it is a promise that is never kept. We are like giant sequoia trees that grow higher than the eye can fully see, but we can never really touch the vertical limit of the universe – our heads may be in the clouds, but our roots are deeply entrenched in the soil, forever shackling us to a disappointing reality. So, quite naturally, the imaginary expedition ends on a most unfulfilling note – “after they get there, they come back, because they couldn’t find their memories there,” he says tragically. "That is why my subjects are depicted carrying things because we can never escape our memories, we carry them wherever we go. I didn't realise it when I drew it, but I do now." For a fleeting moment, I could hear J.S. Bach's Herr Jesu Christ playing in the back of my mind; uh-oh. I could see myself in the figures in his paintings; like them, I often stare longingly towards the unknown, glassy-eyed, ruminating about nothing and everything, or as my mother would often tell my psychiatrist, "she broods a lot." This is no convoluted artsy pseudo-intellectual talk, nor is it a feigned attempt at the tragedienne whose genius is her hamartia act – although, I do have an IQ of 175 points – this is the real deal. This, E.E. Cummings, is the root of the root and the bud of the bud and the sky of the sky of a tree called life.

The subjects in his paintings are everyone you have ever met or loved or crossed paths with. They are the huddling masses. They are you and me. Like them, we are trapped in a frame yearning for what we believe to be the unknown, an elusive mirage that we can never really catch no matter how fast or how long we run. The desire that once gratified is no longer desirable.

I sat before him, incredulous and dejected, then suddenly this strange sense of regret came over me – I regretted all those hours I had spent on my big-ticket psychiatrist's couch 'talking through it' – before I felt relieved because, at that point, it was water under the bridge and it was no use crying over spilled milk. I was finally comfortable with the abyss in the room. I gulped down the last of my drink and asked the bartender to fix me another one, because else what are you going to do?