A Taxi Worth Hailing

Ahead of the debut of their stage-adaptation of Khaled Al-Khamissi's hit novel, Taxi, Eihab Boraie meets new theatre company The Thousand Tongues, as they enter their final phases of rehearsals before their bi-lingual performances at Vent next week. 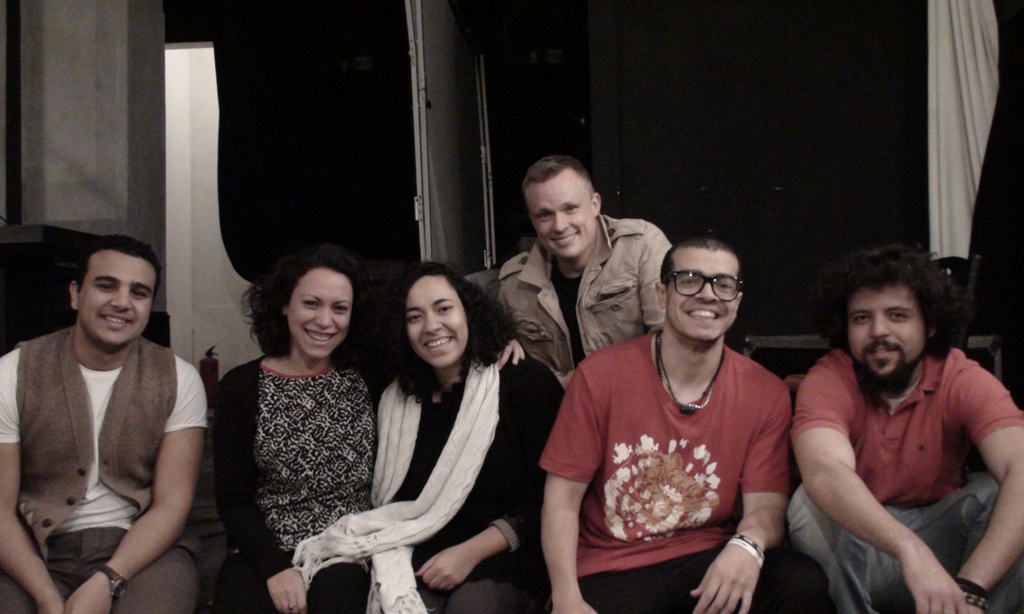 Despite all the ongoing turmoil that this country is going through there is one silver lining. In the midst of political uncertainty, an artistic renaissance is flourishing. Things that people were once afraid to talk about it are now being said in a variety of artistic mediums starting with graffiti on streets and finding its way into theatres across the country.

Case in point is Cairo’s newest theatre company The Thousand Tongues, a bilingual collective that aims to perform edgy Egyptian plays in both Arabic and English, to reach as wide an audience as possible. The first project they’re debuting is an adaptation of Khaled Al-Khamissi's Taxi, a patchwork novel comprised of 58 short dialogues with Cairene taxi drivers, shortly before the revolution.

The novel was adapted for stage in a collaborated effort between directors Brian Farish and Rewan El-Ghaba. Brian Farish has worked in theatres all over the world, and is dead set on leaving his mark in Egypt by founding The Thousand Tongues with the aim of establishing a platform that brings together Egypt's best and brightest actors and playwrights, while challenging the rules of theatre.With the performance of Taxi, Farish hopes to provide a unique experience to Egyptians by presenting the novel in an “installation-style performance party,” that promises to be interactive and engaging.

The theatrical experience will be unlike any other, as the novel's most memorable characters will be staged throughout the unorthodox space that their chosen venue, Vent, offers. The audience moves freely around the space, choosing which scenes to tune into, interacting with the performers, becoming a part of the story and, ultimately, reliving the drama of a pre-revolutionary Egypt. Speaking of which, cast member Hend El Shimy, recalls to us the difficulties of artistic expression in Mubarak’s era: “I worked with a theatre company for six years previously, and we had troubles doing anything. We had take things out [of our performances] and sometimes we couldn’t even find a place to perform.” Her co-star Ahmed Achrafi, also felt an artistic sense of relief since the January 25th revolution, adding that “the revolution made a very big difference. People wanted to say a lot, and in different ways. One of these ways is theatre.”

It’s good to hear that censorship is no longer an issue for these young actors, and even better to hear that the artistically-inclined now have more venues in which to showcase their work. The production of Taxi guarantees to be four nights of unique theatre that should not be missed. Attending the rehearsal, it was very clear that this project has been a labour of love, and that all involved recognise how important and unique this adaptation is for the times. “Taxi has a very wide audience and people are incredibly thrilled to see an adaptation of it, and I am just hoping that we live up to the integrity that the novel already has,” explains Farish.

Although the company is still taking care of the finishing touches on Taxi, momentum keeps building and there are already future plans to develop a couple of other creative projects in the near future. "We have the next few years planned out; first we plan on touring Taxi outside of Egypt, then the next project will be stage a performance piece by Mohamed Mahmoud Mostafa about his work as an attorney in Cairo," explains Farish.

Taxi will be premièring in Arabic on January 22nd and 26th in Arabic, and will be performed in English on January 27th and 29th at 8pm at the new Downtown Cairo arts venue, Vent. For further information, check out their Facebook event, and if you are already sold, then secure your tickets, now on sale at Vent for 50LE, or email tickets@thethousandtongues.com.