A Walk Through Kilometer 375

The only Egyptian film to make it to Cannes this year, Timmy Mowafi talks to up-and-coming director Omar El Zohairy about his haunting short movie and what it says about Egypt today... 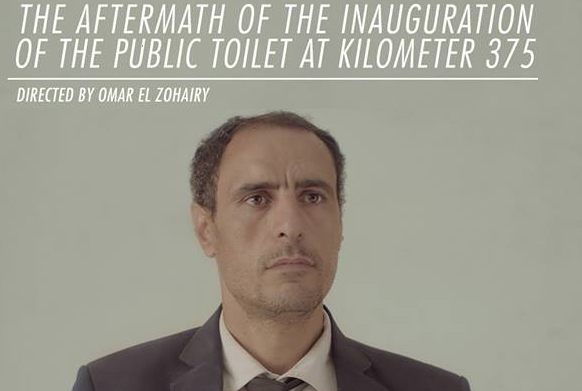 I never feel more anxious than when sitting, or waiting in a government building in Egypt. I thought this apprehension was a reflection of feeling trapped in paperwork processes which are, by all means, utterly absurd. But the problem runs deeper; it's more intangible. The anxiety is a manifestation of excess empathy towards those that work in these beehives of bureaucracy. It’s their feelings that are making me uncomfortable, and less my own. Feelings which are exemplified and amplified through the miserable protagonist of Omar El Zohairy’s short black comedy The Aftermath of the Inauguration of the Public Toilet at Kilometer 375. The film, which owns quite possibly the greatest name of any film I’ve seen, was the first Egyptian entry ever accepted into Cannes Cinefondation selection, out of 1,631 submissions this year. The film is based on Anton Chekhov’s 1883 short story The Death of a Government Clerk, where, like in this film, a simple sneeze spirals the main character into a series of events driven by fear. “I am obsessed with how you can find a link between different eras. As I see it, we live the same life with different interruptions,” El Zohairy explains on the inspiration for his short film. “I found in the short story, a very smart simple story line, a raw craft for a perfect short to the point film about a man who died because he is afraid.”

The story follows a governmental worker, who sneezes during a speech at the opening of a public toilet in the middle of the desert, setting the tone for the ominous hilarity of the government’s delusions of grandeur that re-occurs again during a press conference as a foreign minister describes the toilet inauguration as “a leap towards a brighter future.” The government worker, wrought with fear from his actions, continues to try to approach the head government official to apologise for the sneeze, only infuriating him further, until he eventually collapses at the end of the film. The film strikes a chord with today’s general zeitgeist in Egypt; “I think that feeling of nothingness in the film; you know a film with no feelings except fear and tension. That is Egypt. No one is here, we are like zombies,” El Zohairy says.

That sensation of emptiness, an uncomfortable and concentrated one, is partly accredited to the Kafka-esque director’s melancholic choice of colouring, as well as the locations; baron Soviet-style buildings make up the mise en scene, depicting a ghost town which further intensifies the absurdity and anxiety of the government worker's woes. “It was an old factory in Helwan. The architecture in the film is part of the drama. Without those abstract modern Russian buildings you cannot find a connection to that emotionless world. The film is based on visual actions; you have to pay attention to every visual detail even if it is a piece of anything in the background.”

The film also highlights the regiment of globalisation through ambiguous moments and El Zohairy has an acute eye for subtle symbolism. In one scene a huge gold-fish swims about in a suffocating bowl and in another the protagonist and his wife sit eating fried chicken. “Fried chicken is the global modern fast food; just fried chicken - you can eat without anything and you deal with it as a normal healthy meal!” In the penultimate scene, he approaches the head official whilst playing snooker in one of these abandoned buildings. “The snooker table is just a free-zone for that idiot important man. As you watched him all the film he’s very serious and you need something fun and absurd for him because the scene is built on this idea that the employee went to him during his private personal life,“ El Zohairy adds.

El Zohairy is currently working on a new project, and for someone who has reached the heights of Cannes with what was essentially a student project - one that has been recieving rave reviews - we can’t wait to see what’s next.

Watch a clip from ‘The Aftermath of the Inauguration of the Public Toilet at Kilometer 375’ here.