Amina Kaddous' latest project 'Inside Out' brings her face to face with Egyptians' self-inflicted censorship. In countries like Egypt, where freedom of expression is limited, it’s usually the government that cracks down on controversial persons or projects. This wasn't the case here. 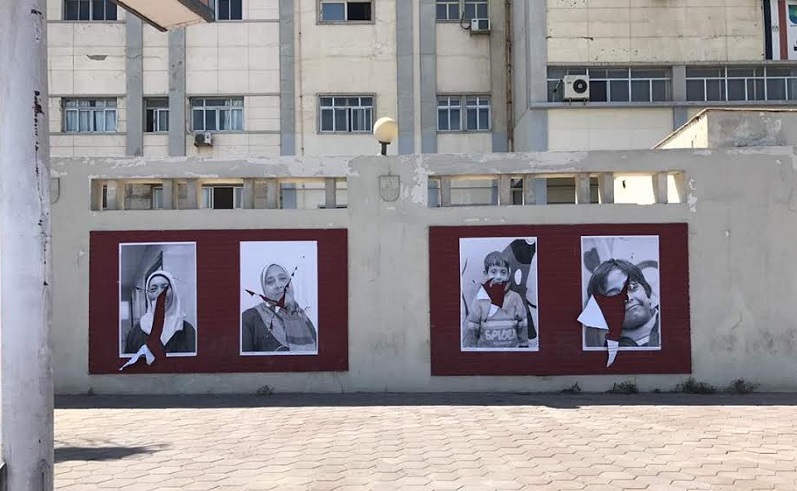 Amina Kaddous is a visual artist, and a graduate of the School of the Museum of Fine Arts in Boston, whose work is mostly inspired by Egypt and Egyptian society, and whose passion spans a deep interest in everything from the social structure and how it deals with community issues and matters of freedom of expression.

While working on her project in Alexandria, which involved using her artistic skills to bring help to an impoverished children's hospital, Kaddous found herself facing head-on the age-old Egyptian dilemma of restricted freedom of expression. But she faced it in a most shocking form, because it wasn’t some higher-up authority that interfered with and obstructed her good intentions; it was persons within the hospital’s community itself who brought the effort to an end when they realised that the project might actually stir up some turbulence as to bring the authorities’ attention in their direction.

A few years ago, Kaddous watched a Ted Talk by French graffiti artist JR, where he discussed Inside Out; a global art project, which would go on to win the TedX Prize.

“The project basically entails JR going out into the world, introducing and exposing the inside of communities to the outside world around them, by creating giant-sized photo posters of the people involved in these communities, or other relevant images, and sticking them on the walls of their establishments, or other walls nearby," Kaddous explains. "The idea is to turn the world into an open art gallery, eliminating the clichés and restrictions of regular white-walled galleries, and giving voice and presence to these otherwise unheard and unseen persons. The intention is to generate social change by enticing onlookers to inquire about the people in these photos and to find out about the issues they are facing, and then hopefully offer some kind of help.” The following example nicely illustrates the power of this project and its capacity for actually creating change. A few years ago in Zurich, there used to be a law that prohibited the building of minarets in mosques. JR went out and created a round of Inside Out posters showing mosque minarets and placed them on the walls of different buildings in the city. The images caused quite the commotion and, a short while later, an amended law was passed that allowed for the construction of minarets in Zurich.

Upon watching that talk and hearing about Inside Out, Kaddous felt a strong resonance with the idea and decided that she would one day team up with JR to bring Inside Out to Egypt, where she felt so many voices go unheard and so many communities are underprivileged and can use a little help. It wasn’t long before that collaboration manifested.

“A few months ago, I reached out to my friend Sherouk Ayoub who volunteers for a lot of CSR projects, and who I knew was involved in generating awareness and raising funds for Abul Rish hospital in Alexandria. I introduced her to the concept of Inside Out and suggested we connect with JR to help shed light on the hospital’s community and their dire need for medicine, supplies, and other necessities, the absence of which was devastating to the patients. In many cases resulting in untimely deaths, and the attainability of which was not a difficult thing, but only a matter of raising enough awareness to bring about funds and/or the required supplies,” Kaddous elaborates.

Ayoub said she was on board, but suggested they move their efforts to El Shatby paediatric hospital because Abul Rish had already received a lot of publicity the year before, while El Shatby was a governmental hospital and therefore severely underfunded and in need of the most help. I didn’t want the photos to be bleak and depressing, so instead of taking photos highlighting the children’s illness, we decided to capture them - as well as the doctors, nurses, the janitors even! - in a happier state

“So, we went ahead with it, I didn’t want the photos to be bleak and depressing, so instead of taking photos highlighting the children’s illness, we decided to capture them - as well as the doctors, nurses, the janitors even! - in a happier state. In a way that would remind the viewer of the joys of a childhood that is healthy, emphasising the urgent need for the hospital’s requirements. We had a great time putting these portraits together, but what blew me away the most was how fast we got a response from JR. We submitted the photos, and within a week we had gotten our approval, and a couple of weeks after that, we received fifty amazing posters!” Kaddous went on.

A short while after that, Kaddous, Ayoub, and members of the hospital's community got together and held an event where they put up the posters around the establishment's walls.

Because El Shatby is a government hospital, it was an almost impossible task to be able to gather all the required documents and signatures that would legally allow for the posters to go up. With a bit of persistence they managed to do that, as well as acquire written consent from the persons who had agreed to be photographed, and the result, according to Kaddous, was that the hospital lit up and looked like a beautiful work of art. All in all, it seemed like the entire endeavour was a blazing success. All that remained was waiting to see the anticipated impact of the posters.

But, alas, that would not be how the story unfolds because in less than twenty-four hours, not the officials, not the police, not the government, but the members of the hospital's community who had previously consented to be photographed took down the posters. They were not there on the day the posters went up – a mistake Kaddous vows never to make again – and when they saw their own massive faces up on those walls they panicked. “They tore them to shreds, every last one of them!” Kaddous recounts with a hint of sadness in her voice. “This whole project was aimed at addressing a particular social issue – the hospital’s needs – but what we were faced with, and certainly didn’t prepare for, was another issue entirely: fear. Fear of being seen. Fear of being heard. Fear of expression. Fear of being exposed. They were fine with the whole thing, and even signed their agreements, until they realised how big it was. They didn’t want their faces seen on such big posters. They didn’t want to stir that big of a commotion.” Kaddous wraps up her story in an encouraging tone, though, saying that in the future she will continue getting involved in this kind of work, and that although the idea of freedom of expression is scary for a lot of Egyptians, and we’ve been used to hiding and keeping our voices to ourselves and surrendering to the idea that this is Egypt and that’s how things are here, she still has a lot of hope. “Change starts with one individual, and persistence is key,” she concludes. “If we keep going out there and talking to people, creating campaigns, creating awareness, teaching and educating them about art and social change and showing them how to express their feelings, I really believe change can and will happen.”