Meet the Egyptian Artist Stripping Oppression of its Power Through Collages 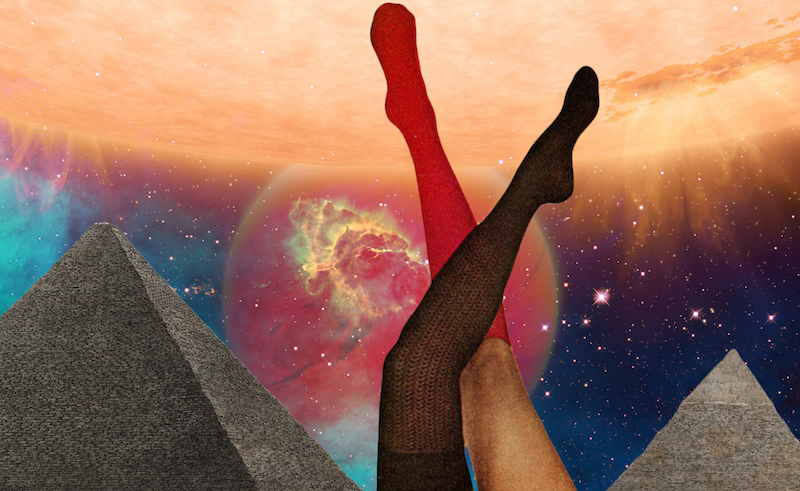 A generation of thinkers, millennials are constantly questioning the standardized norms of their forefathers. We're believers in unveiling a concealed truths and fighting for what’s right. Beya Khalifa is the artist exploring the world around her and sticking it to the man by reconceptualizing otherwise oppressive objects into a context that strips them of their derogatory powers. She uses the condescending illustrations as a tool of rebellion. In layman terms, she’s fighting back using those same tools that oppress us to free us in her collages of surrealism.

Baheya who originally started off painting, shifted to collages a few years back and found herself in the art form. Exploring themes of orientalism, colonialism and sexism, the talented Khalifa explores varying concepts of exploitation by superimposing objects from the past into different backdrops. The artist makes statements that transcend any time period in the combinations of her collages.

"My work can be very starkly juxtaposed. My collages reveal something of a fractured identity, we often struggle with in a post-colonialist or a post-imperialist world.” says Khalifa of the contrasting nature of the subjects appearing in her work.

"It's about orientalism at it's peak" says Khalifa of the above collage. "The woman who is clearly western - with a very typical western American dream sort of vibe - is portrayed holding her lawnmower and mowing one of the oldest civilizations' monuments. It's how the West has destroyed our culture and how it's continuing the destruction that sees an increasingly westernized youth. It's the modern day clash of cultures."

Finding her elements in vintage resources, postcards, old advertisements, magazines and international archives, Khalifa tackles orientalism at the source. Digging up some archives from the New York digital library, Khalifa notices the generic names given to a series of photos portraying Arabs which perpetrates the idea of orientalist views.

"So I found this in a photo series of bedouins entitled bedouin, bedouin bust, bedouin woman. And by the end of the series there was a picture of the photographer and his friends - who are western - and it was entitled young gentlemen in suits” exclaims an enraged Khalifa of the above collage. “ It was just frustrating how the Arabs in the photos were reduced to a sort of caricature who aren’t even worth the time of coming up with a proper name. You’ve seen one bedouin, you’ve seen them all sort of thing. Having not even taken the time to research the Arab garb as opposed to their western suit. I wanted this photo and I painted most of the face only keeping the eyes because the eyes are the window to the soul. I was trying to give him back his identity."

Entitled fuck your oppression, Khalifa attempts to emphasize the west's outlook on Egyptian culture. "These people come and marvel at our architecture yet have this Arab archetype who is barbaric and ignorant," says Khalifa of the collage.

Khalifa doesn't limit herself to colonial and orientalist issues though, she tackles notions of sexism by using caricatured images of women from advertisements in the 50s and 60s wherein women were portrayed comically in that their sole purpose in breathing was to wait on their husbands and keep the house clean, after which they could die happy. She takes women from these derogatory ads and places them at the top of the hierarchy.

“I took a woman vacuuming in this collage and placed her cleaning up the road and she’s bigger in size. This is because women don't just clean the house. They're cleaning up the world and can rule it if that's what they want. And their roles aren’t limited to cleaning your kitchen. I flipped the concept using the same main subject, ” says Khalifa of the collage.

Originally an advertising and PR major, Khalifa left the advertising world behind but not without subtly weaving its shortcomings into her artwork. The young artist takes tools imbued with negative connotations and places them into backdrops that readfine the nature of their power.

“I got her from a towel ad. To me, her disregarding a towel in a public space is a statement and an act of defiance. She’s confident,” says Khalifa of the piece.

"Advertisements were very consumption oriented." says the artist of this collage. " We live in a very capitalist society. And for some reason all the ads from the 50s and 60s showed people caressing their objects, be it the phone or the pillow or the vacuum. And it came off as us putting so much emotional value into objects and their consumption. So I took the woman and superimposed her on something of actual value: nature, the mountain. This is my way of fighting capitalism."

A multifaceted artist and thinker, some of her collages tackle more existential topics that plague us all. " I explore love in all of its notions and perceptions.You have this girl who is hugging someone but there’s no one there. Can love be contained into a single person? Or is it supposed to be something bigger?" says Khalifa of the main subject of the collage.

Exploring perceptions of love within society, Khalifa gains insight from the world around her and transcribes it onto the canvas. The artist urges us to contemplate questions of our own experience from masochist relationships, to functional ones to the happy ever afters.

“I find inspiration in anomalies, in things that don’t really fit together but end up making sense in the most jarring way. It feels like that’s basically what the world is - life imitates art, doesn't it.”

Windmills and Headspins: The Lack of a Real Breakdancing Scene in Cairo

There are definitely signs of blossoming, but the scene as a whole still hasn’t [...]