What's the deal with this cartoon that's most likely come up across all your feeds lately? It's an original Omar Hazem. 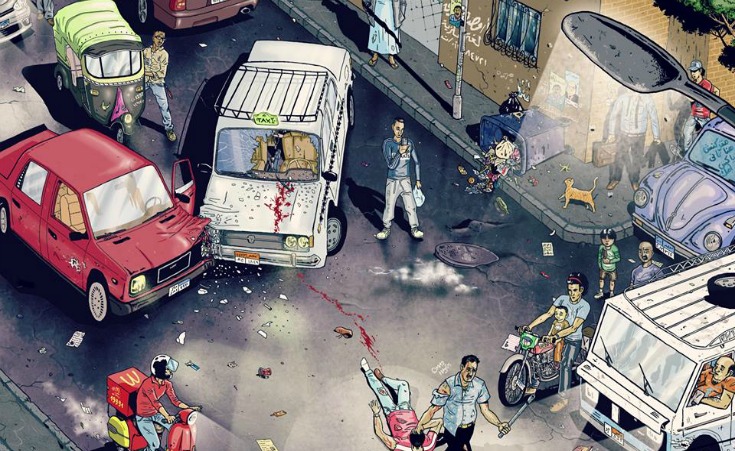 Walking in the streets of Cairo (at any time, really), you are bound to be bombarded with all kinds of stimuli. The constant honking, the crazy driving, the occasional yelling and greeting, and the bad streets are only some of the things you need to watch out for while walking down the street. However, our humble description aside, illustrator Omar Hazem depicts the reality of walking Egypt's streets through his cartoon, rightfully captioned ‘you are in a forest’.

The caricatured drawing shows many faces of everyday Egypt, most of which aren’t awesome. For instance, you can see the taxi driver dragging a man he had just beaten up after their cars collided. The garbage can with its spilled contents on the street, the famous McDonald’s delivery man, the tuktuk stopping to watch alongside other dwellers of the area and a man with his little boy on the scooter. You can also spot a young man taking a picture of the taxi driver with his phone, a beggar on the sidewalk, and clothes hanging on a balcony rope.

The details of the drawing evoke a perhaps not so pleasant image of Cairo’s street, but the candidness and accuracy of the detail must have been the real reason why the sketch has gone viral recently. Another artistic creation found on Hazem's personal Facebook profile, seen above, capture's the different perceptions people have of this beautiful yet overlooked city. Captioned 'it only looks beautiful when it's time to leave', this image highlights the beauty of Egypt that people see as they depart – almost a third person perspective – in direct contrast with the run-down buildings and kiosks that overshadow the beauty for most locals, who opt to look down at their phones. 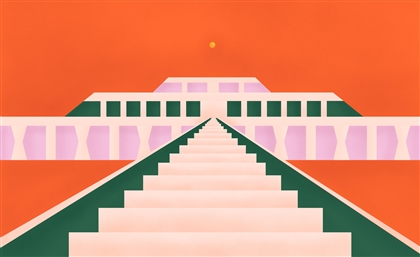 Fall in a Trance With These Abstract Artworks of Egyptian Monuments

While on a trip to Egypt, Ukrainian designer Katerina Bielobrova, was captivated by [...]
Week Month Year