As cutting season - the time of the year when the weather is optimal for female genital mutilation - approaches, renowned Egyptian contemporary artist Reda Abdel Rahman condemns us all to a spring of horror with gory depiction of FGM. 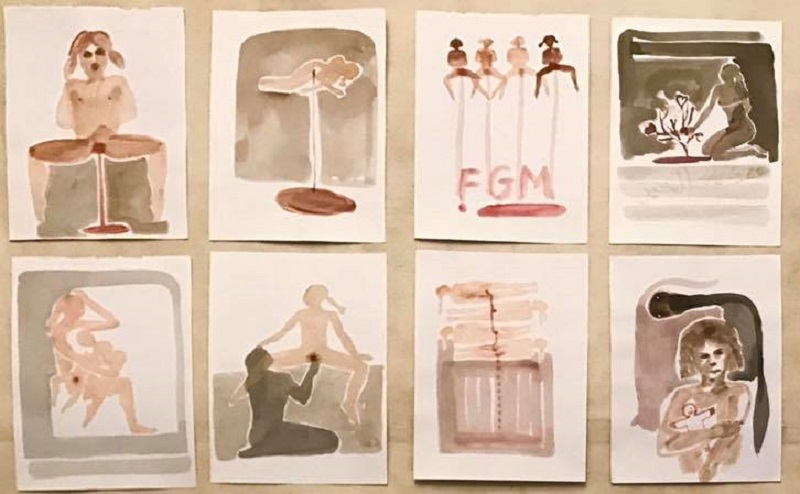 Those of you who know contemporary artist Reda Abdel Rahman and are familiar with his work know that art is his picket sign. Throughout his prolific career, Abdel Rahman infused his brushstrokes with his beliefs; which to some were always interpreted as political statements.

A resident curator at the internationally-acclaimed CARAVAN Exhibition of Art – which takes place every year and aims to bridge the cultural and religious gaps between East and West by bringing together the finest contemporary artists from around the world to address universal values like peace, compassion, and coexistence in their work, Abdel Rahman has been making statements his whole life and none of them are the wishy-washy, Hallmark-card type.

In 2015, he ruffled one too many feathers with a donkey. As part of his exhibition The Donkey – a recurring motif in his work, Abdel Rahman captured the essence of the Egyptian character; smart yet gullible, downtrodden yet forbearing, senselessly cruel at times yet kind. In some of the paintings, Abdel Rahman raised the stakes even higher when he summed up the Muslim Brotherhood’s rule in a stunning visual depiction of the mistreatment of women under the Islamist group’s ideology, exploring themes like female subjugation. Never one to hide under vague and ambiguous symbols open for the onlooker’s interpretation, Abdel Rahman’s modus operandi, especially when it comes to women’s issues, has been head-on collision since his debut in 1985. And although he resides in the Big Apple now, he remains true to these very values and steadfast in his commitment to women’s issues in Egypt.

“I have presented so many works addressing women’s issues in the Middle East and North Africa, criticising the injustices that befall them, like child marriage and unequal distribution of inheritance among other issues,” Abdel Rahman says. “As a man, as a father, as a brother, as a son, I reject anything that disrespects women or undermines their abilities”.

Last month, the artist put the barbaric practice of female genital mutilation (FGM) – which according to a 2005 survey, occurs to 95% of Egyptian women – on blast in an artwork displayed at Darb 1718. The piece consists of collated paintings that all depict girls with bleeding genitalia. In others, he brings back the donkey as the average Egyptian man, foolishly thinking he is following the ‘word of God’ by ‘cutting’ little girls. When asked about the gory nature of his paintings, Abdel Rahman made no apologies. “Because the subject matter is gory, FGM is beyond savagery,” he exclaims. “How many women have had to live with the psychological aftermath? Many of whom have failed marriages, suffer from frigidity, divorce, etc”.

To him, it is more personal than figures and statistics. “It particularly hit me when I had daughters, and then knew that many of their peers fall prey to this crime by people who think it’s a religious ritual.”

As spring blooms across the meadows and fields in Upper Egypt, 'cutting season' – the time of the year when weather conditions are deemed optimal for the procedure – looms in alongside it. Reda Abdel Rahman has just brought to life a visceral depiction of this horrific act that is done to millions of Egyptian girls every year. The artist just made it impossible to un-see this horror, he has just condemned us all to a spring of horror, even if the 'mutilation' is taking place miles and miles away from us. Perhaps then, he must have thought, we will speak up even louder.