A brilliant short documentary by and about skateboarders in Egypt was recently picked up by the legendary Tony Hawk's online skating channel. We talk to budding filmmaker, Muhammed Ibrahim - just 18-years old - about his triumph of a film... 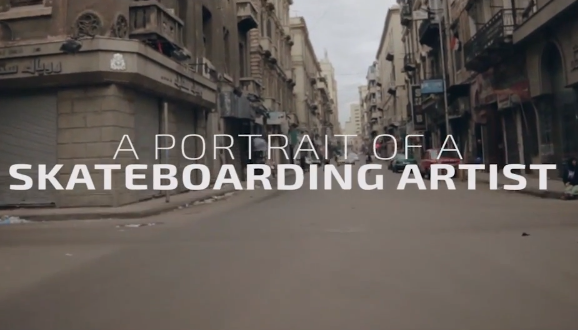 "Living in egypt is one of the greatest things that can happen to you if you're an artist, because it fuels you with anger and to be an artist you need anger to get creative... and Egypt has a lot of Anger."

A new film by Skateimpact's young resident filmmaker, Muhammed Ibrahim, 18, follows Egyptian artist and sponsored skater Ziad Ashraf, 21, through his average day, skating around Alexandrian streets, working on his surreal illustrations and battling the constant prejudice and cultural oppression that clouds over those who move against the grain.

The eight-minute short is a cinematic beauty, with melancholic colours and lights glimmering through the protagonist's journey, accompanied by a perfectly ominous yet uplifting score. The rhetoric eludes to the explosion of art and rebelliousness since the revolution but thankfully avoids talking about it in the banal way, overdone by pretty much every Egyptian director today. Instead, A Portrait of a Skateboarding Artist concentrates on the simple act of being and how typical perceptions make it hard to be and to create in Egypt.

"I wanted everyone to experience what, we, skateboarders, experience on a daily basis," Ibrahim told us. "I had this idea about making a feature-length documentary about what all the underground artists face in Egypt but I didn't have enough budget to continue. So instead of wasting time I decided to make a series of short documentaries about some of the underground artists here. I'm pretty sure I will start working on the feature documentary, as soon as I have the sufficient funding."

Having watched this profile on Ziad Ashraf, it's clear Ibrahim has a sincere and creative eye for documentary film-making and we're definitely looking forward to what's to come.

The documentary was actually picked up by Tony Hawk's own online skating channel, RIDE, and you can see it in full above.