From A to B Finds Success

Aly Mostafa's latest film has been piquing interest at both Abu Dhabi and Cairo's annual film festivals. Before its debut at Dubai International Film Festival next month, we catch up with co-scriptwriter Ashraf Hamdi to find out more... 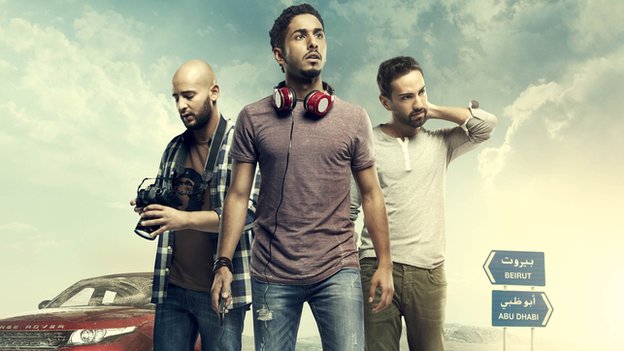 There is a lot of buzz surrounding Aly Mostafa’s film From A to B, after successfully debuting at this year’s Abu Dhabi Film Festival, and receiving further acclaims this week at the Cairo International Film Festival. Hoping to learn about this epic Middle Eastern road trip, we talk to co-screenwriter Ashraf Hamdi, who shares with us his insight on this film that believes ‘to find yourself, you need to get a little lost.’

From Kerouac’s brilliant novel On The Road to the hilarious Hangover franchise, the story of an epic road trip continues to be rehashed through both literature and film. The latest film taking a road trip is From A to B, the story of four friends who met in Abu Dhabi and have always talked about taking a road trip together. When tragically one of the friends dies in Beirut, the other three decide to fulfill their promise and set off from Abu Dhabi to Beirut to visit their friend’s grave on his birthday. “Aly Mostafa approached me to write the script, and I spent three weeks working on the first draft,” explains Hamdi. Originally From A to B was supposed to be an English feature but a last minute decision to switch the script to Arabic. "

The Arab take on the traditional road trip walks a fine line between being a comedy and a drama while highlighting the strengthening of friendships along the way. Although the obstacles they face tend to be hilarious, it is when they reach Syria that the film takes a serious turn into drama. “Produced by imageNation and 2454, the film was supposed to originally be 90% English and 10% Arabic, but the producer decided to switch it before shooting and is now 90% Arabic and 10% in English," describes Hamdi about the shift. This resulted in an obvious rewrite of the original script, and joining Hamdi as contributing script writers is funny man Ronnie Khalil and cult film favourite Mohamed Hefzy.

The film debuted at the opening of 2014 Abu Dhabi Film Festival and received plenty of praise and an IMDB rating of 7.2 and was just screened at the Cairo International Film Festival this past Saturday. According to Hamdi “Egyptian audiences are the hardest to please, but during the movie everyone was laughing at all the right jokes, and left with very positive reviews. The only complaint I heard was that the Syria part was too serious.” Despite the criticism From A to B seems to be on a right path to make an impact.

The film can be seen next month at Dubai Film Festival, and is eyeing a widespread Middle East release in January. Of course there is still no word quite yet if Egypt will be showing the films in its own theatres come January, however considering the increasing lists of accolades From A to B could quite possibly be the most refreshing Middle Eastern film this winter.