From Hollywood to Gaza: Celebs Split Over War

As the bombs continue to drop over Gaza, celebrities have taken to Twitter in their own war, with more and more stars showing support for Palestinians, while others have countered with vitriolic tirades in support of the IDF's actions. 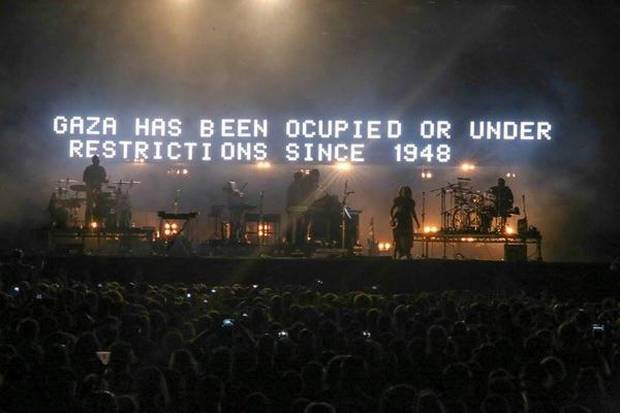 As the battle in Gaza rages on, some of music's biggest superstars are taking their own political battle to the dance floors and stages of the world.

Many of the world's biggest stage and screen stars are drawing their own battle lines, in an effort to win hearts and minds in the Israel-Palestine conflict.

Last week 90s electronica legends Massive Attack took to the stage at the internationally acclaimed Longitude festival in Dublin, for a show that, at the outset, looked like any other.

However halfway through the set - the 90s music legends illuminated the stage with a giant LED which read, "Palestine has been occupied or under restrictions since 1948."

In 2010 Massive Attack’s lead singer, Robert Del Naja, told the New Statesmen that musicians have an important part to play in shaping public opinion on the matter.

During the interview he spoke of his backing for the cultural boycott of Israel, as it “applies the continual pressure that’s needed.”

He said, “The boycott is not an action of aggression towards the Israeli people. It's towards the government and its policies. Everyone needs to be reminded of this because it's very easy to be accused of being anti-semitic, and that's not what this is about.”

Massive Attack are not the only group wading into the ongoing conflict between the Israeli State and the Palestinian people.

Barbadian songstress Rihanna sparked outrage when she included the #FreePalestine hashtag on one of her tweets. The reaction from fans was so divided that the 26-year-old was forced to delete the offending tweet just moments later.

However, as the war rages on, moods are changing among the Twitter generation. Today's teens and 20-somethings - previously notorious for their apathetic attitude towards politics and civilian strife - are now taking to the streets in unprecedented numbers to stand in solidarity with the women and children of Palestine.

Jewish TV funnyman Jon Stewart has set tongues wagging stateside, after ditching the usual US TV pro-Zionist narrative, instead focusing on the everyday realities of war for the besieged Palestinian people.

Moreover, Pink Floyd front man Roger Waters has also long been a strong supporter of the Palestinian cause - particularly the BDS(Boycott, Divestment and Sanctions) movement, which aims to end what many see as Israeli apartheid, in a move similar to that carried out against South Africa during the 90s.

Meanwhile, folk crooner Leonard Cohen took a unique approach to the Israeli-Palestinian problem. Despite months of pressure from activists in 2009, Jewish-Canadian Cohen refused to cancel planned shows in the Zionist state. Instead the 'Hallelujah' singer chose to donate the profits raised from the Tel Aviv shows to Palestinian children's charities.

However, not all stars are so keen to support the Palestinian cause - with some even bizarrely expressing their pro-Israeli views as IDF bombs destroy civilian homes.

The Black Eyed Peas praised the Zionist state during a Tel Aviv performance in 2006 - the same year Israeli troops kill more than 1,000 in the brutal Lebanese war. "We've been here for five days," vocalist-rapper Will.I.Am called to the crowd, "and that's been the best five days of our lives."

"Check this out," he went on, ticking off the ways he found himself loving the country, from the landscape, to the tight-knit character of family life, to the "most beautifullest" women on the planet.

"Y'see, I brought my mom and my grandma. You know, we're Christian, but I think I'm gonna convert to Judaism..." the rapper continued.

US comedy washout Joan Rivers also got in on the act as the death toll mounted. In a scathing rant, she told US-gossip website TMZ, "If new Jersey was firing rockets into New York we'd wipe them out."

When asked about the civilian casualty rate she said, "I don't care, they started it."

Meanwhile washed-up shock jock Howard Stern also aired his rabid pro-Israel views during a five minute foul-mouthed tirade. He told listeners, "Jews are the indigenous people of that area. I’m sick of the bulls**t. And the Arabs don’t even want those Palestinians, otherwise they’d let them matriculate into their country."

One-hit-wonder US star Kid Rock has also previously expressed his support for the Zionist state as part of a foul-mouthed tirade.

When asked about his support for Israel he said, "They just fucking got 50-caliber fucking guns in Israel. They don't give a fuck. They'll unload on anybody. 'Fuck with us? We'll fuck you up.' That's my motto in life. 'Be nice to everybody, but if somebody fucks with you, FUUUUCK them up.' We're fucking saving your country basically."

Nevertheless, as the fighting continues, it seems that so too will the battle for the minds of the world's music fans.

Every day it seems that one famous face or another is offering their two cents on the conflict, which has so far seen more than 1,000 Palestinians killed.

It remains to be seen how many more celebrities, how many more tweets and how much longer it will take before the world wakes up to the injustice perpetrated by the Zionist state, and at last call for an end to Israeli apartheid.