Ganzeer's U2 Video is A Must Watch for Egyptian Artists

Just when you thought Egyptians had done it all comes an impressive stop-motion music video commissioned by the Irish rockers, created by one of Egypt's most influential yet infamous artists... 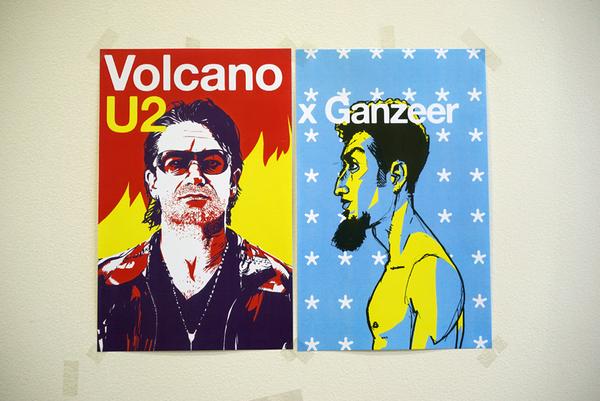 Egypt's uprising may not have ushered the changes the masses were looking for, however it did spark a successful arts revolution that has brought Egyptian artists to an international platform. Leading the way is none other than visual artist, labelled a terrorist by the state, Ganzeer, who has the music industry buzzing with a video he made for Irish rockavists U2.

There are those who love U2, and those who absolutely loathe U2, however in attempt to be relevant again, U2 have decided to accompany their latest album, Songs of Innocence, with a collection of short films by 11 artists from all around the world. The inspiration for the project was motivated by political murals seen around Northern Ireland.

For the track Volcano, U2 enlisted the help of Ganzeer, who created an amazing stop motion film for the project. Amassing 862 different posters, the video comes off as an impressive accomplishment especially with the time allotted. "I was only given three weeks to work on the thing from start to finish," Ganzeer said in a statement. "An impossible number of posters to design in three weeks, let alone print, and film, frame-by-frame, stop-motion style, and then finally edit into a video synced to the song. So my approach mainly differed in having to deprive myself of sleep and shower much less. That sorta thing!"

Describing the inspiration for the film Ganzeer writes:

"Before the advent of the music video, our only visual representation for a song, band, or album was pretty much whatever existed in print, primarily gig posters and record sleeves. I figured it might be interesting to bring that back into the music video world, by creating a stop-motion film using nothing but posters. Especially given that Songs of Innocence is supposed to be directly inspired by '70s era punk, a time when the gig poster was pretty much the visual representation of punk and rock'n'roll."