The video shows an army of volunteers, led by 18-year-old Amina Badawi, who joined forces to lighten up the room of one of Egypt's most emblematic children hospitals. 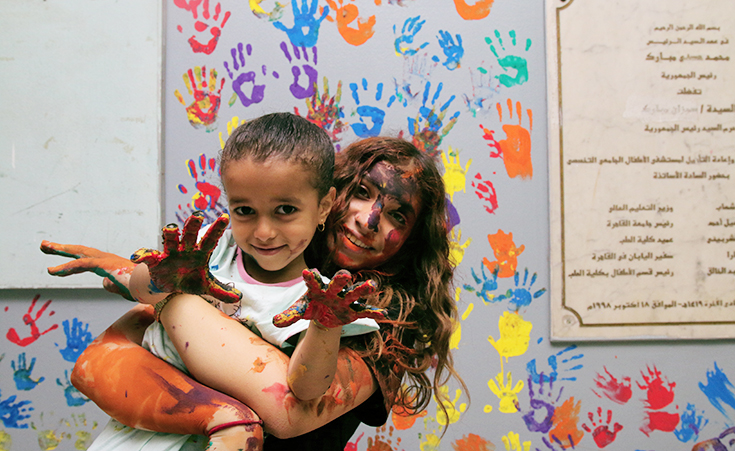 It was a hot Ramadan day when high-school student Amina Badawi set off to fill Abu El Reesh’s dimly-lit walls with vibrant cartoons. Together with 50 other students she gathered by word of mouth, she sparked a ‘colour revolution’ that entirely transformed four rooms at one of Cairo’s emblematic hospitals for children.

The initiative, which silently took place last June 25th, came to light yesterday after the stunning visuals of young Egyptians transforming the hospital’s spaces into works of art began flooding our Facebook feeds. “The campaign revolves around many things I stand for as a human being, such as spreading happiness and helping people who are in need in nonconventional ways. After a week of hard work, we managed to transform the hospital into something else - a place where the children will feel comfortable and at home,” says Youssef Ramzi, the videographer who turned action into stunning visuals.

Badawi, a 18-year-old artist who was still in high school, came up with the idea when one of her relatives pointed out the dire conditions at the children’s hospital. “My relative had suggested I painted a waiting room to brighten it up for the children. After seeing the reactions of the children and parents, I wanted to do it again so I told a lot of people from school and friends to join me in Ramadan, since it is the month where charitable acts are most popular,” she says.

The Abu El Reesh hospital treats 900 patients per day and an estimated 25,000 every month, but most of them are treated on a bro bono basis, as the government contributes with only a fraction of the funds needed to meet the escalating demand, a CairoScene report revealed.

The young changemakers painted three waiting rooms with the themes under the sea, jungle, and local Egyptian cartoons, as well as the physiotherapy room, which was filled with famous cartoons exercising. “We also changed the ceiling of the scan room. Two of my friends who are very talented artists studying art in Europe, Malak Fahim and Mariam Rami, painted a realistic galaxy sky, to make the experience less stressful,” she tells CairoScene. “On the last day, we filled the main corridor with balloons and organised an interactive day where we put on music and helped the children fill the room with their hand prints, to make it their own.”

The young artist has just graduated from El Alsson High School and is now to go to university. “I will hopefully organise something similar next year, bigger and better. It doesn't have to be artistic if that will lead more people to participate; just seeing how many people were willing to do something and help once something was organised made me realise how much potential we have of making a difference,” she says.