Staff writer Farah Ibrahim looks back on the series to see just what went right when it comes to Egyptian representation - from the careful casting choices, to that big reveal in the finale. 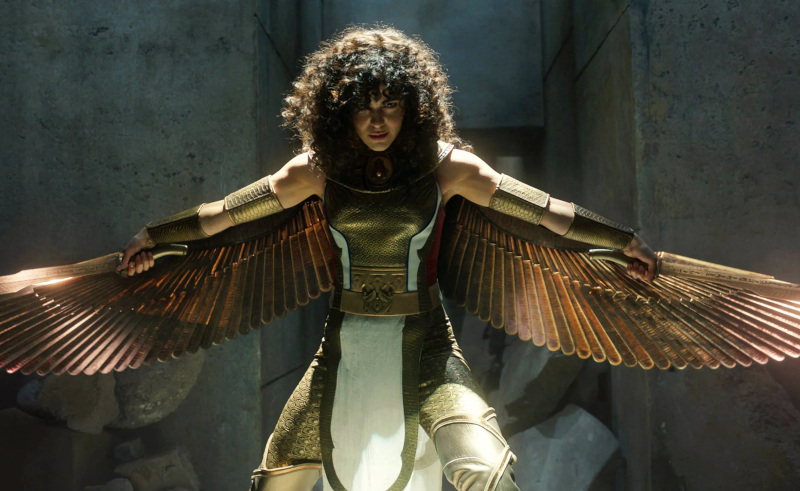 Egyptian history and culture run deep throughout Marvel’s new series, Moon Knight. While the show traffics in a great deal of ancient Egyptian deities and mythology, leading man Oscar Isaac’s character isn’t actually Egyptian. Isaac plays the titular role of Marc Spencer, an American mercenary who became the avatar of the Egyptian moon god, Khonshu. Even so, the anticipation leading up to the series’ premiere raised questions about how well Marvel would tackle accurate representation of the oft-exoticised land of the pharaohs.

Moon Knight joins a slew of recent Marvel projects, like ‘Shang Chi’ and ’Black Panther,' on the exploration of identities and themes that aren’t so commonplace in the earlier phases of the Marvel Cinematic Universe - which is to say, non-white, and non-American (even Thor, the cosmic god-being based on Norse mythology, just gets dropped on his butt in America during his first film!). But because of Egypt’s Arabic cultural identity, it was all too likely that the series would adopt the same orientalist tropes we’re used to seeing in Hollywood all the time. In other words, there was this anticipation that images of Egypt would be deliberately exoticised, exaggerated, or twisted in order to support Western conceptions of them - such as by using the infamous 'yellow filter’ in shots to suggest that these locales are ‘dirty’ or ‘uncivilised’.

While the show has its shortcomings — some viewers have criticised its pacing, while others have mocked a specific scene’s butchering of the Mandarin language— Egypt appears to be well-represented, thanks in part to the fact that it was directed by Egyptian filmmaker Mohamed Diab, the artist behind ‘El Gezira’ and ‘Clash’. As Marvel’s first Arab director, he sought to avoid the dehumanising angle that often plagues Western cinema, where the women are submissive, and the men are diabolical.

It was also Diab that pushed for Egyptian-Palestinian actress and ‘Ramy’ star May Calamawy to play Layla El-Faouly, a major character who wasn’t initially written as Egyptian. In the last episode of the series, ‘Gods and Monsters’, Calamawy’s character Layla El-Faouly assumed the role of Marvel’s first Egyptian superhero, the Scarlet Scarab, who came appropriately crowned in a mane of curly ringlets. In a tweet, Diab shared a side-by-side photo of Layla El-Faouly and his daughter’s curly hair, writing: “Since my daughter was 4, she wanted to straighten her hair. She never saw someone who looked like her in the media. Today this changes with LAYLA, the first Egyptian superhero. Proud to be a part of it!”

It wasn’t just Calamawy and Diab representing Egypt in the series. Both behind and in front of the camera, an array of Egyptian talent was present, as part of Diab’s mission for authenticity. The goal to attain authenticity led to the appointment of composer Hisham Nazih (the very same man behind the music in the Pharaohs' Golden Parade), editor Ahmed Hafez, and other Egyptian creatives such as costume designer Reem al-Adl and Ali Hossam. On the screen, Amr Al-Qadi, Zizi Dagher, Ahmed Dash, and Hazem Ehab were among the Egyptian actors who appeared and were heard in Moon Knight. “If you see someone who’s Egyptian in the show, they’re probably Egyptian!” Diab stated earlier, estimating that 90 percent of the Egyptian roles, even the extras, went to Egyptians. The authenticity of the casting extended beyond major roles, with Diab not just flying in several relatively well known Egyptian actors for smaller parts, but even the role of an Egyptian taxi driver who had just one line.

The same can be said for the music. When Ahmed Saad, 3enba, and Double Zuksh's Egyptian rap song ‘El-Melouk' appeared in the end credits of the second episode, for example, the reaction was overwhelmingly positive— the song even became a trending TikTok sound well outside of Egypt.

The show got very close to an accurate representation of the country, despite the fact that it wasn’t actually filmed within Egypt. Hollywood cameras haven’t rolled into the country for some time for bureaucratic reasons. Instead, much of the show was filmed in studios in Budapest where Diab and his family decamped for over a year, but he brought on board a number of Egyptian creatives to help achieve his vision. On the vast set in Budapest, two entire Egyptian housing blocks were built.

In the future, Diab hopes they can try to organise a premiere in Egypt as the first step to shooting the second season locally. Getting the permits to shoot might not seem easy at present, but Disney+ is due to launch in the Middle East in June, allowing Egyptians to watch Moon Knight and see how it’s being depicted on screen, and perhaps raise the hype that would be necessary to make it happen. Until then, we’re looking forward to seeing more of the Egypt that we know and love on screen.