Stefania Angarano dedicated the past 25 years of her life to turning the Mashrabia Gallery into the what is today. Staff writer Nour Kamel spoke to her as the gallery opens its Mashrabia Annex new space. 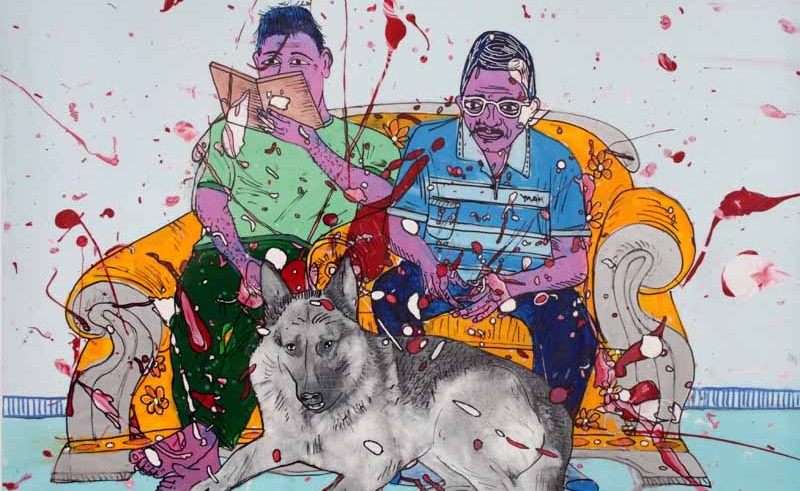 Downtown Cairo has always been the city’s cultural hotspot. From iconic landmarks to tech hubs, the city centre has it all. It’s especially popular for artists; painters routinely come to the hustle and bustle of the city centre to paint the scenes and photographers spend hours wandering around the streets try to take the perfect shot.

To most, the art scene in Downtown is about the outdoor scenery, but the people who know the city's historic centre best know the art scene is actually most vibrant and international in its nooks and old, dilapidated buildings.

The Mashrabia Art Gallery is one of Cairo’s oldest and has now slowly become one of its most important art spaces since its opening in the late 70s, but that hasn’t always been the case.

When the gallery had just opened its doors, it served as an exhibition hall for small time art students, most of whom never really made much of a splash in the art world, but a real difference came when director Stefania Angarano came into the picture in 1990. The Italian director changed the gallery from just another hole in the wall, to the leading exhibition space that it is today. Her goal was to bring the international art scene to Egypt and the Egyptian art scene to the rest of the world. “When I came to this country in 1990, it was so amazing to me, so I wanted to find any way to stay, and my background was that of contemporary art so it made sense for me to open a gallery here.” Angarano shares.

People don’t really understand the point of having a gallery opening and exhibitions. Most think that they only exist for the public to enjoy, but these galleries are open for art collectors; the ‘culturally prepared’ few who eventually end up buying art. Stefania further explains “I put so much effort to try and change the way audiences in Egypt view art, but most people are either worried or just don’t really understand what we’re doing.”

It was an uphill battle form the beginning for a number of reasons. Egyptians tend to stick to what they know. Young collectors usually end up going to the same galleries and buying from the same artists their parents and grandparents bought from. “Egyptians tend to stick to the classic pieces and try not to experiment”. This way, the art scene hasn't evolved much or fully matured.

Angarano dedicated Mashrabia to showcasing new artists with a lot of talent. The exhibition hall wasn’t for well-established artists and art investors, it was for the fresh talent and the young collectors that buy art for personal pleasure, not for future financial gain. For the first 15 year or so the gallery was running smoothly and all was fine, until 2011 when the revolution came.

Like most things in Egypt after the revolution, the art scene changed drastically. Artists had more to say and they had the freedom to say it. There was a tremendous amount of hope, and energy. “The revolution defiantly shook things up, especially for young people who now have the opportunity to express freely.” Stefania shares “There were so many ideas that were being thrown around, but I don’t think they were new ideas, I think they were just covered up.”

But, unfortunately, in the period after the revolution, that excitement was short-lived, and, though many thought the art scene would move forward, instead Angarano thinks even saw a setback of 15 to 30 years.

Hosting new and interesting artists really put the gallery on the map. And while young Cairenes enjoy looking at art and finding new inspiration, sometimes actually getting them Downtown was a challenge in itself where galleries are empty for days post openings. “It was a really difficult time for the gallery, especially because of my location; we’re basically in Tahrir Square. People were afraid to be in Downtown so we had to close our doors for a long period.”

The Mashrabia gallery is the first privately owned contemporary art gallery in Egypt, and when others started to see the success that Angarano had fell into, they soon started opening their own spaces.

I feel like my location is unique right now because things are getting renovated and reopened here. Downtown is making a comeback.

But unlike most owners who would try to up their game to compete, Stefania turned her competition into a collaboration. In 2000 Mashrabia Gallery, Espace Karim Francis, and Townhouse organised the al-Nitaq Downtown Art Festival together with private galleries in Switzerland, Turkey, and Tunisia. “The festival went on for a month, I collaborated with all the galleries in Downtown Cairo, we rented rooms from hotels, we rented out apartments, we even had a few pieces in the streets.”

Other galleries started opening in Zamalek, making it the new Cairo art hub, but this has put Mashrabia in an extremely unique position. It’s one of the only spaces in Downtown. “I feel like my location is unique right now because things are getting renovated and reopened here. Downtown is making a comeback.” Stefania tells us. Mashrabia have been organising temporary exhibitions on a monthly basis ever since Angarano took over. Stefania has been choosing only the most unique artists to exhibit. “I don’t like working with academic artists, you know the ones who don’t experiment” Angarano continues “I don’t like working with traditional talent.” Over the years Mashrabia has been responsible for some of Egypt’s art scene giants. Here are just a few: Dr. Adel El Siwi, a Cairo University educated doctor turned painter and one of the most notable of Mashrabia’s artists has been exhibiting at the space since 1998. His work is immediately recognisable. Most of the artist’s work is characterised by long colourful faces that ‘stare back at you.’ Upper Egypt born sculptor Ahmed Askalany’s been showcasing his sculptors at Mashrabia since 2001. The artist regularly finds inspiration from looking at Hippopotamuses and explores the parallels between the animal and humans. The artist explains ”The hippopotamus plays a similar role to that of a contemporary man. It has its own attitudes, moods, behavioral patterns, it can be indifferent or aggressive. The same emotions strike me on the streets, in the media, everywhere in Egypt.” Ultra-contemporary painter Shaimaa Kamel is unknown for her cynical story-telling exhibition ‘Cinderella Tales’ where she uses known cartoon characters, mostly Disney princesses, to express her views on feminism and how these characters have nothing to do with it saying “Even though these princesses are heroines of their stories, they conflict with today’s societies social norms”. She’s been exhibiting since 2004 and has had many solo exhibitions since. One of Mashrabia’s more modern artists, and also one of the youngest, Ahmed El Shaer is known to mix media, especially in digital technologies. Probably one of the biggest names in the art scene, Hany Rashed started out as a self-taught painter, who was eventually mentored by renowned artist Mohamed Abla. His work typically features a combination chaos and calmness. “I find myself amid the chaos of Egypt, the laid back attitude of its people… despite everything, this jumbled up aspect allows for a bit of freedom,” the artist shares with us.

The Mashrabia has been hosting these incredible artists and many more under Stefania Angarano for more than 26 years, and they’ve recently opened a new space adjacent to the one in Downtown called Mashrabia Annex.

The space opened on Saturday the 21st of October with more than 300 pieces from around 40 artists of the permanent collection from the old space. Including works from all of the works mentioned above and many more like the iconic Amre Heiba, ultra-colourful feminist painter Marwa El Shazly and the incredible Kareem Bakry.