If Syria's Gardens Could Speak

As the death toll in Syria rises, gardens and yards turn to cemeteries where martyrs are laid to rest. Tania El Khoury's haunting interactive sound installation Gardens Speak, a part of DCAF 2016, recounts the stories of the dead from beyond their graves. 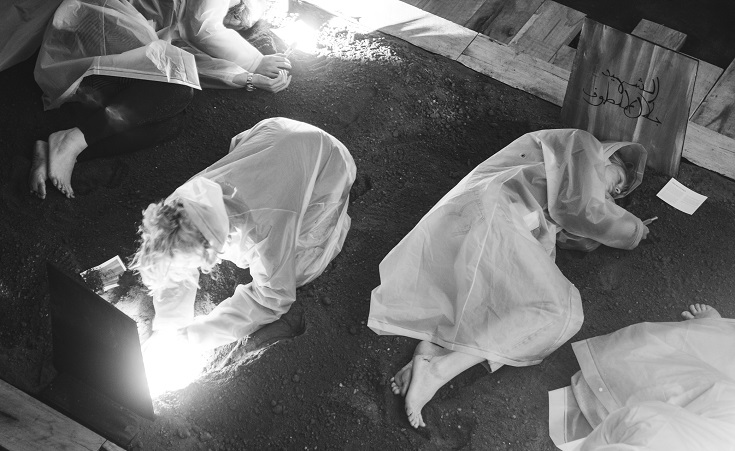 If the gardens of Syria could talk they would tell you of all the blood that has been spilled and all the tears that have been shed on its soil. It would tell you of all the bereaved mothers who have fisted the dirt as they sobbed in manic disbelief and all the bodies decaying within it. Beneath this hallowed land, lies the memory of an idea that had once captivated an entire nation. And even though ideas are bulletproof, as Allan Moore would have you believe, they can be forced into hiding. And hide they did, in the still lifeless bodies of the Syrian martyrs which now rest in the country’s once-vivid gardens and yards, often unmarked. The interments are held discreetly so as to avoid being detected by regime forces that target mass funerals of martyrs.

The gardens did speak to me one sunny afternoon in Downtown Cairo, in an abandoned underground warehouse, where Lebanese-British artist Tania El Khoury held her interactive sound installation Gardens Speak. I randomly picked a card that said ‘Abu Khalid’ before I was escorted to a dark candlelit earth-filled room with five wooden gravestones on each side. I kneeled before Abu Khalid’s tombstone both humbled and sceptical, put my ear on the ground and listened closely as he spoke to me from beyond the grave. It wasn’t long before the tears started streaming down my face as I pictured his brutal and cold-blooded murder at the hands of Assad’s thugs. By the end of the piece, Abu Khalid had become my Syrian Anne Frank, the voice I would put to every suffering Syrian face.

In February 1982, Hafiz Al Assad ordered a military siege of the city of Hama in an attempt to quell an anti-regime uprising. The blockade lasted 27 days during which the Syrian army slaughtered tens of thousands of Syrians – anywhere from 10,000 to 40,000 – including Abu Khalid’s father, uncle and neighbours. Most victims were civilians and peaceful protestors, the incident came to be known as the Hama Massacre. The regime blamed the casualties on ‘Sunni militants’, but the dissidents were believed to have been from all across the political and social spectrum. Abu Khalid lived through the carnage in 1982 only to die in 2011 when Hama was once again besieged and its people slaughtered, this time by Bashar Al Assad’s forces, in a cruel and sardonic twist of fate. The story of Abu Khalid and those of his fellow garden dwellers are based on firsthand accounts from family and friends and retold in Gardens Speak. “The idea came when I saw a photo of a woman digging a grave for her own son in her home garden, early on at the beginning of the Syrian revolution. So the idea came about from that photo and I felt the need to research and find out what’s happening,” Creator Tania El Khoury tells me. “We worked with Syrian activists and artists in 2014 in Beirut. We started by talking to people who knew someone who was buried in a garden. [...] We would send back the stories, have them fact-checked then we found relatives who gave us messages that they had, stories of their families, of their funerals, and we put it together. We invited them to come in to record each story.”

Plato once said: “Only the dead have seen the end of war.” Abu Khalid, Abdul Wahid El Dandashy, Moustafa Karmany, Galal El Lattouf, Ayat El Qassab, Bassel Shehada, Bayan, Bilal El Naeemy, Ahmad Bawaba and Hassan Hassan have all seen the end of war even before it began. All ten martyrs were killed by Bashar Al Assad’s junta between 2011 and 2013 during a nationwide uprising; they were among the millions of peaceful protestors who took to the streets of Syria to demand an end to over 40 years of despotic rule by the Assad dynasty. “This piece documents the first two years of the Syrian uprising, so these are mainly people who were protesting and were killed, there was no IS, it wasn’t militarized, it wasn’t referred to as a civil war at that time,” Khoury says. Tania El Khoury, the Lebanese-British artist behind the installation.

At a time when the international community is slowly backtracking on its earlier position, when the West and other regional players are reconsidering their geopolitics and eating their condemning words and substituting them with some good old ‘concern’, Khoury’s allegiance remains right where it should be. “It didn’t start as a conflict, it wasn’t a refugee crisis, it was an uprising. I think it is very important for us and everyone to remember that it started as peaceful protests against decades of dictatorship and it is easy now to label it a crisis, a conflict, a humanitarian crisis or a civil war. I don’t want it to be seen as a balanced war, it still is a war by the regime on its own people,” she says irritably. “I don’t have a neutral position and I don’t think we should. It is not a propaganda piece, but it’s not a piece that solely focuses on humanitarian issues and the human cost of war, it is a piece that asks people to side with the victims.”

Gardens Speak has toured Europe and the United States, haunting every city it has been shown in and inevitably bringing the voices of Syria’s dead to European and American ears. “The concern of the project wasn’t very much how the West would perceive it; it started as a need for solidarity and bearing witness. It’s about ordinary people, not heroes, who had very specific dreams and hopes, that was the first attempt to unearth some of these stories and also challenge the narrative of the regime,” Khoury explains. “This piece is also about what made these people [Syrians] refugees in the first place. In Munich for instance, they’ve seen all these Syrians around but they don’t know anything about them and suddenly they heard these stories and related to them. Each person will take it differently.” In times of conflict, death is often politicised and reduced to a supporting argument among opposing factions, a statistical figure to vanquish one’s political adversaries. Martyrs are celebrated by those who survive them, and in doing so, their causes and values are propagated. In Syria, martyrs’ families are often made to sign statements exonerating the regime of their loved ones’ deaths to spare Assad the trouble and embarrassment of explaining how he killed hundreds of thousands of his own people to remain king of the hill.

The world of the living and the realm of the dead have always existed separately, but these two parallel realities collapse on each other in the fertile plains and high mountains of Syria, the dead are never really dead and the living struggle to live. People are buried in the very yards that saw the earliest stages of life; their first steps, their first attempts to ride bikes and fly kites. The very gardens where they once saw reflected the promise of life are now their final resting places, a stone’s throw away from their childhood homes. Not even the dead can escape Assad’s iron fist as their deaths are conditioned to fit a narrative of the regime’s design. And between geopolitics, strategic interests, deadly sectarian spite and tawdry hawkish opportunism, the world has lost sight of the Syrian dream of inclusive freedom and equality; it is no longer seen as a fight for a people’s right to self-determination, but rather a ‘civil war’. But the word ‘war’ implies that both sides are on equal footing which is not the case. It is a one-sided assault the Assad regime has waged against all of Syria since 1971 when Hafiz Al Assad was appointed president.

This century-old ‘bad cop even worse cop’ paradigm continues to dictate Middle East politics, and the world is slowly recognising Bashar Al Assad’s narrative of secular vs. Islamist militancy as Syrians remain stuck between the proverbial rock of the regime and the hard place of Islamic extremism. But the rise of ISIS and Nusra and other terrorist groups are the result of years of injustice and tyranny. The blame for Abu Khalid's death rests right where it belongs, on the Assad regime. And to forget that or resort to neutral and politically-correct lexicon like 'conflict' and 'crisis' to somehow mitigate these atrocities, so as not to offend those with misplaced loyalties is to betray the memory of hundreds of thousands of Syrians who were robbed of their lives, surely they are more worthy of our courtesy.

For more about DCAF's performances check out their Facebook page here.