The satirist's directorial debut, based on the memoirs of British-Iranian journalist Mazlar Bahari, has received rave reviews at this year's Toronto International Film Festival. 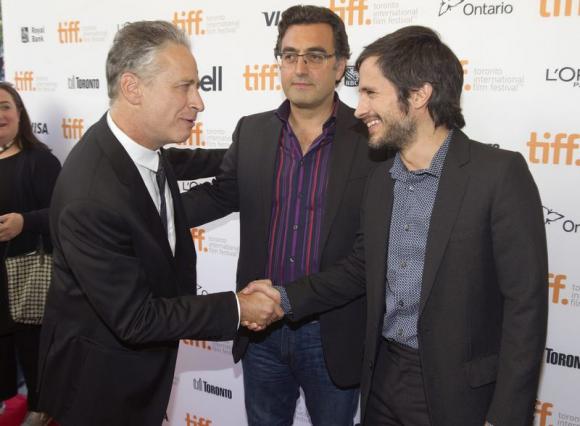 You would be hard-pressed to find an Egyptian who doesn't remember when Jon Stewart, the inspiration for the Bassem Youssef show, actually came to Egypt and made an appearance on El-Bernameg. At the time, Jon Stewart was scoping locations for Rosewater - his directorial debut which has just been screened at this year's Toronto International Film Festival.

Jon Stewart's decision to direct Rosewater is arguably fuelled by immense guilt. The film is based on the memoirs of British-Iranian journalist Mazlar Bahari, who was detained and tortured for 118-days in the wake of Iran's 2009 presidential election which resulted in nation-wide protest. It was during this detention that Iranian interrogators used a humourous interview from The Daily Show with Jon Stewart as evidence that Bahari was a spy. These faceless claims were repeatedly used during torture session by an interrogator that Bahari describes as smelling of rosewater.

Taking a break from the Daily Show for much of 2013, Jon Stewart learned a lot filming in Jordan during the summer and subsequently Ramadan. The first lesson learnt was the importance of casting. Even though Stewart would have rather had Iranians playing Iranians, he realised that acting trumps nationality. Playing the role of Bahari is Mexican actor Gael García Bernal, and playing the interrogator, known to Bahari as only Rosewater, is Kim Bodnia; a Danish actor.

Despite filming with a shoestring budget, Rosewater has received critical acclaim at its premiere at the Telluride Film Festival. Currently the film has just been screened at TIFF, and is sporting an 85% rating on Rotten tomatoes. Rosewater is set to open November 7th across America, but is still unclear when and if it will arrive in Cairo.

Rest assured if it does we here at CairoScene will tell you where and when.