A stunning series of photos by Moroccan artist Hassan Hajjaj, currently on display in New York, shed a light on the kick-ass girl biker gangs on Marrakesh. 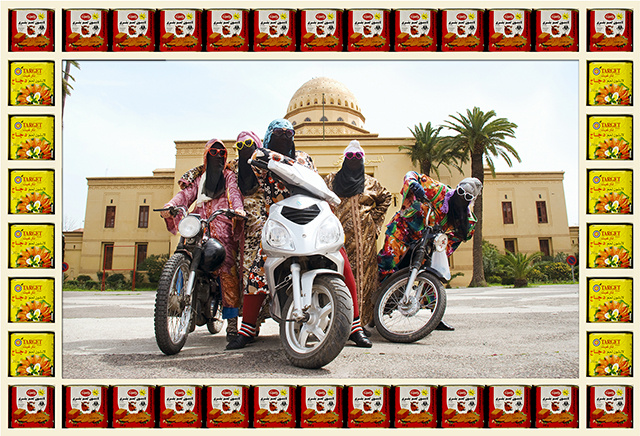 Shove over Hell's Angels, there's a new motorcycle gang in town. Well, in Marrakesh at least. Same diff. When we think motorcycle gangs, we think hardcore bouncer-style tattooed guys with shaved heads/long stringy hair (it's gotta be one or the other) that you don’t particularly want to mess with. Bandana optional. And if it's a female bike gang, they're lesbians. Or according to your grandmother, obviously banat matrabbetsh. But there are - get this - female bike gangs, who are neither lesbian nor decked out in head to toe leather, and they ride their bikes in none other than Arab country Morocco. Introducing the female biker gangs of Marrakesh. Seriously.

These girls come decked out in polka dot abayas and sequin covered niqabs - and heart-shaped sunnies to complete the look. The fashion police may or may not approve of these blindingly bright outfits but these "biker chicks" do wonders to squash a whole array of preconceived notions about Arab and Muslim women. They are women who are work, and have children and speak up to five languages (definitely more educated than us, that's for sure) and ride their bikes to work and back every day. Obviously, they're not a proper Sons of Anarchy type gang – they haven’t blown up anything recently that we know of – but they're still pretty hardcore and we wouldn’t particularly want to run into them in a dark alley. We imagine they could hold their own in a fight.

It's a real, legitimate street culture in the city of Marrakesh, and their images are captured by Moroccan-born, UK-based artist Hassan Hajjaj in a series of photos entitled 'Kesh Angels', who wanted to both make Morocco and its culture the subject of his photos and to counter stereotypes about Arab women. Well done. The only women we see on bikes here are sat side-saddle style behind their husbands, precariously balancing a child or two in one arm and clinging to their groceries in the other; it's a family affair and far from the independent woman these photos convey. Hajjaj was inspired by the motorcycle culture in the city and motivated by the women themselves. "I'm impressed with their strength and really aim to show their independence as normal." The exhibition is currently on display at the Teymour Grahne Gallery in New York.