Previous Post
AUC Students Strike in Protest of Recent Tuition Fee Hikes
Next Post
Video: AUC Students Chant 'My Dad is Not a Thief, You're The Thief'

Tackling the blockbuster hit Laf Wa Dawaran, Emad El-Din Aysha finds some interesting similarities between it and far too many American movies. 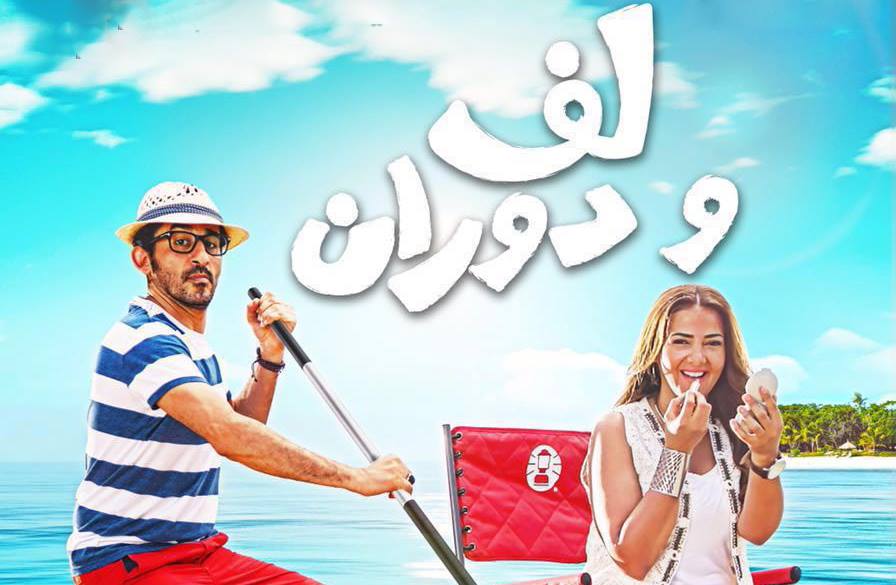 Just watched Laf Wa Dawaran (Back and Forth), staring Ahmed Helmy and Donia Samir Ghanem, and – for the life of me – I can’t understand why it’s such a damn popular movie. It really isn’t worth the effort of watching, and yet this is the most popular movie in the cinemas as we speak, side-by-side with the far superior Kalb Baladi [Local Dog]. The director, Khaled Marei, seems to be untested when it comes to comedy, responsible for the depressingly pointless TV series like Al Ahd (2015) and Niran Sadeeka (2013).

One good thing that comes out of this lacklustre romp is that you understand why tourism is doing so badly in Egypt. It isn’t just the security situation, it's nepotism and near-sightedness in the industry itself. The erstwhile hero Nour Qabani (Ahmed Helmy) takes his whole fatherless family (boos, hiss) on a vacation to Sharm El-Sheikh, using the ticket of a friend of his who was originally going to on his honeymoon there, while the Laila Al-Batouty (Donia Samir Ghanem) also heads there because her internet company is desperate to make money from the event. They end up having to play husband and wife to avoiding getting into trouble with the law. To make matters worse, Hamada Negm (Bayoumi Fouad) is assigned by the hotel to make ‘sure’ they’re happy and, in typically Egyptian fashion, he’s breathing down their neck all the time. Hardly a recipe for a healthy tourist sector.

The film’s premises are bloody obvious from the word go, when you have Nour’s grandmother extolling the vices of her grandson, talking about his obsession with all things foreign – Cuban cigars, American movies – and so her fear (shared by all the women in her family) is that he will wed a foreign girl and leave them. Enter Laila, the obvious Egyptian counterpoint to the Italian blonde bombshell Pearla (Bea Beatrice) the hero intends to befriend (but nothing more) while in Sharm El-Sheikh.

The moviemakers forget, typically, that Donia Samir Ghanem doesn’t ‘look’ terribly Egyptian, that Italian girls are very much like Egyptian women (once they get married and turn into shrews), and that the woman playing Nour’s mother – Mimi Gamal – is actually half Greek. To add insult to injury, the movie strikes me as a rip-off. Searching through the video library of my mind I finally figured it out – Failure to Launch (2006). That’s the quintessential movie about the man who doesn’t want to grow up and leave his parents, forcing his parents to hire a girl to get him out. And, wouldn’t you know it, Nour here is inexplicably wedded to his extended family and the gang hire Laila to get him to dump the foreign chick, and in the process they fall in love. There’s even a scene where he makes a feast for his family, giving each one exactly what they like, after he finds out what they’re planning.

There’s a similar dinner scene with Matthew McConaughey in Failure to Launch. Everything feels like an imitation. Not just Failure to Launch, but also The Wedding Planner for Donia Samir Ghanem’s character, and Down with Love (2003) for Ahmed Helmy, taming a philandering man into marriage. The last scene has the hero saying the man is the brain but the women is the neck, because she can force him to do what she wants him to do – a direct snatch from My Big Fat Greek Wedding (2002)!

These pointless borrowings would explain the inconsistencies in the storyline. Nour behaves illogically throughout. He consoles a friend to live it up and forget marital responsibilities, tricking the man (Yasser El Tobgy) into giving him the tickets for the deluxe sweet so he can live it up himself and get away from his nosey, repressed family and get footloose with white chicks. Then why on Earth did he insist on bringing them all with him? (His overly attached mother, nosey grandmother, still unwed aunt, and obnoxious sister;Mimi Gamal, Enaam Salosa, Sabreen, and Jameela Awad, respectively).

I’d chalk this down to bad directing, not just bad writing. Donia Samir Ghanem, while a top-notch comedian, has problems here. You feel like she doesn’t understand the character fully because there isn’t enough there to understand. She’s really got to team up with Ahmed Mekki again. She always excels with Mekki in terms of good looks – actually being in character in terms of appearance – comedy antics, and acting ability. She’s very nicely tanned here and has reddish brown hair, but you don’t feel it serves anything in terms of bringing out the character she’s playing. She doesn’t look uptight enough!

The performances are stiff all round. Helmy is stiff normally but everybody looks like they can’t walk properly, as if their legs are tied together – the chains of convention? The gags simply aren’t funny. The magazine gag is downright disgusting, where the women try to convince the Italian girl that Nour is homosexual. How is that supposed to make you sympathise with them? Something like that almost happened to the son of a friend of mine, with relatives trying to strong-arm her son into marrying his cousin through the rumour mill.

No Man is a Cliché

Bayoumi Foaud’s character alone is a testament to the cultural precepts that have messed up the Egyptian family, like the father who tries to ‘force’ a couple to love each other to the point that they end up hating each other, whatever their initial feelings were. Can you get romantic with a girl if her father or uncle sends after you every five minutes to see if you’re keeping up your side of the bargain? Don’t ask me how I know.

I ‘suppose’ they are trying to say that the family should play a more proactive role in encouraging romance between young people – the grandmother reminds her daughters of this – but it just doesn’t hold water here. Having the aunt unwed because she’s a career woman doesn’t work as she has no problem romancing the hotel representative, but nothing comes of it and for no good or bad reason. She’s clearly not picky if she’ll put up with a balloon-shaped man like Bayoumi Foaud.

There are some ‘moments’ in the movie, such as where Nour and Laila discuss the nature of problems between men and women – miscommunication – and how families should be close to each other, but it’s just not convincing. You feel the moviemakers themselves aren’t convinced of this, that these aren’t genuine themes in the movie. Note that the dynamic duo are forced to stay with each on an island for way too long, which fits in with the whole Egyptian philosophy of treating young couples likes cattle; leave them long enough together and they’d eventually mate, out of desperation. There’s a Farid Shawki movie that deals with that, if thankfully taking a critical stance on this practice.

The only reason this movie should be popular is that it’s different than the rest of comedies in the movie theatres now, a simple light-hearted comedy amongst the grossed out comedies and imitation action flicks out there. Still, you feel those other movies, no matter how disgusting the gags are, aren’t nearly as vacuous.

Laf Wa Dawaran is just plain weak, the product of an overly self-indulgent society that can’t think outside of its frame of reference so just ends up recycling the same old mantras over and over again. Let’s just hope the Egyptian economy can weather the off-putting cinematic storm in the meantime!