It's time for a string art canvas takeover because, let's face it, we're so over the cliché flowers mama has all over the wall. You might want to clear your wall for this. 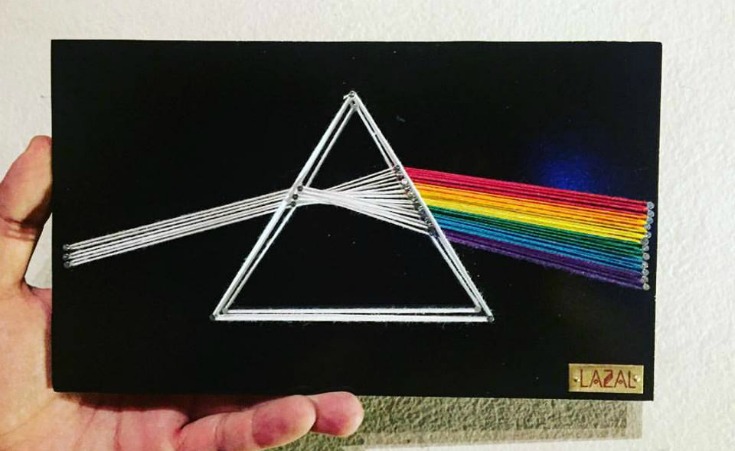 If you’re an Egyptian, or actually an Arab in general, you’re probably sick of the not-so-realistic copies of flowers that seem to flood the walls of your house. Maybe your mom really loves flowers, or maybe it’s just time to admit that this ‘trend’ has died out. Yes, flowers are beautiful, but your eyes (and probably those of your guests) are most probably now tired of staring at that distorted poppy (or the more classic sunflower) every time they wander to explore the space around.

It's time for something new – something that doesn’t involve random wildlife or galloping horses.

To save your wall from the mundane and infuse your interiors with a fresh feel, there's Lazal Gallerie’s custom-made string art canvases. Not only will the pleasant strangeness of this kind of art achieved through wrapping threads around pins on a canvas fill the space with refreshing aesthetics, but the gorgeous designs depicting new concepts will sure make your walls more reflective of those who live among them. However, the designs and their technique did not come as a walk in the park initially for Lana Helmy – co-founder, PR handler, and string artist – and fiancé Amr Kamal who is the designer, art director, and the second co-founder of Lazal. The self-taught artist tells us that the project was driven by her passion for crafts and DIY projects. “We failed miserably at first,” Helmy tells us lightheartedly, but eventually the partners obviously mastered this form of art, especially that they always aimed at “getting the best quality of woods and nails as we care a lot about the quality of our works and always wish for them to be unique.”

“The initiative was so spontaneous, we never had plans for making a business out of it,” Helmy tells us. But now the artist proudly expresses her happiness that “we are the first to introduce the idea of string art to the Middle East.” Whether you’re a fan of Superman (or your supermom), calligraphy, Egyptian symbols, Pink Floyd, or even Star Wars, Lazal Gallerie’s designs cover a spectrum of designs, custom-made design, or quotes that you have in mind. Having those creations hung on the walls of your home or a friend’s house will not only add to the appearance of the interior, but also emit a warmth that is more personal and intimate to you than abstract sketches of daffodils that you’ve had in that living room for years.

According to Helmy, the most common designs that people ask for are either Batman-related designs, Pink Floyd, or calligraphic names. She also tells us that people are very receptive to Lazal’s designs and technique, even though it is rare to find a lot of people familiar with this art technique despite it being quite well-known in Western countries. Of course, it goes without saying that for all those who have come to embrace the fact that they suck at gifting people, Lazal Gallerie’s creations come as a guaranteed awesome gift without sweating over whether that friend is into miniature dog figurines or trying to remember whether your 24-year-old friend has ever expressed their undying love for knitting.