Ahead of Arts-Mart's Artists of Tomorrow exhibition, launching this Friday 30th January, we meet with the businesswoman, mother-of-three and artist Lina Mowafy, to delve into the intricate depths of her signature style. 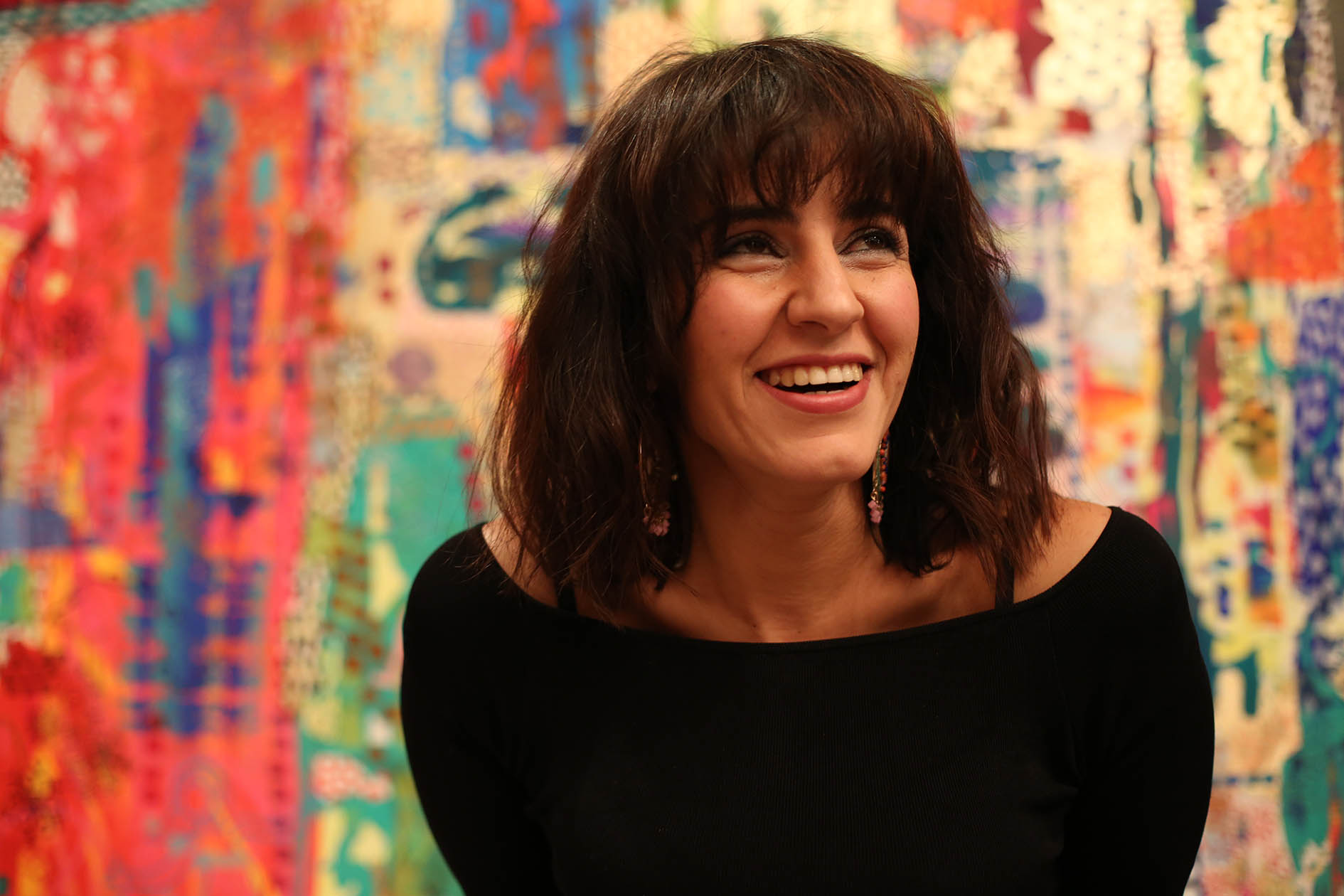 As we settle into a plush couch in Lina Mowafy’s home studio, the artist, whose work has appeared in countless exhibitions and graces the homes of art collectors in the know, she’s visibly nervous. “Don’t ask me about my ‘artistic message’!” she pleads. “I find it really difficult to talk about my work… It’s just so personal to me.” As one of just two females exhibiting in Arts-Mart’s upcoming Artists of Tomorrow group show, she’s certainly aware that the spotlight is quite firmly on her. The 34-year old mother of three, business owner and artist definitely has a lot on her plate, but it becomes abundantly clear that her art is her escape from the madness of Cairo’s fast-paced life, even when her canvases convey exactly that. “It’s like a form of therapy,” she says, wistfully. “I get lost in front of a piece of art – sometimes I don’t even know what it is until I’ve finished.”

The AUC graduate has long been artistically inclined, having gotten into a fight or two with her parents during her formative years when she’d doodle on her bedroom walls. “I didn’t take my degree too seriously to be honest. It wasn’t until I graduated and I shadowed an esteemed artist for over a decade that I really felt like I was adding to my technique,” she says, as she curls up on the sofa. During these years, she was also a fulltime advertising executive, which anyone will tell you is one of the most hectic and time-consuming jobs out there. “My heart wasn’t in advertising so I just quit overnight. I decided it was a waste of time for me and I realised that art was what I wanted to do,” she explains of her bold choice to follow her dreams. Soon she would head to Italy to study at one of the world’s best-known art academies, Charles Cecil Portraiture School in Florence, to hone her craft, despite already embarked on motherhood with her first-born, Ismail. “Then I came back and I started painting every day,” she says simply.

Indeed, motherhood has deeply affected Mowafy, personally, professionally and, of course, artistically. Soon, her family grew as she discovered she was pregnant with twins, and shortly after their arrival she was off to London to study at the prestigious Central St.Martin’s – no rest for the wicked. “Initially I was very classic,” Mowafy says of her style, “my problem with the classical style was that it didn’t give me much room for colours and colours are a big deal for me.” Even to the most inexperienced of art appreciators this statement is abundantly clear. From her self-customised Converse sneakers and printed sweaters to her art-drenched home and, of course, her own work, if you could only use one word to describe Lina Mowafy, it would be ‘colourful’.

Often dream-like and abstract, the collection she’s preparing to display at the upcoming Artists of Tomorrow exhibition certainly fits the theme of her life, as she uses mixed mediums to create painstakingly detailed pieces, brimming with electric hues, geometric shapes and the occasional metallic element, expertly layered to create a depth rarely seen in Egyptian art today. “One of the things I found very difficult to overcome was that everybody my age was painting very ‘Egyptian’ themes and I didn’t grow up in that set up. When I first started out, the usual comments were that it’s very ‘western’. I realised I couldn’t paint those typical rural scenes such as the farmers or the feluccas. It’s not my life and I don’t relate to it. You paint what you know and I don’t know any of that,” she explains. Instead, her art is in equal parts wonderfully whimsical and almost aggressively urban. Her landscapes scream Cairo even when her interpretations of the landmarks, scenery and familiar sights are abstracted, distorted and embellished. “Cairo is a chaotic city. And I love the city but the city doesn’t love everybody,” she says simply.

The layering that defines her latest series is punctuated with the odd portrait. When asked if these people – from a haunting woman whose eyes tell a thousand stories, to groups of gossiping girlfriends – are people she knows, Mowafy shies away from a direct answer. “Some are people I know directly while some are representations of people I don’t want to put out there or what I think people would look like in another lifetime,” she says cryptically. Nevertheless, her interpretations, whether their inspirations are obvious or not, are able to tell stories without words, conveying the connection between Cairo and her inhabitants in a powerful and poignant way. “Every piece of art is a story that the artist begins and the receiver finishes off. You’re free to take whatever you want out of it. And, actually, the more the stories that come out of the same work, that means the more layers and depth it has,” she explains.

For more about Arts-Mart and the upcoming exhibition, check out their Facebook page here.