Archaeologists have discovered what might be the oldest copy of Mark's Gospel, hidden inside an ancient Egyptian mask... 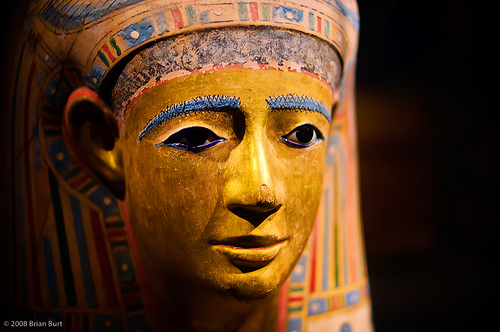 Seems like every week scientists are making discoveries in Egypt that prove we basically beat everyone ever at being a crazy old civilization. In the latest such discovery, archaeologists have found a fragment of papyrus that was used to make a mask for an Ancient Egyptian mummy that they think may contain the oldest copy of a gospel in existence.

So far, the oldest surviving copies of the gospel date back to the second century AD, but this new find was written in the first century AD.

The piece of papyrus contains a passage from Mark’s Gospel and was discovered by an archaeology team from Acadia Divinity College. The team was in the process of taking apart the mummy mask when they discovered the papyrus containing the gospel written-on piece which had been reused to create the mummy’s mask. Apparently though, this is not the only discovery the team made – they found hundreds of new texts, including stories by Homer. Craig Evans, a professor of New Testament studies at Acadia Divinity College, spoke to Live Science saying, “We’re recovering ancient documents from the first, second and third centuries. Not just Christian documents, not just biblical documents, but classical Greek texts, business papers, various mundane papers, personal letters.”

Moral of the story is, however old you think your country’s civilization is, ours is older. Sorry, that’s not the actual moral of the story, we just like winning at something. Anyway, the research team are currently analysing the various texts, particularly Mark’s Gospel to see if any changes were made to it over time.