Mawaweel Festival Returns for Round Six This Ramadan

Fresh off the success of the last five years, Cairo Jazz Club Agency and darb 1718 are bringing Mawaweel Festival throughout the month of Ramadan. What's in store this time around? Check it out... 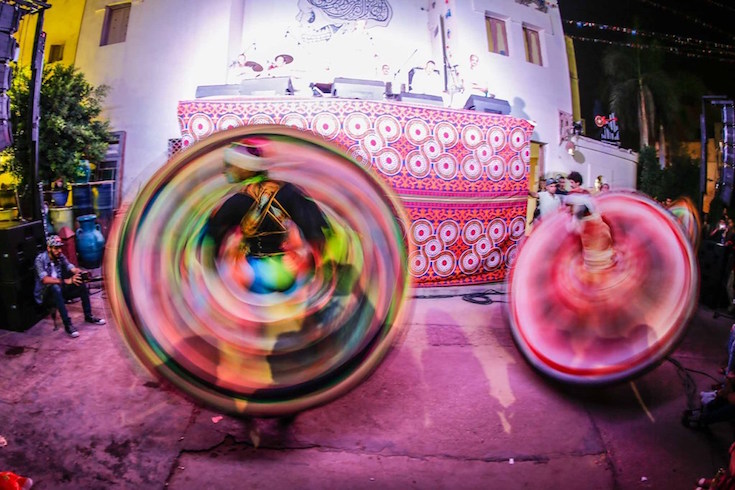 Ramadan isn't just about food – or lack thereof; there's got to be more to life than trying to find any way to pass the long (hot) days, right? You know, there's family battles over the last piece of kofta at the iftar table, long hours binge watching your favourite mosalsalaat, to going out with old friends ba3d el maghreb, and the same things we do year in and year out. The workday may end early, but the night is still young; so, what's a Cairene to do? This year, Cairo Jazz Club Agency and Darb 1718 are back with an energising series of events that'll push you past the post-iftar food coma and into an exciting world of music and arts. Mawaweel, which takes place at Darb 1718 – the city's cultural hotspot – sets out to put a little soul into the festive month and keep you away from yet another monotonous Ramadan.

Returning for the sixth instalment of their long-running annual festival, Mawaweel is bringing together an increasingly larger and diverse selection of visual art installations, musical acts, cultural traditions and the like. A change from the typical club scene, Darb 1718 makes for a much cosier experience for Mawaweel festival – you know, friends, family, closeness, and all that wonderful stuff that this season is all about. Plus, a little fresh air with music in the background seems better than any club out there. Shaking things up from last year's format, Mawaweel VI will be split into two differing schedules, each with their own unique vibes. Taking to the stage next are Ahmed Bahaa and Moe Al-Arkan - aka Sharmoofers - who return with their homegrown mix of reggae, funk and pop-infused rock. With lively, upbeat vibes, Sharmoofers make it impossible to stop you from grooving along to their unique sound. The next Thursday, June 23rd, kicks off at 9:30 once again with Makan, who are slowly reviving Egypt’s rich folk music history. Makan preserve and maintain the Egyptian musical traditions we’ve become all far too disconnected from, before they’re purely reserved for tourist novelty. As a grand closing for this part of the festival they're bringing in Massar Egbari; the four piece Alexandrian rock collective need no introduction –  their infectious, sublime blend of rock, jazz, alternative, and Oriental sounds has taken the region by storm. Definitely not a show to miss.

It doesn't stop at music; every day at Mawaweel VI festival includes a craft bazaar and the Bread II Art Exhibition, where they're combining two of our favourite things: bread and art. Given our insatiable love for 3eish baladi, we're curious to see how artists draw inspiration from the staple traditional Egyptian bread. We thought we loved our food, until we learned that both artists and viewers alike are being tasked with the pseudo-existential challenge of answering the question: what does bread mean to me? We're nothing short of curious... and hungry. 'How do these guys keep spinning without getting dizzy?' We're obviously talking about the quintessential tanoura dancers who just keep spinning and spinning, leaving us a little more mesmerised than we'd like to admit. They're also back again this year, with their show following each day's festivities. But, seriously, how don’t these guys get dizzy? For the first time in the long-running festival's history, Mawaweel is switching things up a bit and hosting a series of intimate events, taking place on Saturdays. Here's the catch, though: they're only for 100 special guests at a time. On June 11th, AfriCairo takes the stage with a mesmerising pan-African music project spearheaded by Eritrean-Egyptian multi-instrumentalist Ahmed Omar, who brings together the rich musical traditions of both Africa and the Orient into an adventurously bombastic combination.

The following week, on the 18th, the brass quintet El Nafikha return with their theatrical Oriental style, through which they tackle political, historic, and emotional themes. And on the 25th, the beloved jazz-fusion jewel of the Egyptian underground, Eftekasat, bring their explosive East-meets-West experience that’s sure to liven up even the dreariest Ramadan night. Finally, on the 2nd of July, seven Oriental jazz-fusion specialists come together as the musical jigsaw puzzle El Dor Al Awel to wrap up this eclectic musicfest.

Since the typical khabt club nights we're used to aren't happening anymore – at least for this month; we make no long-term commitments here – let's flip the script and embrace our rich history and traditions with some great music, food, and that sense of Egyptian unity that's all too rare during the rest of the year.