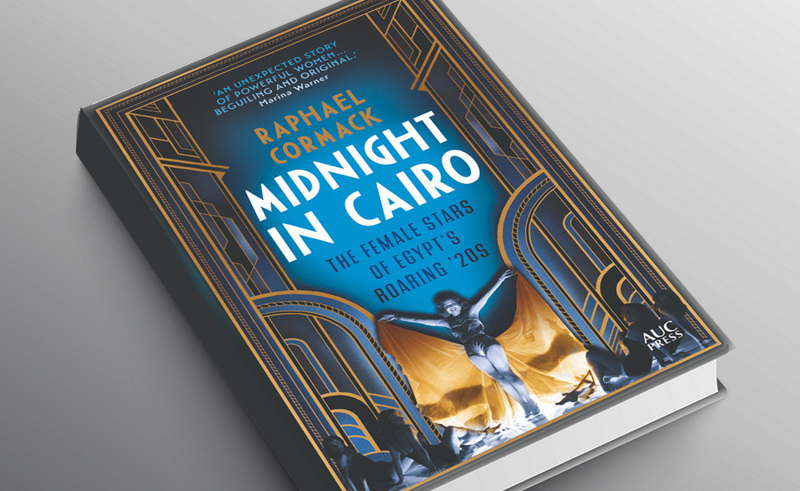 When I first started reading Raphael Cormack’s Midnight in Cairo, I expected to find an oriental version of Woody Allen’s 2011 film of a similar name. Perhaps there’d be a clueless protagonist meandering the streets of Cairo in the 1920s, sipping wine and immersing himself in the wild happenings of the Egyptian nightlife that was booming at the time. Perhaps he’d converse with Naguib Mahfouz and Umm Kulthum; those mammoth icons from the region that are recognised the world over. What I found however, was a read that was far more informative and intriguing than anything I could have imagined.

Midnight in Cairo is a sweeping non-fictional account of Cairo’s nightlife in 1920s and 1930s. From the cabarets and dance halls to the thriving theatre, film, and music industries, Cormack immerses his readers into what was once one of the most multicultural cities and more specifically, entertainment industries in the world.

“In its heyday, Cairo’s nightlife could rival that in Paris, London or Berlin. Any resident of Egypt’s capital city in the early twentieth century could have claimed, with justification, to be living in one of the great cities of the world, at the centre of many different cultures.”

Not only did Cairo earn this title because of its political importance to the British and the Ottoman’s, each of whom worked tirelessly to maintain control over Egypt, but because of its magnetic impact on the most talented entertainers across the region. Whether it was Syria or Palestine, France or Greece, Cairo attracted the bold and ambitious from all over the world. The result? A remarkable amalgamation of cultures that allowed for the Egyptian entertainment industry to join the ranks of cities like Paris, London, and Berlin.

While reading Midnight in Cairo, I marvelled at the vaudeville productions on Ezbekiyya street, the charm of the numerous dance halls, and the innovations of the traveling acting troupes. However, I was also sad to realise how little of that world has been preserved, let alone celebrated into the present. The West’s monopoly of narrating history is nothing new, but reading Midnight in Cairo is a painful reminder of the cost of allowing that monopoly to persist. The struggles and accomplishments of hardworking men and women, particularly those made vulnerable by the unforgiving nature of the entertainment industry, have been largely eclipsed, if not altogether forgotten.

This is what makes Midnight in Cairo such an important read for audiences in the 21st century. The book resuscitates the streets of Cairo in a way in which modern visitors can hardly picture. Almost none of the cabaret, dance halls, and theatres have survived today, usurped by decrepit buildings that are plastered with bills and heaving on their hinges. These ruins reveal nothing of the community of arts and culture that they once nurtured, and exploring why that is, is one of Midnight in Cairo’s main objectives.

Cormack structures his book into three parts. The first examines the modern history of Egypt’s nightlife from the late 19th century until the 1920s, while also exploring it within the context of colonialism, war, and revolution. The second part surveys the lives and accomplishments of some of the most influential and important female figures of Cairo’s 1920s entertainment industry. And the final part recounts the impact of the second world war and Nasser’s revolution on Ezbekiyya’s world-renowned nightlife. Together these parts operate as what Cormack calls a theatrical story told in three acts —a fitting analogy, given the action packed anecdotes that they share, as well as the tragic telling of Egypt’s modern cultural demise.

The Vaudeville Cast of Feminists

While the first and last acts of Midnight in Cairo are pretty didactic in how they are told, the highlight of the book no doubt lies in the theme of feminism that that is catalysed by the brief biographies of six women: Rose al-Youssef, Fatima Sirri, Mounira al Mahdiyaa, Oum Kalthoum, Aziza Amir, and Badia Masabni.

Each an inhabitant Egypt’s nightlife district, the collection of women who Cormack selects for the task of conveying Cairo’s feminist revolution is unique in that none of them fit the classic mould of 20th century Egyptian feminists. In fact, coming from poverty, being illiterate, and often spending their lives in what Cormack calls ‘the margins of so-called decency,’ these women were propelled by the desire to not only survive but to pioneer their respective industries.

Rose al Youssef for example, the Lebanese born actress, when frustrated by the superficial coverage of the Egyptian entertainment industry, decided to establish her own magazine. Named after herself, it provided an informed opinion on matters pertaining to the arts and offered members of the nightlife community a platform to share their own insights. Similarly, Aziza Amir, acutely aware of the disadvantage facing Egyptian filmmakers owed to there being no sound-recording technology in the country, traveled to Istanbul where she teamed up with the great Turkish actor, Muhsin Ertugrul, to make not only the first Turkish talking film, but became the first Egyptian actress whose voice featured in a talking film.

The achievements of these women however were not limited to the boundaries of the entertainment industries. Their ability to provide for themselves enabled them to fight for their rights and to live within society as they pleased. It was this gumption that allowed for Fatima Sirri (for example) to take the well respected Sharaawi family to court in 1930 in order to ensure that her former marriage to the son of Huda Sharaawi was not only recognised, but that the legitimacy of their child was also made official.

“Fatima’s early twentieth century lawsuit has continued to echo into twenty-first century Egypt. In similar circumstances, the costume designer Hand al-Hannawy launched a paternity test against the actor Ahmed al-Fishawy in 2006 following a similar urfi marriage and the birth of a daughter, Leena… Hend eventually won the case on appeal.”

The role of Cormack’s selection of divas in carrying the feminist movement during the early 20th century cannot be overstated, and yet, these women occupied a curious place amongst the psyche of Egyptian audiences. Though loved for their performances, they were judged for their professions. Seen as vulgar, eccentric, and entirely divorced from the respectable image of what a woman should be, many looked down on the women they privately idolised; revealing the polemic story of Egypt’s continuing struggle with gender equality.

Midnight in Cairo does an excellent job of presenting Egypt’s role in spearheading the film and music industry in the Middle East but also its resistance towards celebrating female autonomy. It does this in many ways, but especially by exploring the rivalry between Mounira al Mahdiyya and Umm Kulthum. While the former was daring in how she conducted herself, not shy about singing vulgar lyrics, or about her penchant for partying, the latter observed a much quieter lifestyle that appealed to audiences as an example of how a proper woman should behave.

The result of the competition between both women can ultimately be understood by the fact that it is Oum Kulthum and not Mounira al Mahdiyya who is revered as the queen of Arabic music today. This outcome demands that lots be read between the lines, particularly the deep impact of Egypt’s psycho-social constraints on what a respectable woman should entail.

“Mounira gave voice to a different kind of Egypt: It was colorful, glamorous, and transgressive, and with her songs about dark-skinned lovers, her devotion to zar, and her troupe of Sudanese dancers, it also made Egypt’s connection to Africa clear. Her libertine lifestyle, part of what made her a huge star while she was alive, embodied the edgier and more provocative parts of Egyptian identity that have been pushed out of the mainstream in recent decades.”

Between Melancholy and Modernity

Midnight in Cairo is an insightful read that makes its readers want to travel back in time to sip wine sitting front row at Madame Badia’s Salas (cabaret), while also wanting to cry over the virtual extinction of such places in Egypt. It offers brief but illustrious accounts of the life and achievements of six powerhouse female performers who not only confronted poverty and inequality, but the volatile shuffling of political powers.

Moreover, Midnight in Cairo provides a brief yet thorough look into Egypt’s nightlife in the early 20th century that leaves its readers with much to think about; primarily, the correlation between the nation’s resistance towards the autonomy of its women, and the collapse of its arts and entertainment industry.