Mina Nasr's life-sized art functions as an ongoing visual critique of post-revolutionary Egypt, and of society as a whole, exemplifying the bilateralism of the relationship between art and reality. 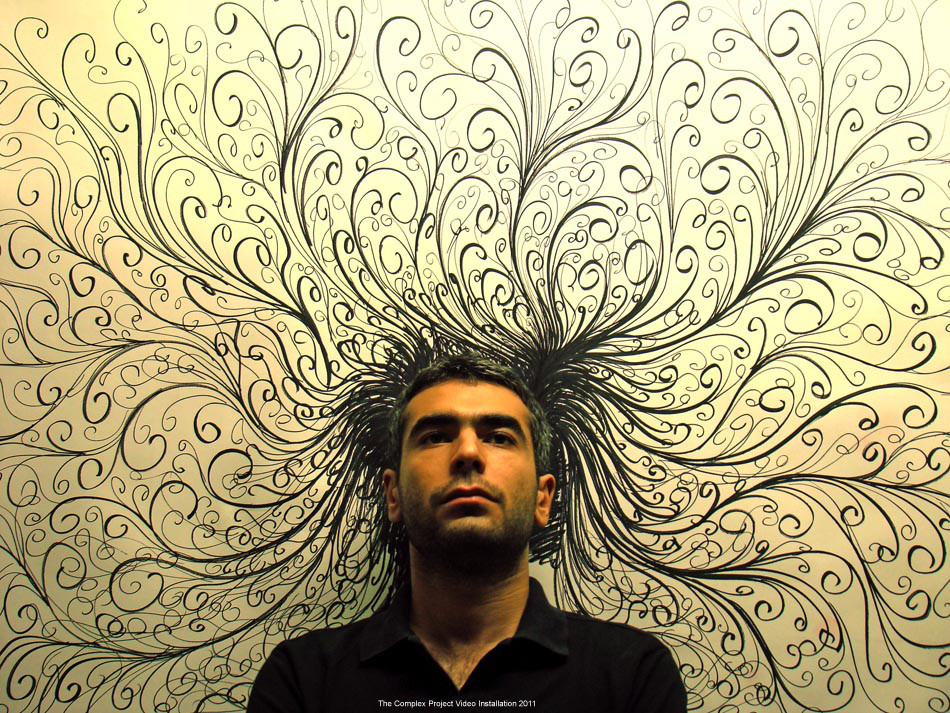 His last project, entitled Movement, which was exhibited under the Swiss Art Council, Pro Helvetia, in Zurich, plays around the idea of the differences that affect the very mannerisms of people who inhabit different cultural spaces.

Based off of his observations during his time in Switzerland, the exhibition features various scenes in which small figures play around an oversized human hand or feet. The series serves as a commentary on the way in which he experienced the difference between people's movements in Switzerland and Egypt.

"I was discussing my own experience there, and how I was trying to disrupt the system in Switzerland, and the way people live there. There is a system in the way people stand there - they anticipate that someone might stand near them, so you'll find that they stand very regularly in lines," Nasr says.

The exhibition also plays on the recurrent theme of the "marid" or genie in classical Arabic literature and stories, such as the 1001 Arabian Nights - whereby the cultural incongruity disrupts the peace of the social order in Switzerland.

And indeed, much of his work seeks to either disrupt or comment on different cultural phenomena. A previous exhibition he worked on with artist Yousra Mekawi in Artellewa in 2012, entitled Shubra Line, features life-sized depictions of people on the metro, accompanied by common sounds from the metro being played over with an excerpt from the film E7na Btoo3 el-Autobus.

"The exhibition discussed political aspects of the metro in Egypt," Nasr adds, whereby he depicted the way in which the metro serves as a stage or microcosm for Egypt's myriad political developments.

Other exhibitions of his have more explicitly political messages, such as his Sacred Heart exhibition, as well as his project on the Egyptian Elections.

Sacred Heart addresses women who lost their children during the revolution and its aftermath, while his Egyptian Elections project comments on "the idea of the omnipotent Pharaoh, and the unconditional love [Egyptians have] for a leader."

"I just wanted to alert people about this," he adds. In that sense, one can read his art as mirroring and critiquing contemporary political developments in a visually interesting way. The project, which went viral on social media after it was published two days prior to the last presidential elections, features people standing in line to vote, and seems to mirror an evolutionary chain whilst simultaneously implying that Egyptians never evolve, in a sense.

The identifying feature of all his works are their scale, and his figures seem to be ever in conversation with the real figures of the people who stand before them in exhibitions. The scale of his drawings forces the art to interact with reality in a very basic sense, which mirrors their commentary on reality.

"I want my work to be part of the people around it," Nasr says, "as though the people in the drawings are real people who are doing real things - like it's contemporary to the current reality. And people interact to the work differently."

Indeed, his drawings are distinctly life-sized, and while they are in black and white, they tend to have a sense of actual three-dimensionality and mass. Having studied sculpture at the School of Applied Arts, one can see the effects that his training plays in all his work, and how this informs much of his series.

"Sculpture, above all else, teaches you how to identify the mass of an object, because a painting is 2D, but sculpture is 3D, so sculpture helps you identify the hidden parts of the object."

You can find out more about Mina Nasr on his website.