Once famous for its instrument craftsmen and shops, musicians, and performance artists, Mohammed Ali Street seems to be losing its musical relevance. Most musicians have moved on and only a few craftsmen remain. Seif Bibars explores the iconic street to find out what remains of its rich history. 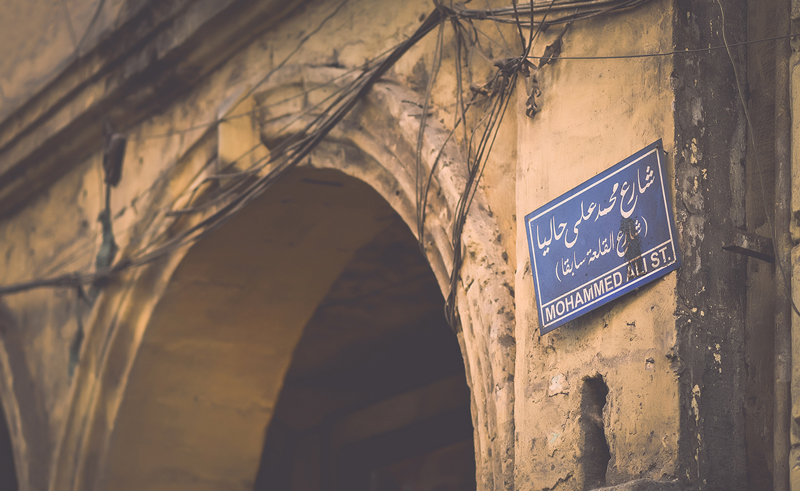 The street that was once adorned by French architecture and music shops is giving way to mobile phone stores, furniture shops, and modern high-rise buildings, making me question: why and when did Mohammed Ali Street lose its appeal to musicians and music lovers alike? Not long ago, Mohammed Ali Street was Cairo's cultural centre; musicians, belly dancers, painters, and poets all converged on it. It was Cairenes' go-to place for all musical needs; be it a percussion marching band or a string quartet, Mohammed Ali delivered all. A music store owner told me, "Up until 10 years ago, if you needed musicians or belly dancers you had to book a month in advance. We were working two or three orders a day and now we're lucky if we get two or three orders a month." One by one, the music shops are vanishing due to low business. With many music shops opening up all over the city, the long trip through Downtown's crowded streets is no longer necessary to find the instruments you're looking for, but for some items - like handmade instruments - Mohammed Ali still holds the monopoly. One of the oldest stores on the street opened in 1906 by Gamil George, a Syrian migrant who was one of the world's most famed oud manufacturers. Recently, the instrument shop closed down and a mobile phone shop opened in its place. George's oud workshop still operates, located in a hard-to-find dead-end alleyway in Mohammed Ali's back streets. The craftsmen that are running the workshop, churning out one oud at a time, are two master oud makers and a young apprentice - all that remain of George's legacy. Although not being of George's direct descendants, they are known as Adel and Ashraf George. Adel, a man in his 60s, has learned the craft from George and his sons; he has been in the business of making ouds for over 53 years. Ashraf has also been in the business for a long time - over 40 years - but not as long as Adel, who is now the oldest person in this business and considered to be one of the oldest instrument manufacturers in Mohammed Ali. Many others exist, but these two are the best, and the workshop they run now is in fact the same workshop that was run by Gamil George and his sons for over a 100 years. I spoke to the two craftsmen and asked them about the street's history, and the famous artists and artisans that came from here. When I first went looking for the workshop, people in the main street kept trying to have me believe that the shop didn't exist anymore and were insisting that whatever I needed, they could help me get. It wasn't until I explained that I was not there to buy instruments but to interview those two oud makers specifically that people started leading me to the shop. After a long walk through winding alleyways, I arrived at the location of the workshop. I could hear an old record by an Egyptian songstress that I could not identify coming from it. The workshop itself was littered with ouds in their many stages of manufacture, and each one of the two artisans and their young apprentice had a job to do. I approached slowly so as not to interrupt them - they looked so content working on their ouds. The sun was setting and, with the music playing in the background, I had a feeling that I found what I came looking for: a piece of the old Mohammed Ali.

The first thing I had to ask was about when the original French architecture started to disappear. Ashraf told me, "The street was all made of either French-style buildings with its signature arches that adorned the sidewalks, or older Mamluk-style buildings from an era before when Khedive Ismail built the new Mohammed Ali Street, previously known as Citadel street. It starts at the old Opera House (now Ataba Square), and goes all the way through Islamic Cairo ending at the Citadel." He continued, "Up until 25 years ago, the original architecture was not changed. But then one by one, the old buildings started to come down, giving way to the new high-rise buildings." I could only imagine how beautiful the street used to look compared to now, with rubbish piles on every corner, furniture workshops using the sidewalks as show space, and the disintegrating French buildings. Not long ago, many famous artists lived here, many of whom either moved out or passed away, including famous dancer/actress Lucy, actress Sabrine, the late internationally-renowned percussionist Khamees Henkish, and many others. I wondered why the George family left their store, the oldest business in the street. When I asked Adel, he told me, "They forfeited on the lease to the owner for a compensation because they weren't making as much money as they used to. This workshop and storage facility are what's left of Gamil's business. I am the last of Gamil's apprentices; the rest are dead or retired. We all used to run this workshop together, now they are all gone." "What happened to the original store?" I asked. "A mobile phone shop opened in its place," Adel answered, adding that "it's two blocks away from here back towards the main street. It's a shame, really; that store saw a lot of famous people come in to request one of Gamil's ouds."

Asking which famous musicians George had made ouds for, Ashraf replied, "All of the famous musicians' ouds were made here - Ryad El Sonbaty (Om Kalthoum's composer), Fareed El Atrash, Mohamed Abdel Wahab, Moharam Fouad, and Kassem Bey Ameen. All of them had many ouds made by Gamil himself and his sons after him." I was hoping that I could hold one of these historical instruments in my hands but, to my disappointment, the last one that had any historical significance was sold earlier this year. It wasn't made by George himself, but by another historical oud craftsman named El-Lethy; it was made in 1919 and sold for over 10,000 USD, or so I was told by Ashraf, the last owner of this historical instrument. Both of the old men working in the workshop had no wishes except to be able to make ouds. They no longer about the street since it has lost its original essence. The significant people left, none of the new generations are learning to play music so the musicians are dying out, and the craftsmen sell their ouds all over the world with more exporters buying from them than local shops. At the end of the day, they are not tied down to this place anymore since, all around them, everything that used to resemble something significant is disappearing. Even they themselves will be gone, and nothing will remain of the old street except the memories that live on through this story and many like it, of different accounts that happened in this once glorious musical and artistic epicentre.