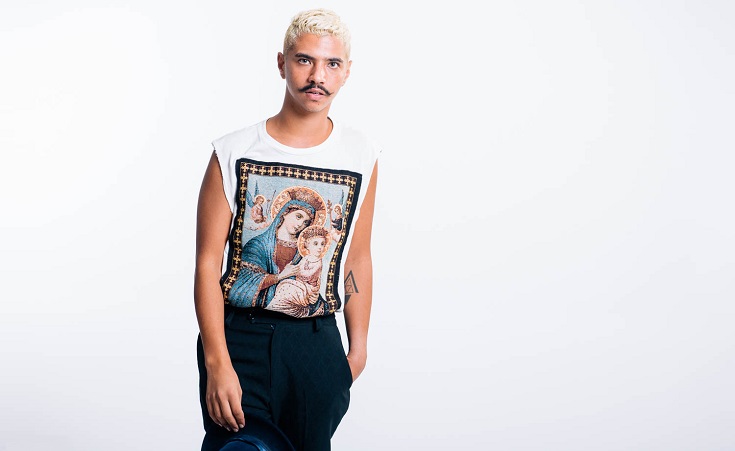 Mohanad Kojak is one of Egypt's youngest and most accomplished fashion designers, his beautiful creations attracted admirers even before he was on Project Runway Middle East. Mohanad's success and achievements, however, did little to protect him from cyber bullies. If anything, it has put even more focus on him, making him more susceptible to harassment.

In the latest act of cyber bullying targeting Kojak – and there has been many, a Twitter user posted a picture showing Kojak at a red carpet event, mockingly describing the way the young designer wore his hair as an "Indomie hairdo," implying that it resembled ramen noodles. Indomie's social media team on Twitter quickly replied, tweeting: "We don't know anything about him." While the internet has eased communication to an unprecedented level in history, giving every and anyone the right to learn and share their knowledge and opinions, it has also given those with less-than-perfect intentions enough room to inflict harm upon others. It is usually those who express their individuality who fall prey to such toxic behaviour.

Indomie's tweet went viral, with many users shunning it as unprofessional and insensitive. We reached out to Kojak, who revealed to us that he is currently in talks with Indomie Egypt, to get his take on the matter of his own victimisation.

"On the matter of the misjudgement and the unworthy statements made about my looks or choice of clothing, I pity people who have the time to judge such things, who have the energy, and patience to address someone else’s personal choices in such an unscrupulous manner. This behaviour is nothing less than cyber bullying.

I would ask myself, from time to time, 'does it get to me? Those comments from total strangers?' I would be lying if I said a hard ‘no’, but guess what? I have grown out of it, I found in my success a strength that gave me self-contentment that drives me beyond these matters. [...] Incidents like these used to bother me in the past, but what I began to realise is that it's never about me; those cyber bullies are threatened by success and individuality and anyone who doesn't conform to what they consider the norm."

What surprised me, as a professional, is Indomie’s response on Twitter, because it came from a brand, I guess brands worldwide have guidelines, don't they? [...] While I can't punish everyone who decides to misuse the internet by cyber bullying me, I can sure as hell hold a big company like Indomie responsible for such inflammatory remarks being tweeted on their official Twitter account.

I only wish I had the time and patience, like those cyber bullies, to fight back."