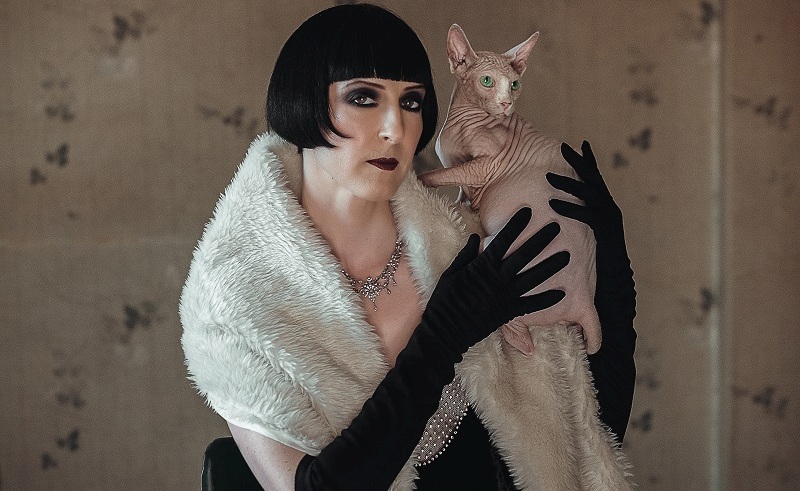 When faced with the dilemma of having to pick a location for her latest art project, in which she attempts to capture the allure of bygone times in a series of raw and captivating images, Egyptian photographer Mennatullah Hossam sought Downtown Cairo for inspiration. In a collaboration with Dakhli West El Balad, the first shoot-locations platform of its kind in Cairo, Hossam brought the renowned Egyptologist and fashionista, Professor Colleen Darnell, to the heart of the city for what would turn out to be a visual spectacle showcasing the professor's signature vintage fashion, juxtaposed with the locations' decayed walls and simple wallpapers. Oh, and she features a Sphinx cat as well, in case you weren't already ALL here for this.

"Dr. Darnell has a stunning wardrobe, which acted as the main inspiration for the project," said Hossam to CairoScene. "Many people suggested I do the shoot at the Pyramids, but I didn't want something so predictable and straight-forward. It would have been out of place. Downtown Cairo was definitely a better fit."

After endless prepping and scouting for the shoot, Hossam finally managed to get everyone, including the Darnell and Dakhli West El Balad, to buy into her vision and get on-board. We're glad they did because otherwise we would have never known how much of a natural poser Sphinx cats are. On that, finding the cat has proven to be Hossam's biggest challenge. After a prolonged search on social media and through people she knows, Hossam finally found one cat whose owner doesn't mind to put on display, but she was surprised for how rare such cats, which are believed to have originated in Egypt, are that rare to find in the country.

The subject of the photos, Professor Darnell, is a known American Egyptologist, and Yale graduate, teaching Egyptian art history at Naugatuck Valley Community College. A regular visitor to Egypt due to the nature of her work as an Egyptologist, Darnell has made several significant discoveries in Egypt, and her research papers have shed light on previously-unknown insights into the tactics used by Ancient Egypt's military under different rulers and eras. She's also, obviously, an acclaimed fashionista with a certain flair for early 20th century fashion. Basically she has it all, and we're living for it.