In collaboration with the Swiss Embassy and Pro Helvetia, three of Switzerland's and one of Egypt's finest street artists are injecting some art onto Cairo's walls. 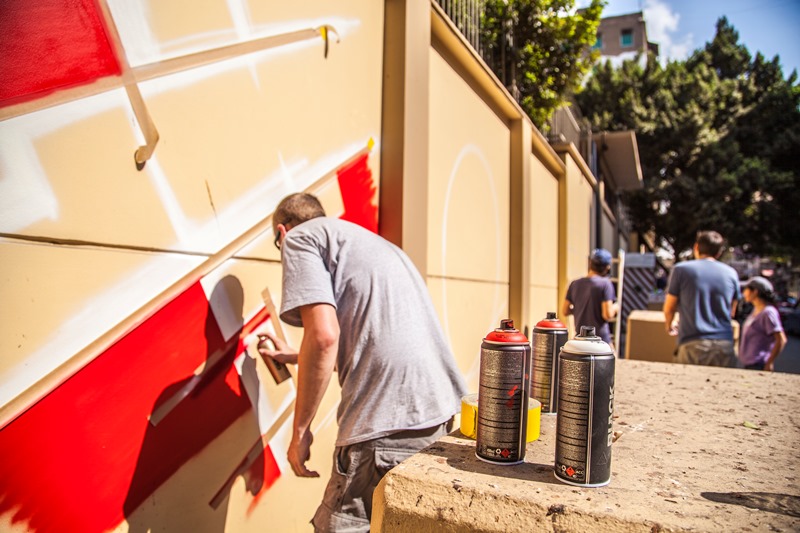 Taking over the streets and walls of downtown Cairo, the Swiss Embassy in Egypt and Pro Helvetia Cairo have teamed up with graffiti artists Nevercrew and Bustart from Switzerland and Mohamed Khaled from Egypt to spice things up during a six-day live art project which kicked off this morning. Entitled On Identity and Fingerprints the project’s aim is to cover the walls of the Swiss Embassy (10, Abdel Khalek Tharwat Street) with eye-catching and provocative art. “The cultural exchange among Swiss and Egyptian youth is an important feature of the Swiss Embassy’s work in Egypt. The graffiti project on our wall is a small, but tangible support to a thriving street art scene that is developing both countries,” says Markus Leitner, the Ambassador of Switzerland in Egypt.

Nevercrew is the brainchild of Swiss artists Pablo Togni and Christian Rebecchi, who gave life to their artistic duo in 1996, painting all over the south of Switzerland, and combining the spirit of murals, street art and graphics. Both attended the Art School in Lugano. Meanwhile, Bustart is a street artist from the Swiss city of Basel whose work has featured at international events in Munich, Bristol, and Amsterdam, including stencil art and stickers. Egypt’s own addition to the line up, Mohamed Khaled, is a multi-media artist who graduated from the faculty of fine arts but went on to dabble in film, comics and, of course, graffiti.

Having started this morning, the murals are just beginning to take shape. You can follow Pro Helvetia to keep up to date or, better yet, just head over to the Swiss Embassy and catch them in action!