Everything you need to know about the 31 Mosalsals coming to your screen this year. 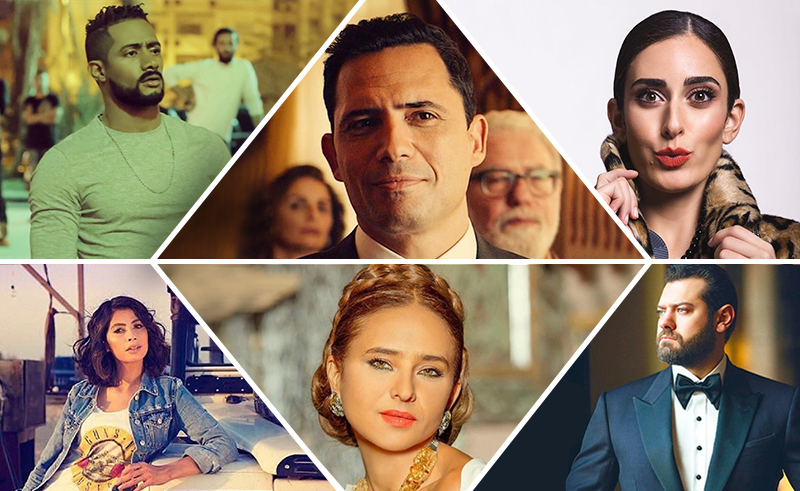 When it's Ramadan, life as we know it simply ceases to exist. For 30 days, we're given a free pass to stuff our faces with whatever we can get our hands on (from Maghrib onwards, of course), and get locked down in a room with that overly intrusive aunt at least once a week. More importantly, our binge-watching game gets taken to a whole new level with endless mega home-grown drama productions suddenly invading our lives; otherwise known as Mosalsalat. From what is playing to where and when to catch it, here are ALL the Ramadan Mosalsalat coming to your TV screen

What would Ramadan be without a Adel Emam Mosalsal? This year, Emam returns as a journalist who acquires confidential documents which include incriminating evidence on several big government officials. After taking the risk of publishing them, his life and safety are exposed to grave danger. Let's hope the rather cliche plot still manages to surprise us.

A popular and achieved armed officer from Upper Egypt, played by Mohamed Ramadan, gets relocated to Sinai amidst a violent insurgency against Islamic extremists. We'll take a wild guess and assume he'll end up killing them all and saving the day single-handedly.

Losing her son to a car accident, law consultant Mervat Mahran (Yosra) is faced with several obstacles following the case. Eventually accused in the murder of her own son, the consultant has to find a way to prove her innocence.

This drama-thriller starring Ahmed Ezz and Arwa Gouda is centered around the character of Abu Omar, an Egyptian lawyer who starts a peaceful association aiming to help those who are victimised by the corruption of the big-shot lawyers. Needless to say, this angers the authorities and they attempt to arrest him before he flees to Paris before eventually settling in Sudan with his son (whose name is Omar, obviously) and he ends up joining a secret jihadist group.

The husband of a Russia-based Egyptian professor goes missing without prior notice. She boards a flight to Cairo and begins to retrace his steps in vain hope she could find him. Things get complicated along the way.

31 years after their last collaboration, Yehia El-Fakharny and Mervat Amin make their comeback as an acting duo in this new comedy production. The plot revolves around an ex-diplomat who decides to pursue his passion for cooking at his own touristic village upon retiring. If El-Fakharany's unrivaled record is taken into consideration, this will be one mosalsal to keep an eye on.

The charming Syrian star Sulaf Fawakherji makes a return to Egyptian drama in the role of a nurse working at a rehabilitation facility which specialises in caring for suicidal cases, where she ends up getting wrongly accused of murder.

Dedd Maghoul (Against The Unknown)

A middle-class bank employee gets divorced because of how demanding her job is. After her ex-husband takes her daughter away and prohibits them from seeing each other, the daughter then lands in trouble after she gets raped and her mother embarks on a hunt for the criminal.

Layali Eugine (The Nights of Eugine)

Dhafer L'abidine and Amina Khalil are starring on the same show this Ramadan - is there anything more to say? FINE, if you must know, the screen-play is an Egyptianised version, set in the 1940s, of the events of a Spanish novel titled Eugenie De Monte Cottessa, which is the story of a Spanish-born woman who became the empress of France centuries ago.

Season 2 of the hit series from 2017 hits our screens this Ramadan once more. Amir Karara plays the role of a police officer who keeps finding himself in hot-water as part of his daily job. Will it live up to the massive popularity from last year?

Showing On: On E, Channel 1

An Alexandria native relocates to Cairo, along with her best friend, seeking fame and stardom after suffering a tragic life. A series of flashbacks take them to a certain incident which took place at a hostel they once lived in. The events of the tragic night slowly unfold.

BREAKING NEWS: Moustafa Sha'ban is not marrying more than one woman this Ramadan. Instead, he's playing the role of a bank employee who gets wrongly accused of corruption and has to face a fierce battle to clear his name.

The plot is centered around the character of a girl who can forsee the future through her dreams. Like, she actually dreams of future events before they occur. Too spooky for Ramadan? Mai Ezz-El Din thinks not.

Showing On: ON E

A medicine-graduate, portrayed by Amr Youssef, gets tangled up in a messy artefact-smuggling scandal. But does he proves his innocence?

Yes, the name is familiar for a reason. This is a mosalsal remake of Fouad El-Mohandes's masterpiece Ard El Nefaq, which revolves around a working-class man who finds a secret store selling pills which amplify certain aspects of his personality when consumed. And so it begins.

A corrupt businessman who has built a fortune from illegal trades falls head over heels for a university professor - a recipe for disaster.

Showing On: CBC and on E

An action-drama that focused a counter-terrorism police officer who's assigned a new case. But it proves to be a complicated, even deadly, one to solve.

Hany Salama returns to the silver screen in the character of a convict who manages to escape prison. He then plots to take revenge on the one woman he's ever loved.

A group of mentally-troubled individuals end up in the Cairo-bound flight 707. After taking off from Beirut, the group, which have never met before, begin showing their true colours and the drama ensues.

Ok, we don't know much about this one yet, well except that Haifa Wehbe plays the role of a con-artist. But as habit goes, the character will probably be called Karma and there will be a bunch of men who want to take advantage of her. It's also quite possible (still guessing) that she'll end up out-maneuvering them and accumulate immense wealth somehow. You go Karma!

A mechanic falls in love with his boss's daughter and plans to propose before he gets in a tragic accident that changes everything.

Two BFFs, both of whom come from modest backgrounds, are trying to excel in their careers and make it big. Fate choses otherwise.

Sukk Ala Ekhwatak (Lock Up Your Sisters)

Nothing is yet known on the plot of this mosalsal, but given its name, we'll go out on a limb and guess it's about a controlling brother with lots-o-sisters?

Part 2 of the family-drama sees the businessman Hamam, played by Gamal Soliman, become embroiled in an affair with a maid which his wife hired out of sympathy. All the while his business affairs get real messy. There's a lot to live up to in this sequel considering that part one, which was released in 2009, met huge praise.

This drama-thriller examines a number of social issues concerning youth; issues which eventually lead to poverty, disenfranchisement, and terrorism.

Yup, you guessed that right, it's a comedy. Amy Samir Ghanem returns as part of a mob, along with her husband, and they go through endless 'comedic' situations as police attempts to catch them in the act.

The plot of this Mosalsal is yet to be made public. But seeing as Akram Hosny is famously known for the character of Abu Hafiza, we'll assume it's a comedy until told otherwise.

In this drama series, a young Egyptian and her cousin are at a wedding when a bomb detonates. One of the girls dies while the other one handles her loss by chanelling the other's personality as anxiety and stress ensue.

30 leila w leila is a light comedy poking fun at the societal issues of the country.

Another comedy revolving around a clumsy cop and his quest in catching the country's trouble makers.

The rosaries are not only there to satiate your spiritual needs, they're perfectly [...]
Week Month Year