Iranian artist Shirin Neshat has caused waves in the international art scene with her latest exhibition, focusing on the horrors, losses and tragedies of Egypt's revolution... 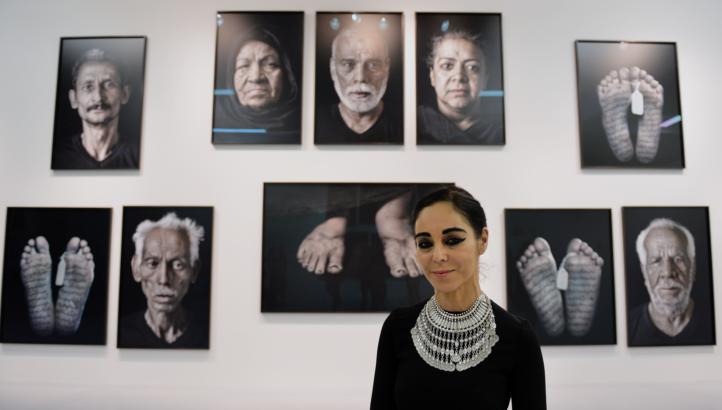 Whilst the optimistic and politically foresighted insist the revolution in 2011 was a success in so far as it laid the foundations for a democratic upheaval that is still in the works, there are those realists among us focusing on the immediate failures: a year of socio-economic decline under the dogmatic rule of the Brotherhood, the countless deaths and what now seems a return to the violent police state with the overlord known as Sisi. One thing all can agree on is that art has certainly blossomed from the cataclysmic powers of the rebellion.Iranian visual artist and director Shirin Neshat's new photography exhibition in New York concentrates on the latter; the brutal aftermath and shattered hopes of a nation.

Her exhibition Our House is on Fire commissioned by the Rauschenberg Foundation and on show at Gladstone Gallery, New York, explores the consequences of the revolution through the eyes of loved ones that were left behind by their victims. The project came about whilst she was filming a documentary in Egypt about the legendary Egyptian singer Om Kalthoum and she became immersed in the Arab Spring. "I just thought it’d be really interesting to do a project in Egypt for a few reasons. One, Rauschenberg as an artist has a history of advocacy and Egypt itself has been deeply problematic in poverty and issues of women and children. It also happened to be in the aftermath of the revolution and you really felt an incredible sense of defeat among Egyptians. After all that euphoric energy of the revolution, I thought we could do something," Nishast told The Washington Post.

The photographs coupled with indecipherable calligraphy put a face to the mourning that still consumes the country, three years after the revolution. The subjects were asked to think of a tragedy that had occurred to them whilst being shot. The exhibition reflects an inevitable ingredient of the human condition: “When a revolution starts there is something euphoric and contagious about it,” explained the artist to W Magazine. “No one thinks about the human cost and that’s the story I wanted to share, the grief that connects the victims and the victors.”

The sale of two of the limited edition photographs which are expected to raise thousands of dollars will be donated to an an as-yet unnamed human rights organisation in Egypt.