Renowned filmmaker Sherif Nakhla just premiered his documentary of the same name on legendary band Les Petits Chat, who were an Egyptian cult sensation in the 60s. We speak to the man behind the movie to find out more about inspiration, band dynamic, and the golden age of music in Egypt... 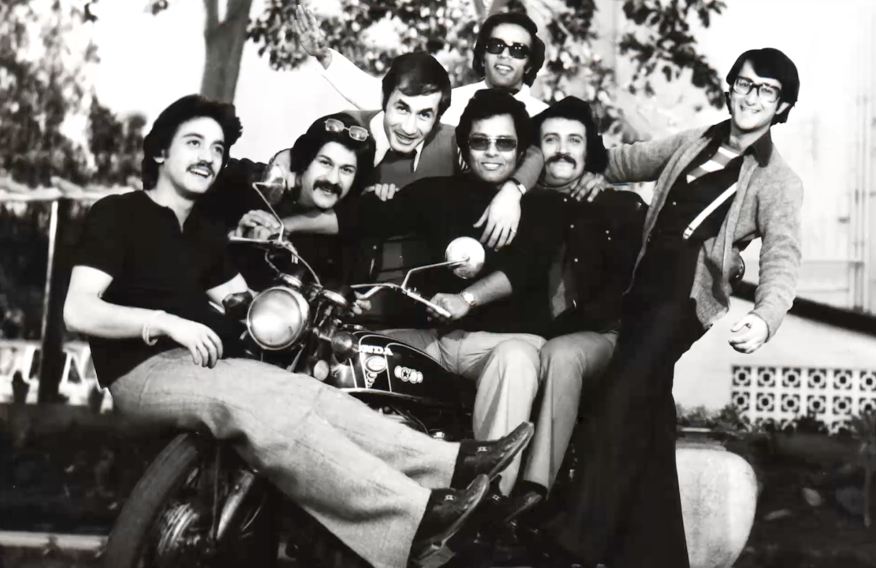 We had a chance to speak to Sherif Nakhla post releasing the trailer of his new film Les Petits Chats and before the premier of the documentary at the Arabian Sights Film Festival in Washington, which will open with the film. Les Petits Chats follows the past, present and future of Egypt’s influential cover band that, despite being a cover band, took the region by storm in the golden era of the 60s and 70s with their flawless renditions of some of the most notable western hits, along with a captivating charisma and class which you wouldn’t come across in today’s music industry; a charm which stood out even back in the day and before the decline of Egyptian society. Nakhla will also be joining the Arab film-making panel on the 24th of October, at the closing of the festival as the documentary is nominated for the Jury Prize. Les Petits Chats was produced by Nakhla, Middlewest Films and MAD Solutions who are taking part in the release of a multimedia book about the film which will include 80 pages of pictures, info about the band, a CD and a DVD of the film Les Petits Chats. What inspired you to produce a Les Petits Chats documentary?

It all started when I was a kid looking at old photo albums of Egypt in the 60s and of people dancing at a concert by the beach. When I would ask where these pictures where taken my parents would say, "Alexandria, and the band wearing eccentric suits are called Les Petits Chats". It didn't makes sense to me; that public and setting looked nothing like the Alexandria I knew and neither did the energy of the people in those photos. I began dropping the name Les Petits Chats to my friends’ parents and I would watch their faces glow with joy as if I had just cast a spell on them. It was like a game I played with the parents and it worked every time without exception.

Later I found out they were a cover band with no original songs to their name, so I was puzzled. How could a cover band have such an impact on a whole generation of Egyptians? When I became a journalist and filmmaker I revisited the subject and asked deeper questions and it became clear to me that they were more than just a band, their fame even surpassed the songs they sang. They represented the romantic spirit of that golden era of Egypt in the late 60s and 70s. The idea of making a documentary about them was definitely on my mind but I didn't want to make a film that told their story without any performances. I was amazed by their story and its effect on the band members who later became celebrities like Omar Khayrat, Ezzat Abu Ouf, Hani Shinouda, Talaat Zein, Omar Khorshid, Sobhi Bedair and of course Wagdi Francis, but I still didn't hear what they sounded like. I didn't want to make a film that just talked the talk. I wanted to make a rockumentary, and not a basic documentary.

In 2009, I found out that they were going to attempt to do a reunion concert with the early lineup of the band. I immediately jumped at the opportunity to embark on this musical journey with them and finally hear what they sounded like and to see for myself if they could walk the walk as I filmed them daily at their rehearsals. It was to my great fortune that I managed to get my hands on a Les Petits Chats live recording from 1971. I had the music, a story and characters to follow and that's all I needed to make this film. Now I had a chance to see what the fuss was all about and maybe I would be able to capture it and frame it so that it’s available for everyone at any time. I guess I was looking for the romantic spirit of Egypt and then I wanted to spread it. Egypt's culture could definitely use a little of that.

Are you personally related to any of the members?

But of course! Wagdi Francis is my godfather but in no way is that mentioned in the film or used for dramatic purposes. That's too personal and unnecessary in terms of telling their story within the film - their story is dramatic enough without throwing my personal perspective in it. Actually the film has no narration from my part. It's all just them.

Who took part in making the documentary happen?

It was just me during the first two years then my co-producer Wael Omar (Middle West Films) came on board and supported me greatly. But regarding the filmmaking; editing, shooting and directing it's safe to call it a one-man-show and it is that which gives the film such a personal atmosphere. A friend, Hani Eskander helped shoot many of the interviews. Then there were the rest of my friends who have seen the film evolve during the past six years; their feedback was always helpful and pushed me to keep making it better. And of course the team at Middle West Films who have also made this film their own and worked a great deal on it as well as the team at MAD Solutions who have had a large part to play regarding the publicity and the upcoming multi-media book. What was the experience like, filming and interviewing the band members? Any significant moments?

It was an experience full of hope, love, and music. What more could you ask for? Significant moments? Well, you'll have to watch the movie for that one, there was a moment where they all started to laugh and swear at each other like teenagers. I ended up using it in the film!

What would you like to bring to the modern film industry and Egyptian culture through this documentary?

Well any (modern) old story is nostalgic especially when the past is so different from our present, but Les Petits Chats's story continues; the plot takes place in modern times. I would love it if this film manages to encourage bands and artists to follow their dreams and aim higher and not to be discouraged by the current state of our culture and society. Les Petits Chats emerged from a very difficult time in Egypt, a time of war and despair but it only made them stronger as a team. Where there is a will there is a way - cliché but true.

How do you feel about the music scene now in comparison to back then?

The music is scene is getting better and better with a handful of famous bands taking the stage with confidence, but it is simply unfair to compare it to the days of Les Petits Chats and The Black Coats… Egypt was at a better place culturally and by all means. The public was interested and more open minded as they would go to their concerts on a weekly basis with crowds of 5000 people, women could dance on their own and dressed as they pleased… You simply can't compare. But musically, perhaps some of the famous bands we see today could produce the next Omar Khayrat or Sobhi Bedair, Hani Shinouda or Omar Khorshid - anything is possible as long as they all keep aiming higher and not settle artistically when they achieve a feeling of "stardom". What do you feel lacks in the Egyptian film industry and how would such a documentary contribute to that?

The industry perhaps has been focusing more on the superficial side of life, and honestly it's quite ridiculous at times. But maybe that's simply what the people want to see; it's almost like a chicken/egg situation. I would be happy to see more films that are more down to earth in general but I honestly believe that the worst phase is behind us and the film industry now will just keep getting better and better with a larger variety of films to choose from in terms of content and standard.