Using performers both with and without disabilities, defying odds and stereotypes embedded in our culture, the Stopgap Dance Company comes to Egypt as part of DCAF 2016. 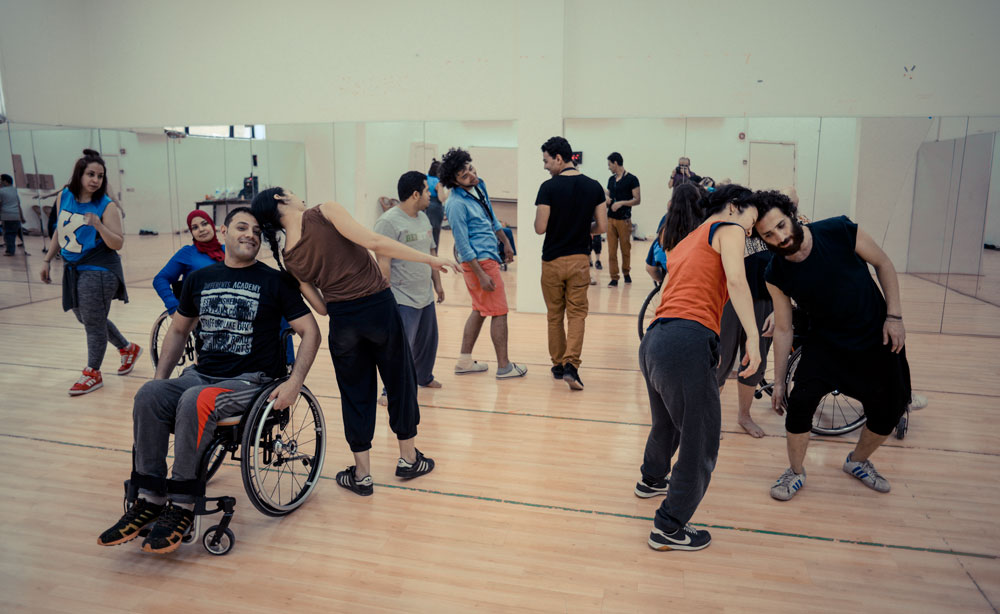 When I first met Aya Kobayashi and Anna Pearce of the Stopgap Dance Company, I accidentally interrupted a rehearsal at The Greek Campus. The two choreographers and their company of performers were gathered in a circle around the perimeter of the small gymnasium. Each member of the circle pointed at another with palms pressed together and a loud karate-esque “Wah!” It looked like a blast. The entire crew was all smiles and anticipatory looks as they anxiously awaited their turn.
“That’s the 'Wah!’ game,” Pearce tells me later, after I’ve returned for our interview. Mine is the last of many; a camera crew and someone who looks like a real journalist were just finishing up when I arrived. “Oh, there’s no camera?” Kobayashi says as they both flop onto the floor. They've both been hard at work bringing their performance, entitled Gaze, to life alongside their integrated dance troupe. When asked about the meaning of the work's title, Pearce, who has worked with Stopgap for almost 15 years, elucidates, "the name of the piece comes from our experience of coming to a completely new place – about considering how we look at things and how we absorb our surroundings, and how we see other people and the place that we’re in. Then how we communicate that." Kobayashi, a Japanese citizen living in the UK for some years, expands on the idea, saying, "It's very much about how you see things. Maybe it’s about what's inside, maybe about what’s outside. There are many layers of communication. We say 'see' but when you say 'see' there are more things included. When you say 'gaze', there is so much attitude involved." This performance, especially since it is outdoors, focuses on the ways that you see another body moving in space – to be mindful of its motion and the relation it, and you, have to the environment. Kobayashi and Pearce hope spectators will become more mindful of their surroundings and the people they share them with. "It's going to be interesting to see it on the street,” Pearce says as she and Kobayashi share the same enormous smile.
The dancers – 11 in total – are the real stars of the show. Before joining D-Caf and Stopgap, they were a pre-existing group that entailed a combination of dancers working as part of the contemporary and hip hop dance scene in Cairo. As part of the integrated cadre, there are two young people with Down Syndrome who come from an organisation called Zayee Zayak, as well as four wheelchair users who were also invited to be a part of the project. Working with the theme they created, they started from scratch to create a 15-minute routine. “That's a lot of minutes for just nine days,” Pearce adds with a tired grin. The main inspiration for the work they’ve done doesn’t come from any traditional source, though; they both explain it came from the people they’ve worked with and the way they respond to them and to each other. "Every morning we held a class that was an hour and half, just so we could see their physicality – what they’re good at, what they need to practice – slowly kind of turning into performance and practice,” Kobayashi describes the first few days. "We prepared some tasks to generate some movement, slowly creating little sections – a little improvisation, finding things that worked and asking them to do it again, maintaining focus or changing focus, guiding them to capture and craft their work.” Soon the performers began to take ownership of their work and began to work together as a company of dancers.
As with most performers, there is an adjustment period when working with a new group. Pearce explains the difficulty some of them had in acclimating to their roles and to each other: “Less so than I expected. From the beginning they’ve been extremely open and generous, prepared to try stuff that we ask of them. And that’s grown even more so since the beginning of the project.” Kobayashi adds, "Something about it is very much less egoistic. I don’t know how to describe it. When we show an idea they really know it and do it.” The two choreographers work with this energy, using it as inspiration. “There is a practice Stopgap has developed over a number of years, a way of approaching this kind of creative work. In this environment I would think of those as starting points and ways in. The way it has grown has really come from the individuals in this room,” Pearce says, beaming with pride. Having both worked in many different places around the world, they explain that it is never the same in two places. Kobayashi uses a cooking metaphor; "We do this a lot but every place is different because each ingredient is different. I think that’s what we are trying to do more: really use the different materials, different people. I always use the example of cooking; if you have a good tomato you have to use it!"
Stopgap itself is one of the leading integrated dance companies in the UK. Using professional performers with and without disabilities, they tour the UK and internationally, doing both theatre and outdoor dance work. They have two youth dance companies – an apprentice company, under the Stopgap umbrella, as well as lots of wider education work. This allows performers to progress through the different levels of the Stopgap family. "Beginning as part of the youth company and being mentored and trained as a young disabled dancer – whether that be a learning difficulty or a physical disability, or both – many people have progressed to become part of the core team of professional performers,” Pearce explains. "It's a big family." When asked about Egypt, the two dance-masters beam,."The people that we’ve met are so open, and generous, and hospitable. They’ve taken care of us so well,” Pearce says with grateful humility. "I feel really privileged to have experienced the people here, amongst what someone’s expectations of what an experience in Egypt might be. To meet the incredible individuals at the core of that, I feel extremely privileged."
Kobayashi agrees, then begins to tear up as she says, "The personal experiences that sometimes people share with us about what happened to them during the revolution times – those stories will stay with me and it is a real pleasure to see them working through it."
With the people they’ve worked so hard with, sharing with them the myriad of struggles that they’ve experienced, the two are even more amazed at the dedication and strength exemplified by the performers of Gaze.
You can check out more performances at D-CAF on their Facebook page here.
Shoot by @MO4Network's #MO4Productions.
Photography by Ahmed Najeeb.