We Went To See An Independent Play in Cairo, And Now Believe The Theatre Is Still Alive

We sent our resident art nerd to The AUC Falaki theatre. And this is what she reported back. *spoiler alert* 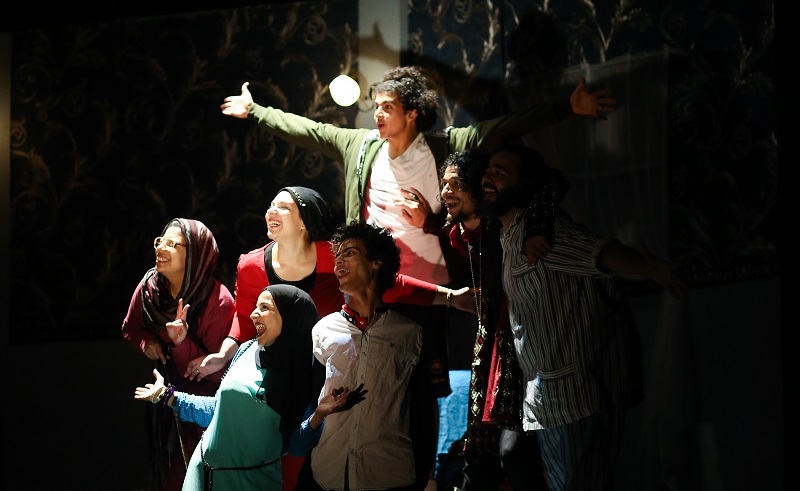 Theater is mankind’s oldest pastime. It’s said that cavemen used to perform for each other using fire for spotlights and cave drawings for backdrops. The ancient Egyptians, Greeks, and Romans all had regular performances and shows as part of their civilisation and some even incorporated theatre as gods in their mythology.

As history moved forward so did theatre. After the age of scientific discovery, when the performance arts stopped being a religious practice and became a cultural one, which allowed the likes of Oscar Wilde and Lawrence Graver to flourish and bring us some of literature’s greatest masterpieces. Plays like William Shakespeare’s ‘King Lear’ and ‘The Merchant of Venice’ have introduced characters so iconic that they still bring audiences to tears till this day, but none of Shakespeare’s characters were as iconic as Hamlet. ‘The Tragedy of Hamlet, the Prince of Denmark’ has a general theme of sorrow and misery, it was quite interesting to see what 3alam Mowazy (Parallel Universe,) Cairo’s newest independent theatre company, was going to do with this infamous character and how they were going to use his tragic story as an element in a comedy in their first play, The Danish Experience. Going into the play, I knew two things for a fact.

Both facts worried me. Producing a play is a huge challenge; for a production to succeed, everything has to be perfect. The lighting, the set, the music, were all as important as the script and the acting, and to my knowledge, almost the entire team was inexperienced. I'm pleased to report: I wasn’t disappointed. I arrived early enough to see the crew setting up the stage and they were all dedicated professionals who obviously knew what they were doing. The entire play was set in an adorable little living room that put Ikea’s catalogues to shame. Looking around the theatre as it filled up with people, there was one thing everyone had in common: we didn’t know what to expect.

The play started out with Karim, the play’s protagonist, and his family in their living room where the main conflict is introduced. Karim wants to be an actor, but his father wants him to finish college and get a job; an Egyptian tale as old as time. It was only two or three minutes into the play when cast had the entire audience laughing themselves out of their chairs and they didn’t stop all the way through. *SPOILER* In the play, Karim auditions for a part in his University production of Hamlet and is given the leading role, which led his father to kicking him out of the house and swearing it would be his final performance. The conflict between the protagonist and his father, much like the one between Hamlet and his stepfather, sent Karim into an emotional trauma, which would be the one-hour traffic of their stage (that’s a Shakespeare joke). The lead actor is diagnosed with a rare disease that has him believing he is actually the tragic Prince of Denmark and the only way to cure him is for the entire family, including the father that kicked him out and caused the trauma in the first place, to act out the rest of Shakespeare’s script. The events of the play, paired with a dedicated cast, and a hilarious script, made for quite the emotional roller coaster. The performance was funny, engaging, heart wrenching and slightly political, and had us laughing our asses off and at times close to tears. The play, though it was comedic, had me questioning what i thought about people, passion and parenting and at one point had me asking hamlet's infamous question "to be or not to be?" Throughout the entire play every stereotype about Egyptians, including the protective parents, the arranged marriage, and the over friendly bawab, was portrayed but it was done in such a subtle way that it wasn’t received as a cliché but more as genuine compliment to people everywhere. It was easy to tell that the actors were amateurs, not because they were bad, no the contrary, because it was obvious how eager they were to put on a great performance. The Danish Experience is defiantly worth your time, and I personally can’t wait to see what 3alam Mowazy come up with next. You can see the play from the 19th to the 23rd of September at the AUC Falaki Theatre. Don’t miss this spectacular performance.