A master painter and an eccentric character, Vranas Georgiadhis never fails to turn heads. But it is his subjects that are the most interesting, as the realist focuses on the average people on the street, shedding a light on what's often ignored. 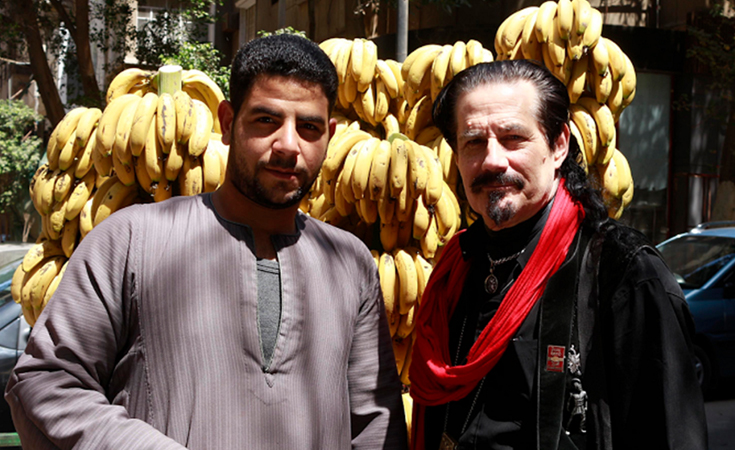 The streets of Zamalek have been home to a man who has drawn attention by his dark clothing, raven hair and numerous rings on every finger: Vranas Georgiadhis’ appearance is a contrast to the many residents of the island and one look suffices to know that the man has a story to tell. The story we hear when we met him exceeds anecdotes of the many places Georgiadhis has traveled to. In his own words, this story is one of the simple and traditional people of Egypt who are the subject of all of his paintings. We sat down with the Greek artist to find out what an individual who has seen the world, painting dancers in Bali and children in Hong Kong, is looking to find in Egypt, and how his work tells the story of the people Egypt fails most to see.

People are quick to judge Georgiadhis by his appearance because there are few others that look like him on the streets of Cairo. In fact, there are few people who look like him on the planet. The reality, however, is that Georgiadhis does not draw attention by his appearance only; it is his expression in a very different nature that he is known for. Having been a painter for 51 years now, Georgiadhis is a master of his skill, a man that has devoted his life to becoming a true craftsman and a person that is out there to preserve the history of the people in oil paintings. His subjects: the “people of the streets” who Georgiadhis has labeled as The Forgotten.

The desire to capture The Forgotten has brought Georgiadhis from America's East Coast to California, from Ireland to Hong Kong and from Cairo to Aswan, where he lived for over two years to meet, get to know, and immortalise the struggles of the street people of Upper Egypt. His pictures show people around the world in their traditional dress. Amongst dancers and landscapes, Georgiadhis painted the homeless and struggling. He shows us one of his paintings depicting a young son of a vendor in a souk. “The boy is thinking that he will never leave the market or go to school,” Georgiadhis tells us. To tell the story of the boy, Georgiadhis does not need words. The paint on his brush captures him, his everyday life and his inner struggles that will likely persist way past the day the painting dries and finds a new home with some art lover.

“People ask me why they should buy art depicting poor people,” Georgiadhis says while showing us numerous pictures of the street people of the world. “We are talking about 80% of the Egyptian population; why wouldn’t I depict them? For the purpose of truth, I have to paint the people of the streets.” There are Nubians and Copts conversing over a shisha, veiled girls with expressive eyes and women selling bread in his artworks. They are part of life in Egypt as much as anyone else is. While walking through Zamalek, Georgiadhis points out one of his subjects. The man is collecting garbage in Zamalek every day and greets Georgiadhis from the distance. “This man has an incredible face and a truthful story,” the artists says, “but nobody tells his story.” Vranas Georgiadhis does…

In every country he’s been, Georgiadhis says he has found different people, all trying to increasingly look the same. He shows us a picture of a traditionally clothed Greek from Crete he painted over a decade ago. “If I went back today, I would not find this image anymore.” Georgiadhis managed to preserve the moment, the time and the culture. And that is exactly why he chose Egypt for the last few years. “In Egypt, it is relatively easy to find the people of the streets,” he says, mentioning that the desire for Egyptians to all look the same has not been as overwhelming as other countries. Georgiadhis calls it the “uniformity of modernity” or the endeavor by people to abandon culture and tradition and merge into one way of appearance. In Egypt, traditional culture is still visible, although Georgiadhis expects increasing modernity to take this reality away. As a result, the “forgotten” people of Egypt are the perfect subjects for Georgiadhis.

On his personal style, Georgiadhis insists is not trying to make a statement, although it may seem so. The countless rings on his fingers are tokens of friendship people have passed to him along the way. In Aswan, he says, he regurlarly dressed in a galabeya to fit in. However, Georgiadhis’ style suggests that he is in fact a walking memory. He shows us a belly dancing belt around his hips that was a gift from a friend in Turkey, and a broche from Nazi-Germany an Austrian friend had bestowed on him when he believed Georgiadhis had mastered his craft. To remind himself of the extraordinary people that have enriched his life, Georgiadhis just chooses to take these tokens of affection along, and does not bother that they alter his appearance in a way where he doesn’t blend in anymore at all. Unlike his subjects, Georgiadhis stands out, both through his appearance and the stories he tells.

His fascination with Egypt and the endeavor to change the Egyptian art scene has not been fully fulfilled, however. Starting May 2nd, Georgiadhis will start teaching a class at Sane Art Center where he gets up close with up-and-coming realist painters who are hoping to learn from his half century-long experience. The lack of realist painters in Egypt Georgiadhis attributes with the lack of practice of artistic anatomy. Nude models are haram, so Egyptians seldom learn how to paint bodies correctly. In three hour classes running on Wednesdays and Fridays, people can help Georgiadhis revive realism in Egypt, even without the presence of a nude model.

In the end, Georgiadhis says, to do anything well in life, one has to become a master of their craft and that is exactly what he intends to do. He quotes Vincent van Gogh who said “if you are the master of one thing, you will add many things into the bargain.” As a result, Georgiadhis gets to choose his subjects nowadays. Today, it’s about the story behind the person, not the improvement of skills. Having painted his entire life, Georgiadhis is now preparing for his biggest and possibly last series which will depict the passion of the Christ, based on the wounds that are believed to have been on Jesus’ body according to the Shroud of Turin. Therefore, his interpretation of the passion will be the first one with forensically accurate wounds who are believed to have been inflicted on Jesus, based on the famous relic. Georgiadhis continues to grow artistically and spiritually, and he chooses Cairo, its people, and their incredible stories of the struggles to survive and prosper as the subject of his canvases.