The Nile Project And The Blueprint To A Nile Basin Sound

Ahead of their much anticipated performance tonight, we speak to The Nile Project, who continue to gather musicians from countries neighbouring the iconic river to forge a new sound, as well as school programs, that will create a cultural and musical identity the entire Nile Basin can share. 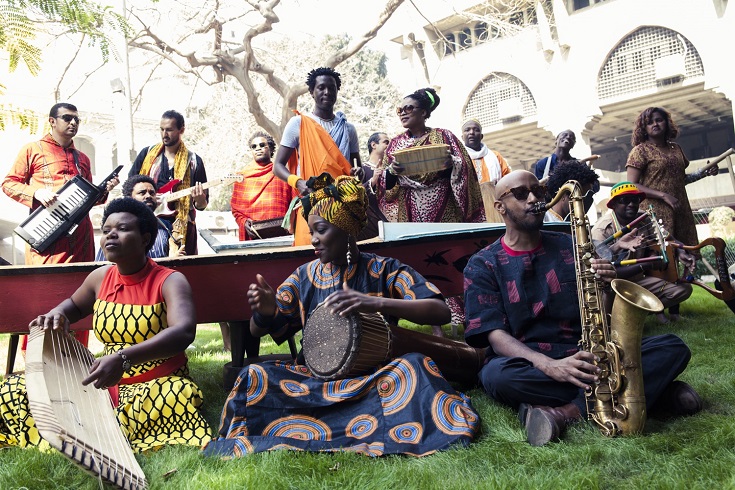 Egypt lays claim to a Nile that provides life to 11 countries with distinct cultural differences and a need to access water; a Nile that’s regarded as the longest river in the world. Egypt continues to try and protect its monopoly of developing Nile projects, which remains contested by neighbouring nations. At a time of political division returns The Nile Project, a gathering of eclectic artists that all live in different Nile-containing nations, proving that not only is music powerful in unifying people, it’s also borderless. Ahead of their show in Cairo, I decided to sit down with CEO and President of The Nile Project, Mina Girgis, to learn about how this project hopes to develop and nourish a collaborative ecosystem that will do more than forge new sounds.

Surprisingly, the inspiration for The Nile Project didn’t come to Mina Girgis in Africa, but rather in America. Acquiring a Master’s Degree in Ethnomusicology from the University of Santa Barbara, Girgis found passion in cross-cultural education through the emersion and sharing of cultural music. “Cultural understanding happens when musical understanding accompanies it,” explains Girgis. “I like to explore how musical curiosity instigates cultural curiosity.” Living in San Francisco, Girgis was working at a school he started, named Zambaleta World Music School, which focuses on creating a hospitable environment in which to learn and share cultural music. According to Girgis, “Zambaleta is an Egyptian colloquial word that defines spontaneous cacophony, like a street party or fight; the sounds that are somewhere in the grey area between noise and music that entices people to get involved. So, when Egypt had a revolution, I had to come back and see the real zambaleta in Tahrir square,” Girgis passionately expressed.

Upon arrival, Girgis immediately wanted to participate and find a way to use his skills, but quickly realised that there was little need for ethnomusicologists amidst the actual chaos. Returning to the States, Girgis was invited by a friend to check out an Ethiopian Funk band, Dego Band, in Oakland. “When I checked out the band I thought it was incredibly interesting, and started thinking, ‘why haven’t I heard this sound growing up in Egypt? They are Nile neighbours, and yet I’m hearing them in San Francisco…’” a baffled Girgis describes. It was at that show that Girgis realised that “there’s this level of cultural isolation happening in the Nile basin, because we are on the periphery of world music, where musicians look to tour in Europe or the States, but don’t play in neighbouring countries. The growing water conflict between Egypt and Ethiopia has been around for over a century, so we wanted to try to gather our Nile neighbours outside of a geopolitical argument and instigate people to want to learn about each other’s cultures through the sharing and creating of music.”

The first organised gathering took place in January 2013, and managed to bring together a collective of musicians from various parts of the Nile to learn from one another’s sounds and styles in an attempt to create their own unique-sounding set in a matter of two weeks, and record the live performance. According to Girgis, ‘What we’re doing with The Nile Project is trying to tell a story that’s never been told about the cultural identity of the people – often referred to as the cradle of human life – who have lived around the oldest river in the world and allowed their cultural connections get lost over thousands of years.” The first concert was an overwhelming success, and the live recording, entitled ASWAN, quickly spanned the globe, setting The Nile Project out on two African tours and a four-month U.S. tour. During their exponential rise, the collective also grew to feature 34 musicians from 11 countries.

Coming together for their fourth gathering, The Nile Project has made a few changes, but is once again driven to forge a sound that will relinquish the meaningless label of ‘world music’, and become synonymous with Nile Basin music. “This year, we are excited to invite Danny Mekonnen [of the Dego Band] as our new Musical Director, as well as eight new artists from Burundi, Egypt, Ethiopia, Kenya, Sudan, and Tanzania,” explains Girgis.

Coming together for two weeks in Aswan to create a new collection of Nile Basin music, The Nile Project is in the middle of an African tour and plans to release its third album, entitled Tana, in 2017. Expanding beyond releasing albums, Girgis highlights: "we are also using this tour to launch our university programs.” Looking to create more than just a musical blueprint for others to follow and expand, The Nile Project is holding a series of workshops aimed at engaging students to acquire a better understanding of the social, cultural, and environmental dimensions of Nile sustainability. By participating, attendees will learn about The Nile Project’s fellowships – a yearlong program for 24 student leaders at universities in Egypt, Ethiopia, Kenya, Tanzania, and Uganda.

Arriving at the GrEEK Campus, the impressive collective of colourful musical troubadours dazzled everyone on campus with their spontaneous and infectious sounds. It was mind-blowing to see instruments reminiscent of the images of instruments in ancient Egyptian hieroglyphics come to life. The tones and use of space atop a bed of interesting polyrhythms was unlike any ‘world music’ I’ve ever heard, and deserves to not be pigeonholed by a genre label that fails to acknowledge the cultural identity of this exciting collaboration of Nile neighbours.

For more information on The Nile Project and the amazing people involved, click here.

For information about their show tonight at Nacelle, click here. 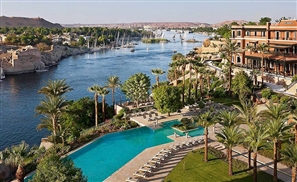 Egypt takes the lead on a project to connect 10 African countries with a Nile [...] 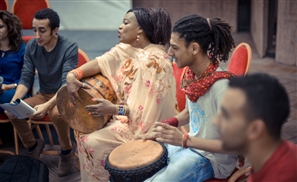 The Tale of The Clouds and The Nile: The Nile Choir's First Musical Operetta

The Nile Choir opens the Nile Project's artistic process to amateur musicians and [...] 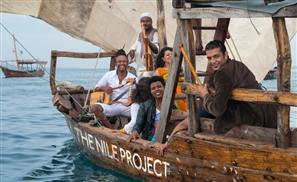 The Nile Project Comes To Cairo

The huge project of musicians from the entirety of the Nile Basin are coming to [...] 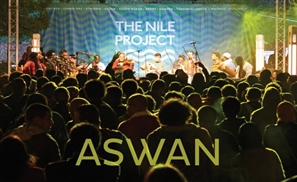