Egyptian author, Danny Arafa, just released his very first illustrated children's book and it's brilliantly filled with values the whole world should be brought up on. 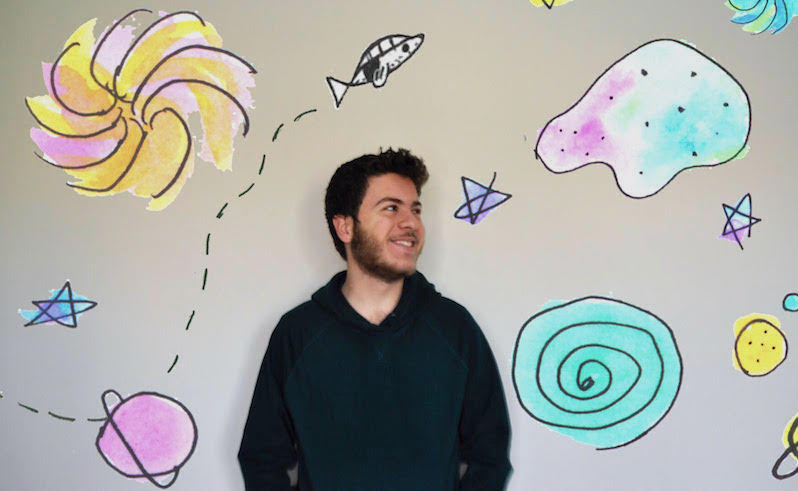 “I made a promise to myself to never forget what it was like to be a child, I guess I'm still clinging onto that promise.” – Danny Arafa

When you think of children’s book, the immediate association with an Egyptian author is not made. Perhaps this is because Egyptians are thought to be harsher on children than other nations under the pretext of ‘toughening them up’. It seems that this is slowly changing, and proving it is Egyptian art enthusiast, cartoon lover, and author Danny Arafa. Running free with his continuously blooming imagination, creating an innocent work of entertainment, Arafa has just published his very first kid’s book, The Dace that Flew to Space, and it’s filled with all kinds of brilliance!

The book recounts the story of a rebellious fish that travels from earth to space in order to escape the big wart man; who took everything from the world and sought to become an evil king. “[The dace] fit the story rather perfectly. It was this simple grey fish that no one had any reason to care about… People tend to care about the larger animals, which look more impressive. I feel like having such a regular fish as the protagonist plays around with that concept,” explains Arafa.

The book describes the traits of animals, nature, and plants and addresses the need for nature “to be as free as can be” from all things evil. The plot proves that with the help of one other we can make the evil in the world disappear because, in one way or another, we are all connected. “I wanted to portray the earth through the eyes of an alien coming from space, the way it would see it. Most books either focus on the beauty of the earth or they focus on the dire state it is in. I wanted to do both,” the author tells us. Indeed, the aesthetic beauty of the world is juxtaposed with the ill-willed beings that momentarily taint this image. When asked about the environmental themes, Arafa speaks passionately, “I find it rather odd when books make sweeping statements about the environment, they just make it seem like the world is hopelessly lost. I made sure to show causes and consequences. For example, the evil man cuts the trees, which led to deforestation, he littered the oceans, which led to pollution. It's important to show that human actions - not just human existence - are what direly impact the many facets of nature.”

Not only has Arafa portrayed the various aspects of nature through words, but also through art. Watercolour illustrations of the solar system, forests, the ocean, animals, and their homes are peppered throughout the book in hues of the galactic spectrum - blues, reds, pinks, and purples. Arafa also cleverly overlaps colours to attribute a maximum level of creativity to each worldly wonder. “In Van Gogh’s The Starry Night, he used lines to show the movement of the lights in the stars to bring them alive. I don't want to compare myself to Van Gogh or anything, but I believe that the overlapping of colours highlights their fluid nature, which, in turn, makes the art seem more alive,” describes Arafa intricately.

As an all-time lover and fan of media directed at younger age groups, Arafa hopes that the entertainment that's created for children remains free from the restrictions that adult entertainment is bound by.