Film critic and CairoScene correspondent Wael Khairy heads to the illustrious Tribeca Film Festival in New York, attending a special talk by two of the most influential directors in Hollywood today. 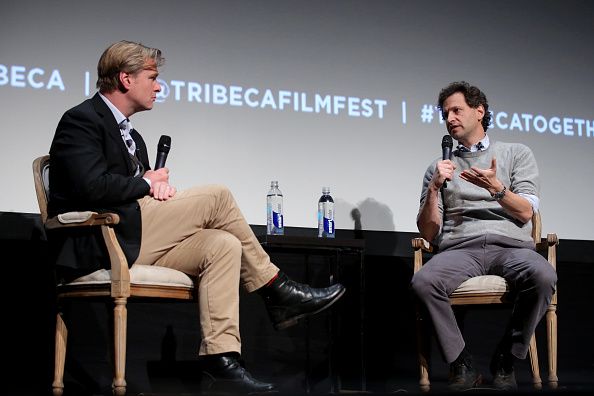 On a Monday evening in a packed house at the Tribeca Performing Arts Center, the crowd erupted in applause as critically acclaimed directors Christopher Nolan and Bennett Miller took the stage. “Just to make things clear…how much of that was for him and how much of it was for me?” joked the two-time Academy Award nominated Miller, turning applause into laughter.

Before attending this delightful talk between two of this generation’s most prominent directors, I wondered who was responsible for making both auteurs go toe-to-toe in a Tribeca discussion. After all, their work couldn’t be more different. Miller is more driven towards heavy dramatic independent films such as Capote, Moneyball, and last year’s Cannes favorite, Foxcatcher, whereas Nolan is a blockbuster sculptor with a multi-billion dollar resume.

It turned out to be less of a discussion and more of a Nolan interview. Although, I would’ve loved for the spotlight to be shared by both directors, it made sense for Miller to moderate Nolan in a house full of Nolan fanboys. If IMDb message boards have taught us anything, it’s not to tick off Nolan fans.

After a brief, yet probably unnecessary, run through Nolan’s impressive filmography, Miller started to ask all the right questions. Right off the bat, it felt like one mastermind was challenging the intellect of another. Miller’s first question was if there’s a continuity of themes throughout his work.

“Not really, I try and begin every film with some interesting questions. If there’s some continuity, I’m not very conscious of it – except for leaving questions at the end of the film,” replied Nolan.

Miller, however, had done his homework, pointing out that he re-watched some of Nolan’s film the previous night, and noticed that both Inception and Interstellar revolved around a main character that tries to overcome extraordinary obstacles to reach a very simple yet human emotion. In Inception it was to reunite with his wife and kids. Similarly, in last year’s Interstellar, the main character had to travel through time and space to reunite with his daughter.

Nolan’s insightful reply channeled towards the balance between family and work: “The process of getting married and having children… I’ve tried to use that in my work. I can just always be driven by things that are important to me. I can look out the window and see my kids playing in the grass and that becomes the key image in Inception. I’d rather be out there playing with them than writing a script, but you use that emotion.”

The conversation then tiptoed to various random subjects from the importance to preserve film in a digital world, to his policy or lack of policy when working with different styled actors. At one point Miller asked Nolan about his first memory of film, to which he replied:  “My first memory of going to a film is probably seeing Snow White in re-release. I very much remember seeing the evil witch; the evil queen who transforms herself into the witch with the apple, and being absolutely terrified and going down on the floor of the movie theatre behind the seat.”

When asked about his current worst fear, Nolan said that it’s to embark on a project that you fall out of love with. “The big fear is that you get halfway through and think, ‘No, this isn’t something I really care about anymore.’ So before I embark on a project, I just have to test it, however I test it, my writing drafts or living with it, thinking about it. You have to be sure that you’re going to be as happy to be obsessed with this project three years later.”

There was a lot of talk about Nolan’s early career, and how watching Star Wars for the first time changed his life. He also modestly mentioned how he was lucky to be where he is today, because his budgets gradually increased throughout his career, so he never really felt that giant leap from making indie films such as Following and Memento to mega-blockbusters like The Dark Knight trilogy and Interstellar.

It comes as no surprise that Miller kept steering the conversation towards the work that most resembled his own, Memento. “Memento is a classic example of what can happen when you don’t know what you’re doing. As you learn more and more, it gets harder and harder to put aside the rules. Making unconventional films is precarious business.” Nolan’s answer very much reminded me of Spielberg reminiscing about his early years as a filmmaker: “As I was younger, I was more courageous, or I was more stupid. So when I think of Jaws, I think of courage and stupidity and both of those things existing underwater.”

Towards the end of the discussion, the floor was opened to to the audience for questions, most of which revolved around young aspiring filmmakers asking for advice. The last question triggered the talk’s biggest laugh. “Alright…so at the end of Inception…” The fan wanted to shine some light on Nolan’s personal interpretation to the film’s ending (the spinning top). Bennett Miller then stepped in and tried to spare Nolan from answering the question. “I asked him that myself before coming out. He said it’s not for public consumption.”

The great Christopher Nolan did not need any help though, as he brushed off the question with class. “I’m certainly not going to answer that or I would have put it in the film.” He further explained that providing an explanation would kill all the interesting viewer interpretations out there, and he’d rather leave it up to the viewer to decide.

I leave you with how mastermind, Stanley Kubrick, elegantly tackled a similarly posed question: “I would not think of quarreling with your interpretation nor offer any other, as I have found it always the best policy to allow the film to speak for itself.”