Emad El-Din Aysha shows no mercy as he tears into the plot, casting, and themes of new Egyptian film, Kidba Kul Youm. 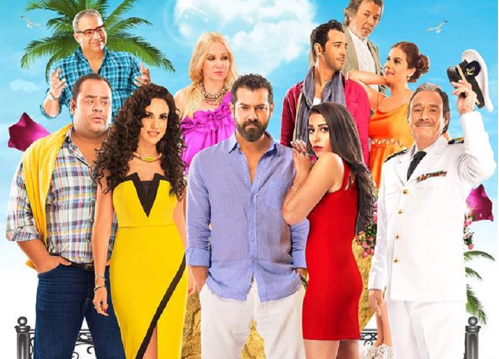 Kidba Kul Youm (2016) – A Lie for Every Day – is a very hard movie to classify. Is it a lighthearted comedy or a romantic drama? Neither. The story is purportedly about two couples with (shock, horror, disbelief) marital problems who go on a vacation to a beach hotel resort and their relationships reach breaking point, almost messing up other people’s relationships in the process, too. However, the story just drones on and on, with very little to distinguish it.

You feel like the film was just an excuse for the actors to get a tan at the expense of the hapless producers – there’s ‘seven’ of them – and the unsuspecting director, Khaled El Halafawy. His only claim to fame is Zana’at Sitat, a hilarious movie that did sport a couple of good themes.

Aisha (Dina El Sherbiny) is married to advertising executive Hisham (Amr Youssef) and she’s angry at her husband for not treating her like a wife – whatever that entails – and insisting on living it up like they used to before they tied the knot. Hadya, played by the super hot Tunisian actress Dorra, is married to a fat oaf of man, Adel (Mohamed Mamdouh), and wants to live it up all the time, getting doped up at one point and humiliating her husband in public. (She spent time with a boy and then falsely claimed he’d kissed her to get her husband jealous and into a funky mood, only it backfires and he later divorces her). Hadya means ‘calm’ in Arabic, Adel means ‘just’ and Aisha seems to be an allusion to ‘just wants to live’.

We’ve seen it all before and there’s not much in the way of originality or moral and psychological depth here. The story doesn’t add up, either. Hisham is supposed to be in the hot seat for his business shenanigans, but that plot thread isn’t followed through and, most of the time, we just have Hisham and Adel drinking while their respective wives trade pieces of advice on how to lose a man.

Then a subplot intrudes as the flirtatious hotel owner, Sherihan (Sherein Reda), recruits Hisham and Adel into her diabolical scheme to scare off her daughter’s sweetheart. They just tell him the facts of life and that’s more than enough to put him, and us, off marriage for good. The rest of the time, they try to repair the damage, along with three old geezers – Sherihan’s ex-husbands, each purporting to be her daughter’s true father – who have no earthly reason for being in the movie to begin with.

It’s tame in the extreme; the title doesn’t have that much to do with the goings on, and there are very little goings on. The cinematography makes you feel like you’re watching a commercial for the Ministry of Tourism, and the music is pastiche and clichéd.

The casting is confused, too. Dorra is gorgeous and exotic but she’s too classy and gentle-looking for the ‘wild’ role she has to carry out here. She does a good job, mind you, using dark makeup round her eyes and dreadlocks in her hair to give her a party-girl feel – she looks like she’s beefed up a bit, too, but it still doesn’t work. You just can’t believe her smoking hashish. The blubber butt playing her husband is better cast, needless to say, but his performance is so flat you don’t sympathise with him enough. Amr Youssef is the quintessential blue-eyed devil and, while technically the main character here, he doesn’t drive the story or narrate the events and doesn’t go through any substantive enough transformations to garner any respect here.

Dina El Sherbiny, admittedly, is perfectly cast as the highly-strung type but, again, she’s so taut you don’t side with her at any point in the story, especially when she admits to being a party animal before wedding Hisham - aka Amr Youssef. That might explain the scene - practically the only funny one in the movie - where she’s dressed up as a cat. She freaks Hisham out to the point that you begin to understand why he can’t get along well with her.

Now the subplot, which inexplicably involves Farouk El Feshawi as a dilapidated sea captain named after Ezz El-Din Aybak of Mamluk fame, sees Tarek El Tilmisany (who looks, as always, like a Lebanese mercenary) and Bayoumi Fouad as a freethinking author who hates marriage but is too overweight to do anything about it. All were formerly wedded to Sherihan and lay claim to her daughter Sheri (Abeer Hariri), and interfere when it comes to her prospective hubby Seif – meaning ‘sword’ – (Karim Qassem).

Abeer Hariri’s miscast herself. While attractive and upper crust, she looks a little too old for the teenybopper role, with phoney pigtails to boot, that come and go without occasion. If Sheri was the loose cannon type you could make sense of the three (absent) father-figures, but the whole problem is she isn’t. She’s practically the only one that still believes in marriage in the whole movie. Seif’s mother is the traditionalist who wants to dissuade him from marrying Sheri, too, but this plot thread isn’t pursued to completion at any level - thematic, melodramatic, or otherwise. Seif is such a dope you don’t want him to marry Sheri, and much the same holds true of the other youngsters in the film who seem to spend their time doing the bidding of the older crew. Age discrimination, anyone?

I will say one thing in favour of the movie: you can see why marriages are going wrong throughout the country - it’s cultural imperialism, pure and simple. People, young and not so young, are living other people’s lives while trying to be true to themselves and their traditions at the same time, in a kind of emotional delirium where they don’t know what they’re imitating or why. This is most evident in the female characters, especially Hadya and Aisha; they get into an altercation with each other when Hadya speaks too freely about how cool Hisham is.

In another pep-talk scene, you find Aisha talking about how women nowadays have become too independent and think they can dump a husband like an annoying boyfriend. Still, by the end of the story, you feel that the only lie perpetrated in the movie is against the audience, who just coughed up cash for nothing!