Regardless of what critics and the US government have to say about Zero Dark Thirty, two of Hollywood’s most promising females, Katheryn Bigelow and Jessica Chastain, make the controversial movie worth watching. 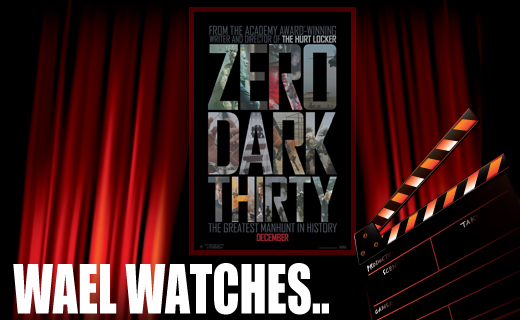 In 2008, Katheryn Bigelow became the first female director to bag a Best Director Oscar for her Iraq war drama, The Hurt Locker. This year, she’s a strong contender to be the first female director to win two Best Director Academy Awards. Although not as intimate and personal as The Hurt Locker, Zero Dark Thirty is a magnificent achievement of epic proportions, and I can’t imagine how this film could’ve turned out any better.

It chronicles around the greatest manhunt in human history, the long search for Osama Bin Laden. The film focuses on the single-minded determination of Maya to locate the terrorist. In that sense, it works both as a character study and a report on the incidents leading to perhaps CIA’s most accomplished mission.

There probably isn’t a single viewer out there who doesn’t know how this film ends, but make no mistake, this is one of the most suspenseful films of the year thanks to Bigelow’s concentrated, intense pacing. There’s always a threat of a characters losing their lives in this long dedicated attempt to bring an end to the world’s most wanted man. Zero Dark Thirtyspans a decade from the horrific events of 9/11 to the Navy SEAL raid on Bin Laden’s compound in Abbottabad, Pakistan. The scenes of that operation will have you gasping for air. They feel authentic, realistic and accurate.

Even though the film has been criticized for promoting torture as a method of interrogation, I beg to differ. In fact, if anything the film shows that torture was not the primary force that led to Bin Laden’s death, but rather careful monitoring and a deep understanding of how Al Qaeda’s network works.

The film benefits from a strong cast lead by the great Jessica Chastain. Chastain is a remarkable actress who seems to have come out of nowhere to take Hollywood by storm with her sudden workaholic-like attitude towards acting. Last year alone she gave six powerful performances in films that gained much critical acclaim. Two of those films ended up battling against one another at the Oscars, and this year Zero Dark Thirty is an even bigger threat to the big prize than anything she’s did last year.

The young actress was discovered and handpicked by Al Pacino for a reason. Chastain already has a second shot at Oscar glory since her momentous breakthrough last year. It’s great to see female actresses and, particularly, directors being taken seriously in Hollywood. Here, Bigelow shows the world that her directorial effort in The Hurt Locker was not a one hit wonder and Chastain carries a rather heavy film effortlessly on her shoulders.

I don’t know how much of Zero Dark Thirty is fact or fiction, what I do know is that it’s most definitely one of the year’s best films. Even if it’s not a great historic retrospective piece, it’s hard to argue against this being a great movie. The long quest to end the reign of Osama Bin Laden is brought to life in horrific detail; at the film’s most climatic scene, you’ll forget you’re even watching a movie.