The latest round of Absolut Art saw some seriously skilful brushwork at Cairo’s own Art Talks Gallery, and the results speak volumes for themselves 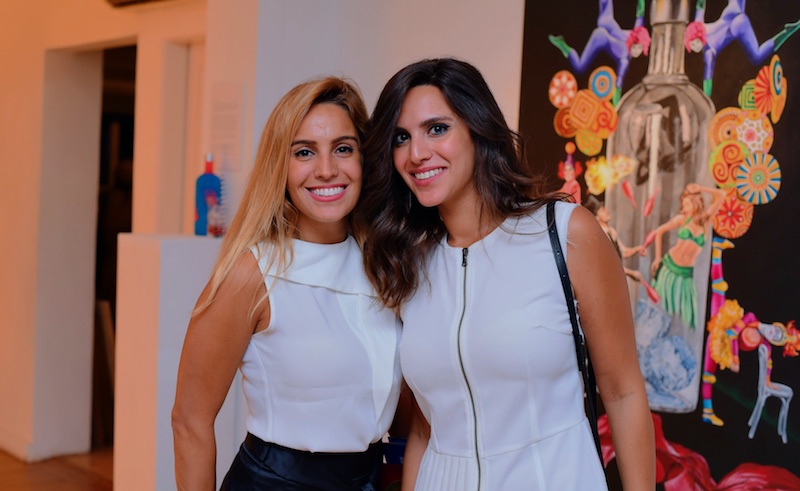 What do you get when you put a bunch of outrageously talented young Egyptian artists, a healthy amount of Absolut vodka, and an even healthier bunch of painting supplies together? An art gallery filled to the brim with the some of Egypt's brightest young creatives, following in the immortal footsteps of the dandy Andy Warhol (who started it all); the lucky winner got an all-expenses paid trip to sunny, sinful Ibiza, and have their work immortalised in Absolut Art’s timeless archive of (slightly alcoholic) art, as well as that of the ever-glamorous Art Talks. Seeing as we’re not exactly the lazy type, we went ahead and had a few words with the top two prolific painters; the first place winner and whimsically colourful (and quite worldly Ayda Mansour, and the typographically trendy runner up Omar Mobarak, just to get an idea of their journey to where they are what goes through their vibrant minds, and how it all translates into works of pure beauty.

“I get my art background from my family; my grandmother was the curator of the Mahmoud Khalil Museum, one of the first private gallery owners, and a prolific interior decorator whose work shows in many of Cairo and Sharm’s hotels. She always used to take my sister and I with her when she’d paint, we’d just try to paint anything, even scribbles, and she would broaden our artistic scope. When we would travel with her, she would take us to all sorts of events; theatres, museums, biennales and galleries.” Ayda’s uncle (a renowned photographer), as well as her mother were also massive inspirations, encouraging her to pursue whatever talent she had, and pursue she did; she’d enrol in all the art classes she could, so that she would enhance her passion. When she was in High School she had received an Award ‘Artist of the year’. “I draw my inspiration from everything I see around me; an interesting combination of colours, scenery, objects, people, or whatever captures my eye. I’d take a picture of it, commit it to memory or just reminisce about whatever it is I saw that piqued my interest.” Ayda makes skilful use of colours; managing to convey a sort of feel, a mood out of elements that don’t necessarily mesh together, but come together to create the work that she’s famous for. “When it comes to inspiration, it’s so broad that I can’t necessarily pinpoint it on one particular thing.” Ayda had previously worked with Absolut last summer; painting Ahmed Ganzoury & Karim Nabil’s seaside Kiki’s Sandbar, eventually getting her hands and brushes on a huge 3-meter Absolut wooden bottle. “I started painting the bottle and I got super inspired, I used a lot of vibrant colours and all sorts of different figures.” Her work was eye-catching and bold enough that she was contacted to participate in Absolut Art’s latest competition, drawing heavily from her love of the circus. “I wanted to portray the process of having a drink; as the ice cubes melt the world begins to transform to another dimension filled with a combination of beautiful emotions. The colours become brighter, the imagination grows wider, the talent is revealed and the joy is heightened, that is Absolut. It’s one of the few brands that invests in art, they have a lot of beautifully painted bottles every year using all sorts of different designs, by artists from all around the world. I wanted to go in a fun and creative direction; one with a lot of emotions, and a lot of talent. I thought that was the best thing to do; an Absolut circus brimming with amusement.

I wanted to portray the process of having a drink; the ice starts melting, the colours become brighter and everything becomes inspiring, and for me, that is Absolut.

Ayda sure wasn’t sparing any details when it came to her work in the competition, drawing from all manner of elements both from her vivid imagination, and from Egypt’s culture as well. “The circus captures endless possibilities inspiring one to a universe of opportunities. As time passes, the bottle begins to expand its boundaries, and the elements locked in, become free. The inclusion of the belly dancer among the circus represents diversity, a feeling that is exclusive to Absolut. The brand itself has a lot of diversity, so the creative process of everything to do with it, made me want to add part of my culture. Adding a bit of Egypt to Absolut’s art, conveying the several emotions and wilder imaginations included in the bottle’s representation.” So it’s absolutely no wonder that Ayda managed to walk out with a ticket to Partyville all the way in Ibiza. Though It may have been a competition, and only one of them got a chance to travel to sunnier pastures, in the world of art, ranks and positions mean next to nothing. Prolific typography talent and long-time Absolut artist Omar Mobarak – who managed to come in at arbitrary second place – also left his unique mark on the annals of Absolut Art history, and his story is much akin to his work; short, sweet and straight to the point (not unlike Absolut). “Drawing has always been something I've done since I was a kid, but it didn't really come up as something that I would make a career out of until I was about 22. In college, I was out of options and ideas of what major to pursue just to graduate, so I went with art because it was genuinely the only thing I liked enough to stick with.” A story that almost anybody out there can more than relate with, and as luck would have it, Omar’s own mentors guided him to the path of the (symbolically) immortal pop-up artist and Absolut godfather, Keith Haring. “While I was studying, a painting professor suggested to look into Keith Haring since; he could see a bit of his style in my work, and I think the moment thatI really started to love art was through looking at Keith's work and reading his story. This inspired me to look into art movements, specifically from the late 1800s all the way up to pop-art. Mainly, my interest lies in how the artists during that time communicated their stories through abstractions and expression, and that's what I try to achieve with my work.” As for how he found himself in the competition, he aptly (and humbly) relayed to me a story that any self-respecting creative can identify with; one full of tension, anguish, and unwashed clothing. “I actually found out about being part of the competition the night they held the first party for the artists, I had to jet from Haram to Zamalek. I remember wearing a t-shirt all day and figured I should probably change, so I left my car with a friend and snagged a fresh t-shirt from my trunk before going in and changed in the street.” Society be damned indeed. Though Omar might care more about function over form in his day-to-day life, he expertly achieves both on equally high levels in his work, and it shows. “I had some idea of what I'd like to do, but since I haven't worked on anything in that scale or with paint in years, my fear/anxiety about it pretty much made it impossible for me to do anything until a couple days before the deadline. I pretty much pushed through hours of self-loathing and doubt, staying up really late because I wanted to make sure I made it to a point where I felt good about it. Eventually, I got there and it was easier and a lot more fun at that point.” Spoken like the truest of true artists. As for his modus operandi, Omar put it in a few succinct words:  “The direction I took used a typography style I like to use in my sketchbook when I want to write words that can't be read as a pattern to represent the environment. It is what it is, I’d love to have told you some click bait story about the process behind it but, it’s just a very standard struggle for a creative, just hating life till something happens.” I pretty much pushed through hours of self-loathing and doubt, staying up really late because I wanted to make sure I made it to a point where I felt good about it.

Kudos to both of you struggling young visionaries, and a hearty toast to Absolut, their artsy initiative, and to Art Talks for all the wonderful support for Egypt’s burgeoning young community of artists. If you find yourself looking for some mind-nourishing abstract creativity, check out Ayda’s Painted World for some inspiration, and while you're at it, browse some of Omar's trendy AF urban streetwear on his brand UNTY’s Facebook page and Instagram, and if you're in the mood to stimulate your creative side with artwork from around Cairo's magical creative scene, pay a visit to the endearing Art Talks gallery for all their wonderful work.