British photographer, Christopher Wilton-Steer gives us his insight into the bustling world of craftsmanship in Darb Al Ahmar through his photographs. 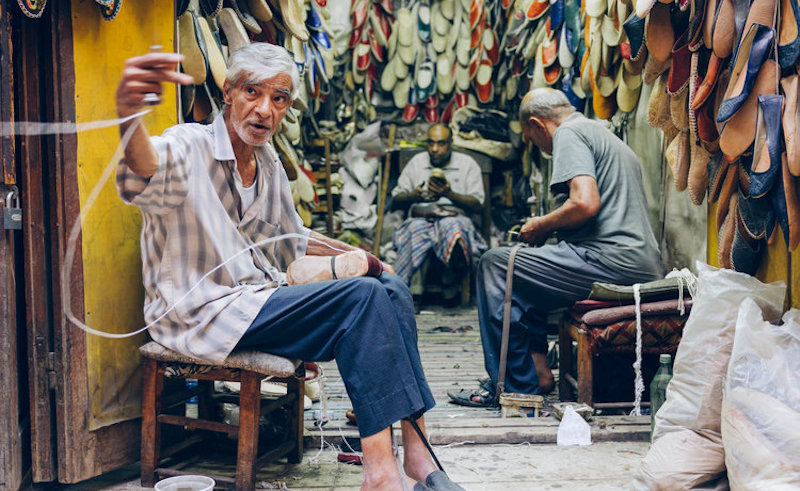 In an era where crafts and arts have lost a personal and unique element in the pursuit of mass production and trends, lays an area in Egypt that still retains a classical approach and the spirit of its history when designing and manufacturing its goods – the criminally overlooked and often ignored Al Darb Al Ahmar district, which is the subject of a sprawling new photography exhibition set to go on show between March 22 and April 24 at London’s Royal Geographical Society.

But the exhibition, by British photographer, Christopher Wilton-Steer, goes beyond Al Darb Al Ahmar's clusters of rundown buildings and into the daily lives of a thriving artisanal community. The Artisans of Al Darb Al Ahmar documents the workshops of the historic area's craftsmen, going on a visual journey detailing a dying art bred within the decaying streets and congested alleyways of a poverty-stricken neighborhood. The photographer, who had his first taste of the district back in 2016, had come to Egypt for a different project. Having visited Al Darb Al Ahmar to capture the mosques and monuments that were being renovated by the Aga Khan Foundation, he didn’t realize he’d be falling in love with a completely different muse: the area’s enduring craftsmen. I couldn’t believe products were still made in this fashion in such volume inside cities. Where I am from, we have lost much of our manufacturing heritage so you don't see this kind of activity taking place very often.

“I was amazed by what I saw; workshop after workshop producing such beautiful and interesting things,” an enamored Wilton said of his decision to return to Al Darb Al Ahmar to turn his lens onto these workshops and the passionate craftsmen behind them through his photography.

“I wanted to document their work, share my fascination with others, and inspire interest in the district,” says Wilton of his project. "Many of the workshops go back several generations and the craftsmanship has roots that go as far back as the Pharaonic period. The craft that probably evokes the neighbourhood’s history most vividly is al-khayamiya (tent-making). It is the local appliqué work,” muses Wilson of the crafts that he feels most expresses the essence of Al Darb Al Ahmar.

“For centuries these artisans produced the kiswa to cover the holy Kaaba in Mecca. Today, tentmakers produce a variety of textiles from table cloths to wall hangings and pillow cases using Pharaonic, Islamic and folkloric designs.” In awe of the spirit that elevates the area beyond what meets the eye, Wilton tells us of the pride with which members of the community describe their humble abode, seeing it through a completely different lens than most.

“It is a heritage site and a spiritual place. If you wanted to create a neighbourhood like this, you could not. It is impossible to conceive of all the elements that you find in Al Darb Al Ahmar. Even the rich people in Cairo come here at times like Ramadan because it brings them something. We are lucky to have been born here,” relays Wilson as he tells us the words spoken to him by Hasan Adri, a khayamiya maker. Subsequently, it’s not simply the end product of the craft for Wilton; that’s merely one part of what he believes to be a brilliantly peculiar puzzle.

“I was amazed by what they were able to create with simple tools, know-how passed on through generations and their hands," says Wilton as he refers to the craftsmanship techniques passed down from father to son. But no story is without its heartache; the neighborhood along with its craftsmen seems to be wilting out of existence through sheer neglect and lack of proper means to validate their craft to the world. In a time where the concept of word of mouth has morphed into a digital revolution, it’s a shame to see unique skills that can be traced back to traditional methods dating to our ancestors, slipping through the cracks of a social media kingdom. And that's why Wilton took on the photography project.

In the absence of a vibrant market, many of these crafts may not last another generation. The loss of this rich cultural heritage would be significant. The world and Egypt would surely be poorer because of it.

“For me, the work of the artisans has a meaning and value perhaps lost to many of us in our increasingly complex digital lives. I became increasingly concerned that this knowledge and skill could be lost within a generation if the business climate did not improve for the artisans,” tells us a concerned Wilson. “Worryingly, the future of many of these crafts is under threat. The number of tourists have halved between 2011 and 2016, while the cost of raw materials has increased. The loss of this rich cultural heritage would be significant. The world and Egypt would surely be poorer because of it.” Described by one of the artisans as “the soul of Egypt”, the rundown area is beautified through the eyes of the talented photographer. When asked about his favorite photograph from the series, he picks the one portraying the carpenter's workshop from out on the street.

“The carpenter is working away in this narrow shop, fashioning a bed head late into the evening. The lighting, colours and composition make it look, to me at least, like a painting - a quality possessed by all my favourite photographs. I studied art history for seven years so maybe that has something to do with it.”

You can check out more of Wilton's work here.

All photos courtesy of Christopher Wilton.