From Oral, to Written, to Digital: How Egyptian Poetry Progressed Through History

Here, we take a look at Egyptian poetry right from the first records, and watch how it unravels to the poems we see today. Once upon a time, when the Arab world was indistinct and the cultures between Arab nations were unclear, Arabic poetry all fell under the same umbrella. It’s widely agreed in the world of literature that Arabic poetry is far more colourful, vivid and cultural in comparison to poems coming from the West, using vibrant descriptions of the landscapes and general atmosphere surrounding them.

If you want to get a thorough understanding of the Arab timeline, then all you have to do is take a look at their literature. You’ll find stories of the long and tedious days of the Bedouins, to the ages of the Abbasids, Caliphates and colonial occurrences, all the way to the scattered revolutionary uprisings - which are quite a few. All of it has been recorded in the Arabic world of poetry, and Egypt is no exception to that stack.

Pre-Islamic Poetry aka the Jahaliyya Poetry 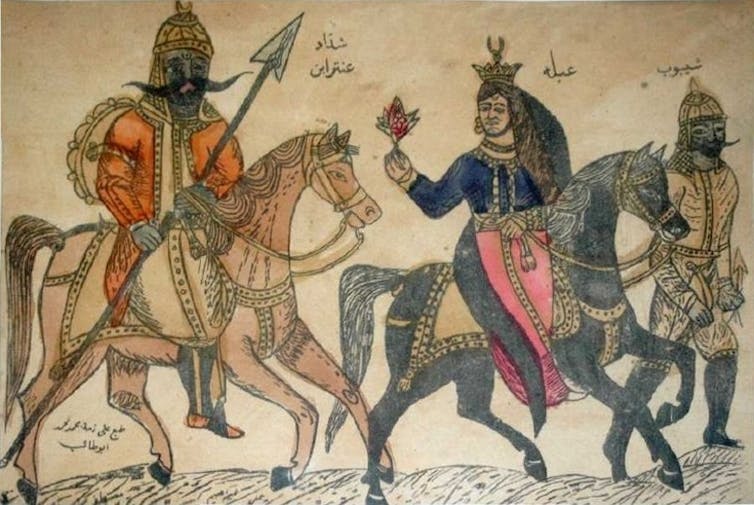 Before the Islamic age washed upon Arab shores, poetry used to be an oral practice. Arabs had the skill of strong memory, reciting poetry and passing it down many generations. This is why the Qur’an is known as a timeless token from the past, using complex vocabulary and grammar structures. It is built on pre-Islamic poetry – most of which went unrecorded – maintaining the same quality and essence. Back in the day, according to Lit Hub, literature was widespread, and the learning of arts were few in comparison to those who sought more academic degrees such as science or math.

Poetry reciters (also known as Rawis) were considered noblemen, as they would use their poetry against their enemies – kind of like how a rap battle works.

The themes back then were relevant to what they saw around them – deserts. However, they didn’t have poetic devices such as similes, but would use personification to describe the desert and other elements related to their lives.

However, according to Lit Hub, the 'technical complexities' of the earliest poems recited by the Rawis were so advanced, showing that this has been a practice that’s been ongoing for maybe centuries. They held a high position in terms of respect, as they were considered to be the “preservers of ancient language and poetic style.”

Al-Nahda and the Impact of the West Al-Nahda – also known as Egypt’s Renaissance, or the ‘awakening' – began when western influence began entering the Arab world. Poetry started seeing a change of things, with reformation and modernisation. Egypt began focusing on political aspects, rather than the ‘literal’ daily tedium routine of the nomadic life that we saw in earlier literature.

We begin to see imported expressions like similes and metaphors that came after the rise of the Ottoman Empire, and thus began a whole new world, as Aladdin would put it.

Romantic poetry became a trend, in Arabic known as Ghazal. Poets began to express their sentiments, usually finding the beauty within the pain, or vice versa. They took to expressing the loss of homeland, or took forms of Arab nationalism, putting emphasis on the Arab identity.

We can particularly see this in Ahmed Shawqi’s poems, as he expresses his yearning of the Egyptian land during his exile in Spain, as well as his patriotic poems.

Decades of Revolutionary Poetry in Egypt Poetry was thus used as a means of rebellion in Egypt. Amal Dunqul, Salah Jahin, Ahmed Fouad Negm, Abdel Rahman al Abnudi. You’ve heard their names before, as they’re often echoed in modern times on television, in the streets, and in (intellectual) social spaces.

Your hangman is a lawyer, and your protector is a thief.

Their poems have been reiterated since their making in Egypt, resurfacing when political problems arise as they are wont to.

We began seeing poetry expressed as street art or graffiti, with quotes from the aforementioned revolutionary poets of the 1960s and 1970s painted on the walls, to express similar sentiments to those of 50 years ago.

“When it’s hard to find meaning in life’s difficult moments, people sometimes turn to [poetry], thumbing through a dusty anthology or asking for advice on a poem to read at a loved one’s funeral, for example, or sharing a poem that can speak to a national tragedy,” Andy Young wrote in The Writing on the Wall: Graffiti, Poetry, and Protest in Egypt from Los Angeles Reviews of Books.

“Standing with my family in Tahrir Square […] I must admit to feeling a charge in observing that poetry is part of the dialogue,” he added.

The Digitalisation and Modernisation of Poetry

In the digital age, people are taking to the internet to express their opinions – whether it’s through social media posts, or better yet, creative endeavors and digital projects. This gave people more room to play around with their words, not having to anticipate the direct approval of their audience, while hiding behind a screen.

Egypt today sits at a number of crossroads-political, social, geographical, and cultural. Like the country itself, Egypt's literature is pulled in several directions at once, embodying both the tensions and the possibilities that lie ahead for this ancient land by the Nile.

Publishing houses also flourished, such as Dar Sharqiyat, which brought forth the Sharqiyat Generation – a new wave of writers and poets no longer confined to the traditional modes of expression. The internet presented open platforms and opportunities for the exponentially increasing population to have outlets of expression with an audience. Sound Cloud, YouTube and Facebook became popular modes of expression for poetry and music in Egypt.

Mostafa Ibrahim is a prime example of modern Egyptian poets, utilising SoundCloud to recite his poetry online. He speaks of topics such as existentialism and understanding life, issues that go hand-in-hand with the 21st century dilemma - a dilemma as common as the common cold. His book of poems Al-Manifesto went viral after the political uprising, going widespread and resonating with the people, and getting sold out only six months after its release.

There’s a sense of growing displacement in Egypt, and we can deduce that from the evolution of poetry coming from the north African country. Poetry has been ingrained in Egypt for centuries before it was first recorded, given the complex and detailed structures of the poems we saw coming from earlier than the 6th Century, and how embedded poetry was throughout the eras. It never slowed down, as it transformed through the ages, bringing us to where we are today.

Where do you think Egyptian poetry will go next? Let us know in the comments.