$1 Million Worth of Seed Funding for Egyptian Students from the Clinton Foundation's Hult Prize?

If you're a GUCian (or not) with a knack for social entrepreneurship and can innovate ways to tackle the world's refugee crisis, you might just have a shot! 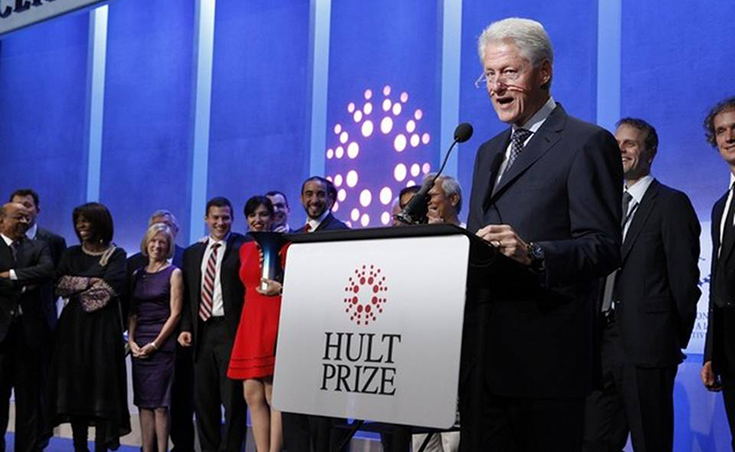 Young people are often told they’re not experienced enough, they are not knowledgeable enough. They are told that their aspirations and ideas won’t materialize until they’re no longer young, and by then it’s usually too late to see them through and so we trap them in this vicious circle.

What we should be telling our youths, however, is that this very ‘lack of knowledge’ is their strongest asset, we should teach them that the answers to the problems of their time lie within them because you can’t adopt someone else’ solutions. We should teach them that inexperience can sometimes lead them to take on more than they can chew and eventually grow wiser than people triple their age.

One organisation striving to instill these values in the world’s future leaders is Hult Prize, part of the Clinton Foundation. “One of the top five ideas changing the world,” according to former US President Bill Clinton, the Hult Prize foundation is one of the world’s largest student organisations with chapters in universities across the world.

Every year, a student group is awarded $1 million in startup funding to change the world. What’s the catch? They have to earn it by coming up with innovative social entrepreneurship ideas to a given problem or the year’s President’s Challenge – Bill Clinton challenges the foundation’s students across the world to tackle a global issue of his choice. Egypt’s very own German University in Cairo (GUC) has a proven track record in kicking ass at the Hult Prize global competition, coming in second last year.

“Even though we didn’t qualify, it is still a great opportunity for young and aspiring entrepreneurs because they have the chance to network,” the Head of GUC Hult Prize’s External Relations Mai Habiba tells us. “An investor, who was also serving as a judge at the regional competition, offered our team a six month incubation in Singapore!”

This time, they plan on kicking even more ass as they go in with their guns blazing to tackle this year’s President’s Challenge – the world’s refugee crisis – through social entrepreneurship. To this end, the GUC chapter of the Hult Prize foundation is holding a competition where the university’s student teams will battle it out among each other with their ideas to solve the world’s refugee crisis in front of a panel of judges made up of faculty members, who then determine which team has the best idea. The winning team then gets to represent the university in the regional and, hopefully, the global competition.

Do you have an idea in mind that you think is worth pitching? Do you think you can help the millions of refugees fleeing their homes in search of a better and safer life? This is your opportunity; gather a group of students (each team is allowed one member from a university other than GUC), sign up to the GUC’s team competition before November 11th, and win!