5 Ways to Fix the Constitution

In his CairoScene debut, an elusive character by the name of Keyser Barbatoze explains a few things the new constitution didn’t introduce (that it totally should have)... 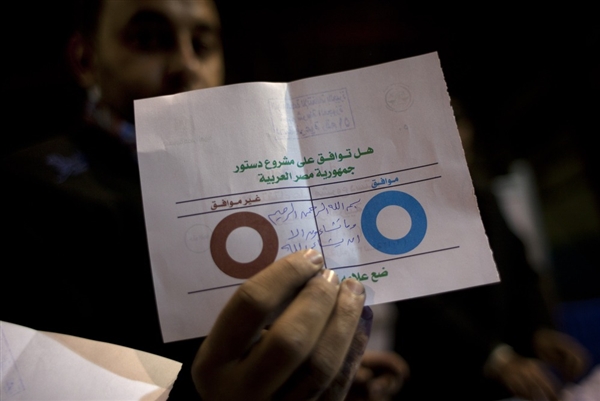 Some things, you can just set your watch by. You will always semi-seriously consider online dating websites exactly 30 seconds after seeing the first ‘Look at how cute my boo is’ picture on Valentine’s Day. You will always watch exactly eight minutes of the new Big Bang Theory before realising holy shit, what am I doing? And finally, within the first week of every December, Egypt will have a new constitution. Like Santa got done with it early and felt like surprising us. Aww, you shouldn’t have.

No, seriously, fuck off. You’re in no way qualified to pass legislation, you fat tampon.

Every year, I eagerly wait by the mailbox for that brand-spanking new bill of rights and every year, I’m disappointed. Because the Presidential Palace throws out my letters and never listens to my suggestions. Well, someone finally messed up and put me on the Internet, Adly Mansour, so YOU CAN’T IGNORE ME NOW.

Winner of the 2013 Poker World Championship (he also does something in politics?)

5- Requiring Cafes to Block at Least One Lane of Traffic

A constitution isn’t just the building block upon which the hopes and dreams of an entire country are placed. It should also be a reflection of the evolution of a society. Times are changing and I haven’t spent the last six years meticulously updating my Benedict Cumberbatch fanfiction blog to have Reuters call us a ‘developing country.’ Fuck that.

What’s the next step? Why, starting the trends of course! Our lovely ‘urban’ cafes, with their ‘deep, alt-melodic urban’ car horn soundtracks and du jour air pollution, are the symbol that we’re poised to take Queen Bee status. We’re inches away, so close you can taste the low-cal fro-yo. Then what the hell is stopping us?

I’ll tell you. It’s the holdouts. The rebels. The free spirits who think that it’s okay to hold back an entire civilisation’s worth of progress for the sake of petty things like ‘zoning regulations’ or ‘customer safety.’ Lynch them all, I say, and throw those chairs in the street where they belong. Drag the shishas and syrupy mocktails out there too. Hell, make ‘em build their kitchens in the middle of Salah Salem. No one ever got to the top through half-measures.

Fade in on an unnamed Egyptian high school. The students are assembled, it’s 8 in the morning and I haven’t had a chance to smoke a joint on the football field yet so time is passing as rapidly as molasses. The familiar drum roll sounds, although its distorted so badly I can’t help but wonder if it was recorded on Nems Bond’s latest gadget, the armpit microphone. No matter, I can do this. I open my mouth and join in the cacophony.

So far so good.

See, if you wanted me to remember it, you need to make it applicable. Instead of an Orcish war chant that makes morning assembly sound like Hitler’s pep talk before the invasion of Poland, make it about something I can relate to. What better than Daft Punk’s ode to every young man’s eternal quest to get laid?

Although much like Hitler’s invasion, that quest also ends badly.

We get it, Egypt. There’s a lot of bad shit going down right now and you need to feel in control of something, anything. Like any man going through a mid-life crisis, you want to do something big and flashy. It’s perfectly natural and we won’t judge you for it.

Unless you do shit like this. Then we judge your small penis and your Saudi heritage.

But all that said, isn’t the death penalty for drug dealers a little melodramatic? I’m not going to get all philosophical about drugs or their merits but I’ve bought drugs next to a police station. I’ve bought drugs next to a policeman. I’ve bought drugs from a policeman. You’re obviously not upholding this law (which is for the best), so you look like a pansy. You really want to get the people on your side? Legalise it! Let’s look at it from your perspective. You’re poorer than Kenny and you want to subjugate an entire population. Let us do it ourselves. It won’t cost you a dime. Hell, you can tax the ever-loving shit out of it and make a few pounds off the whole ordeal. The best part is, do you really think anyone’s going to get out of bed and trudge all the way to Tahrir to stand under our motherless bitch of a sun when there’s some sweet brown relief in the living room?

Take part in a historically-unprecedented revolution against a cruel despot with millions of my compatriots while the world watches with bated breath? Nah, I’m all set here man, thanks.

I’m sick. I’m sick of watching heart-warming Christmas movies and just wondering what that beautiful white stuff feels like on your skin, whether snow forts are as magical as they look and what taking a snowball to the face feels like.

“Feels fucking orgasmic is what it feels like, Barbatoze!”- This bear, obviously on a ludicrous amount of cocaine.

Thankfully, it’s times like these the nearly unlimited power of our benevolent government comes into play. They’ve shown us time and time again that they can face down the most fearsome of foes. Among their many conquests were such monstrous titans as unarmed protesters, gays, Christians, foreigners, journalists, the terrible legions of the Muslim Brotherhood…

So it stands to reason that our brave boys in khaki could rustle us up some of that sweet, sweet white, can’t you guys? Should be easy right? Roll a couple of tanks up into Switzerland, maybe barricade a main street or two? Claim self defence and set a ton of shit on fire? Look, I’m not going to stand here and tell you how to do your job. You can beat the sky with sticks for all I care, just make the right people ‘disappear’ so I can go outside one day and not feel like Satan came in my mouth then farted sulphur on my doorstep.

1- Instituting Absolute Freedom of Religion That Includes Shiites and Bahais, and Acknowledging That the Principles of Islamic Sharia Are a Goddamn Backwards Thing to Base Laws That Apply to the Entire Country On.

No you’re right, that’s a little ridiculous. We should moderate our expectations.