Bey2ollak: From Roads to Riches

Last year, we sat down with Gamal Sadek - one of the five founders of Egypt's ultimate traffic app - to talk about the start-up's unprecedented success. Why a year later? Well, let's just say we were stuck in traffic... 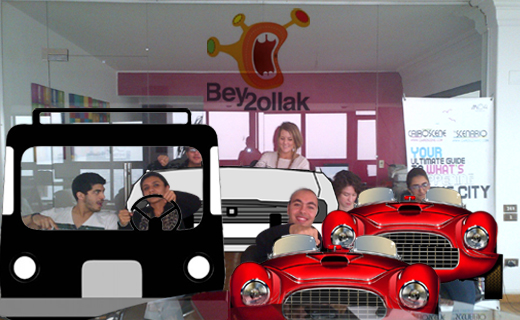 There isn't a person commuting in Egypt today that hasn't wished for a miracle to happen to save them from the terrors of traffic. In 2010, like an angel of an app, Bey2ollak descended from a virtual sky and into our pockets, helping us navigate the streets of Cairo with a little more ease, thanks to the crowd-sourced, constantly updated information it provides on the most notoriously blocked routes in the capital and beyond. Since then, the app has become a household name for Generation Y and the first thing we think of before leaving home, the office, the club or anywhere else, for that matter. The unprecedented sensation Bey2ollak has become in its short life of three and a half years now has become the benchmark for tech start-ups in Egypt, so we called in Gamal Sadek, one of the five founders of the company, to talk streets, success and our own silly ideas…

So let’s start at the very beginning, back in the days before Bey2ollak, when we were left to flail about helplessly in Cairo traffic with no one to light the way. How did it all start?

Well, my cousin, Aly Refea, and I came up with the idea….

OK so you and Aly came up with the idea…

Aly had this realisation that most traffic information in Egypt is communicated informally, with people close to you, like “Eh akhbar el kobry?” Radio was perhaps the only source of formal traffic information but that’s inconsistent and inconvenient. You need information about traffic more than just twice a day.  It was that epiphany that sparked it all…

Well, actually, the name had a life of its own. It just sort of came to me, and I registered it not even knowing exactly what we were going to create. Whether it would be a website or an app or even anything to do with traffic, I just had a gut feeling that Beyollak was a good name, and that it would work. Once we’d bought the domain name that sort of crystallised everything for us. It made it real and catalysed the whole process…

So there’s you and Aly, an idea, a domain name and then what?

We launched in on October 10th 2010 and we never thought it would be so successful. So before we launched we would gather every Friday with friends and family from different fields and we’d talk about the idea; it became sort of a forum and the five founders in the end became me, Aly and Mohamed Refea, all computer science graduates and we were responsible for development. Mostafa Beltagy, a Business Administration graduate who’d be in charge of marketing, and Yehia Ismail, an architect, responsible for UI and design.

What were the biggest challenges you faced launching Bey2ollak?

Before this I didn’t know what entrepreneurship was and everyone was coming in with a skill and not money. But the advantage of a tech start up is that doesn’t need that much money; the important thing is the core competence of the whole team. To have had to hire someone like Yehia would have cost so much money.

It was also very hard, culturally speaking, to launch this. We have a culture of failure, a fear of failure and of course families rarely get behind the idea of entrepreneurial spirit. It was hard to get people to take me seriously.

How did you decide how to launch?

We did a small survey online and we found that there are a lot of people willing to use a mobile app,  so we wanted to go in that direction. None of us had built a mobile app before. We chose to start with Blackberry as there was little Android and iPhone penetration at the time. We decided to not spend on marketing at all as well; we wanted it to come out virally and organically. Until this day, we still haven’t spent on marketing.

How did you decide on the logo?

Tone of voice was very important to the brand; we wanted to remove the barriers of understanding, a lot of these people don’t write pure English or Arabic fos7a, we write a mix of both, so we chose this direction to effectively break down the barrier.  I wanted it to feel like a mate is telling me about traffic. The choice of language was very important and we’d end up talked about one word for ages!

What were your expectations on launch?

On our launch date there were only a few very basic routes and areas listed and we didn’t have any targets for registrations.  We were mainly doing it according to where we lived, for example, if I was in Zamalek, it was my responsibility to update it. That’s how we worked it at the beginning.

The first day we ended up getting 6,000 registered users. I was going to play football that day with a few people I didn’t know, I got there and they were talking about it! It was an amazing feeling to have reached people I don’t know. The second day we got an email from Vodafone, asking to meet with us. At first I couldn’t even believe it was Vodafone! Someone there had picked up the idea and they wanted to understand what we were doing.

So how did you end up working with them?

Vodafone put their logo on the app for free, in return for free marketing on their social media platforms, once every two weeks and until January 2102,  we had not earned a single penny. They did an online press release and now everyone thinks we’re a Vodafone company, which we aren’t, but it definitely gave us credibility. Now there is a proper mutually beneficial agreement in place.

How did Bey2ollak work during the revolution?

Aly and I were very emotional and we didn’t want to think about the business. Mohamed, who’s a little older, however insisted we need to work and we need to keep going. Then we discovered that the app usage increased, especially after Twitter and Facebook went down. People would go on and ask where marches were or where the baltegeya were. So we introduced two features that really helped people, because the software was very adaptable; Khatar (Danger) and El7a2ny (SOS). Until now I don’t know the number of the police or fire brigade in Egypt, but I know in the app all these numbers are there. After we put this feature out, we tried to be very active on social media and it helped. The Twitter went up to about 45,000 followers (now 104,000).

So how did you expand from there?

We applied for Google’s ‘Ebda2’ competition for startups; the winning company would get $200,000 and we still hadn’t earned a single penny until that point! We won and people thought we’d get the cheque straight away but it goes directly into investment . With or without Google I was going to continue, this was not the make or break for me.

So… You’re making money from traffic! Do you feel guilty?
We are a road companion, it’s not about traffic, it’s about supporting people through crowd-sourcing.

How does your family feel now?

They now acknowledge the success and they’re very proud; my dad gets his friends and explains the app and shows it to them! I still feel there’s a little bit of yalla, do your masters, what’s next? Do something proper, go do an MBA…

Who is your competition?

Waslay, Tareeky… One of the key things is we have our own brand and a very strong personality; they are just trying to copy something.

If you could have spent the Ebda2 money on anything you want, what would it be?

I’d buy a house in France.

If you could use this crowd sourcing software from Bey2ollak to find out any information, not necessarily traffic, what would it be?

For example, we would ask the Egyptian crowd where there are the most mozzas…

For more information on Bey2ollak and links to download the app on your smartphone, visit Bey2ollak.com